With a weakening stock price making equity issuances to fund growth unpalatable, the infrastructure giant turns to its dividend as its new funding source.

In a sign of just how deep the oil market downturn is impacting the industry, energy midstream giant Kinder Morgan (KMI -0.92%) announced Tuesday evening that it was slashing its dividend 75%. It's a deep, and until recently, unexpected reduction, coming despite the fact that the company has limited direct exposure to commodity prices. However, with a crisis of confidence that quickly spiraled out of control, the company was left with no choice but to slash its payout, and divert that cash elsewhere.

Growth comes at a cost
Kinder Morgan's decision to reduce its dividend really boiled down to the fact that cash is the cheapest way to fund its backlog of growth projects. As of the end of last quarter, the company had $21.3 billion in primarily fee-based, demand-driven projects in its backlog that it needed to fund during the next five years.

Until recently, it hadn't had any problems issuing a combination of equity and debt to pay for these projects. The slide below notes that it could fund highly accretive projects using a 50/50 blend of debt and equity because both were fairly low-cost sources of capital. 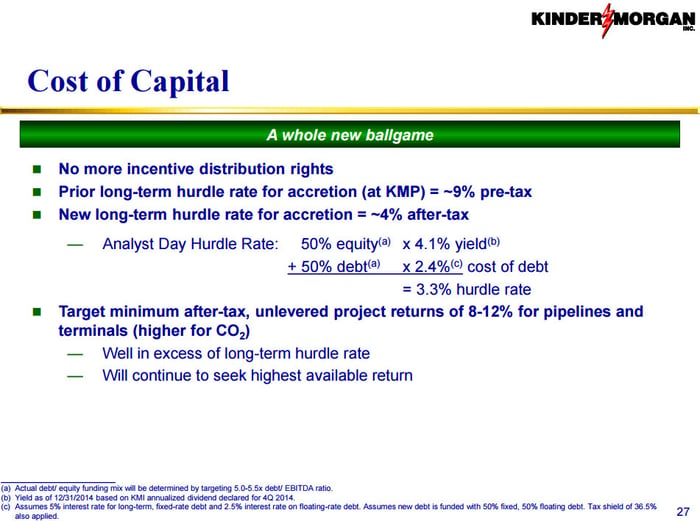 However, with Kinder Morgan's stock price cut in half during the past few months, issuing equity was a non-starter for the company because its yield had spiked. And with a debt-to-EBITDA ratio already scraping the limits of investment grade, the company couldn't borrow the money and hope that its stock price would improve so it could issue equity later. In fact, the company has made clear its desire to protect its investment-grade credit rating, and that's what it's doing by sacrificing its dividend plan for the time being.

Sometimes, the hard choice is the right choice
There are two things that Kinder Morgan made very clear in the announcement that it was reducing its dividend. CEO Steve Kean said that: "Today's action is not a reflection of our underlying business -- our business is strong and growing. Today's decision is about finding the most economic way to fund our set of attractive return expansion projects."

In other words, despite what the stock price says, the underlying business is doing quite well. It's on pace to grow cash flow by 8% next year to slightly more than $5 billion, which is quite a fete in today's commodity price environment. That said, the company refuses to grow just for the sake of growth.

Kinder Morgan will defend its investment-grade credit rating, and won't issue equity at unattractive terms, because either choice would weaken the company. Instead, it's simply going to invest from a position of strength, which means it needs to divert cash that it was intending to pay to shareholders, and use it to invest in its compelling backlog of fee-based, demand-driven projects -- a backlog that the company expects to create long-term value due to the strong project-level economics, which are simply too good to pass up.

Investor takeaway
Despite a strong underlying business backed by fee-based cash flows, the market lost confidence in Kinder Morgan because it's in a panic due to the persistent weakness in oil prices. That led to a self-fulfilling prophecy of sorts, with Kinder Morgan really being left with no choice but to cut its dividend, and use that cash to fund its growth until confidence is restored in the market. It's a quick turn of events for a company that had promised robust dividend growth through the beginning of the next decade, and really shows just how quickly the market can turn.

The main takeaway is clear: Kinder Morgan's underlying business remains strong, irrespective of stock price. Further, it will only grow stronger with the company diverting substantial cash flow back into it during the next couple of years to both reduce debt, and build additional cash-generating assets. While the dividend news might sting in the short term, it's clearly a move that's being made with the long-term health of the company in mind.