Comparing Williams Companies (NYSE:WMB) to Kinder Morgan (NYSE:KMI) is a lesson that higher dividends don't always equate to better companies. Williams currently sports a tempting 6.8% yield ahead of Kinder Morgan's 5.2%, but Kinder Morgan could be the better dividend stock to buy. Here's why.

One of the biggest concerns with high-yielding energy stocks is if they can sustain their current dividend distributions. A great way to find out is by comparing a company's distributable cash flow (DCF) to its dividend distributions. Kinder Morgan's DCF for the nine months ended Sept. 30, 2019 was $3.639 billion, or $1.60 per share. It paid dividends of $0.75 per share during that time frame, making the dividend coverage ratio 2.13. 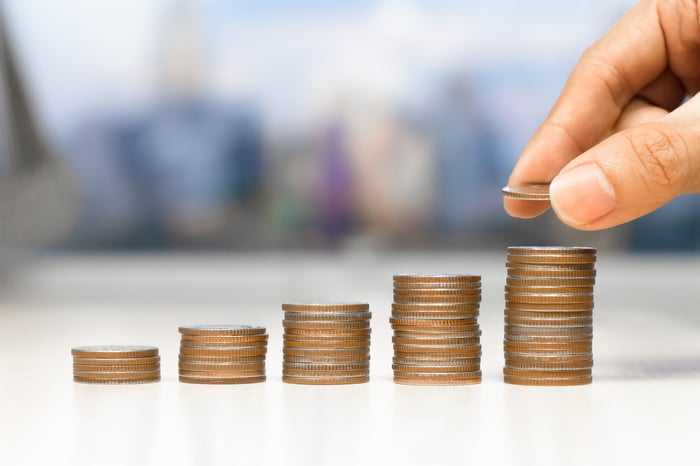 In terms of future dividends, Kinder Morgan plans on increasing its annual dividend 25% in 2020 from a current annual distribution of $1.00 per share to $1.25 per share. At the stock's current price, this would result in a yield of 6.25%.

Williams reaffirmed the strength of its dividend in 2020, stating, "20[20] Guidance will improve free cash flow and maintain strong dividend coverage." Williams increased its annual dividend by $0.16 per share in 2018 and again in 2019.

That said, both stocks have a rocky past of dividend cuts. Kinder Morgan slashed its dividend by 75% at the end of 2015 as a result of the oil downturn. Williams followed suit in mid-2016, cutting its dividend by 68%. Both companies have since raised their dividends, but brutal dividend cuts such as these taint the strength that dividend investors look for in a long-term investment.

Cash flow from dependable and predictable customers is a big thing to look for in midstream companies. Williams and Kinder Morgan are leaders in this metric, giving investors peace of mind.

Both companies have also decreased their spending, leaving more capital to pay down debt and dividends.

Williams' capital expenditures decreased 37% and Kinder Morgan decreased capital expenditures by 22% when comparing the nine months ended 2018 to the nine months ended 2019. Williams' Q3 2019 debt-to-adjusted earnings before interest, taxes, debt, and amortization (EBITDA) ratio was 4.47, and Kinder Morgan expects to end 2019 with a net debt-to-EBITDA ratio of 4.6. These ratios are somewhat high compared to competitors such as Enterprise Products Partners or Magellan Midstream Partners, but the efforts by both companies to cut spending could prove to be a step in the right direction.

Up until this point, the comparison between Williams and Kinder Morgan has resulted in a virtual tie.

Kinder Morgan separates itself from Williams with its ability to decrease spending and "use internally generated cash flow to fully fund dividend payment and [the] vast majority of growth capital expenditures." That growth is largely targeted in the Permian Basin and Bakken formation, the largest U.S. shale plays.

One of Kinder Morgan's goals is to take advantage of the oversupply of natural gas in the Permian Basin that pushed spot prices at the West Texas Waha hub negative in April 2019 and again in May 2019. Large shipments of gas are dangerous without pipelines, but storing natural gas instead of transporting it can be expensive, leaving many producers' hands tied without pipelines.

In response to buyers who are champing at the bit to transport gas out of the Permian, Kinder Morgan is building two main pipelines, one of which went into service in September. The second is expected to go into service in early 2021.

Kinder Morgan's growth prospects are exciting, but Williams isn't without its share of powerful revenue drivers. Q3 2019 results were 7% higher than Q3 2018, primarily due to a 28% EBITDA increase in Atlantic-Gulf revenues and a 17% increase in Northeast gathering and processing.

The large Atlantic-Gulf increase was driven primarily by two projects, the Atlantic Sunrise and Gulf Connector, which are expansion projects to Williams' 10,000-mile-long Transco Pipeline.

The Transco Pipeline system is one of the most valuable North American pipelines, delivering gas from Appalachia's Marcellus-Utica shale to the Gulf of Mexico. Expansion projects such as the Gulf Connector project are aimed at positioning Williams to be a supplier of natural gas to liquefied natural gas (LNG) titans like Cheniere Energy's (NYSEMKT:LNG) Corpus Christi Liquefaction Project, the second largest project of its kind in Cheniere's portfolio.Cheniere has gained approval from the U.S. Federal Energy Regulatory Commission (FERC) for its third and final liquefaction train after commissioning the second train in July, putting Williams behind a solid growth story. According to Williams', Transco, alone, is expected to generate $2.5 billion in annual fee revenue by 2022.

Kinder Morgan gains the edge because it's taking advantage of Permian customers willing and ready to sign contracts with minimum 10-year terms. Williams is just a whisker behind in second place, a high-yielding dividend stock that plays the  U.S. natural gas market well by simply building on its successes such as the Transco pipeline system.

Arguably the biggest causes for concern for both companies are the 2015/2016 dividend cuts and somewhat high debt-to-EBITDA ratios when compared to other large North American midstream companies. That being said, investors looking for a company that has exhibited years of calculated capital spending, and as a result is poised to benefit from continual growth in the Permian Basin and the Bakken, could consider Kinder Morgan as a potential investment.