Here's a hint: High consumer demand had a lot to do with it.

Data source: Ford Motor Company. Adjusted figures exclude the effects of one-time items. Wholesale units represent the number of vehicles shipped to dealers and are rounded to the nearest thousand. 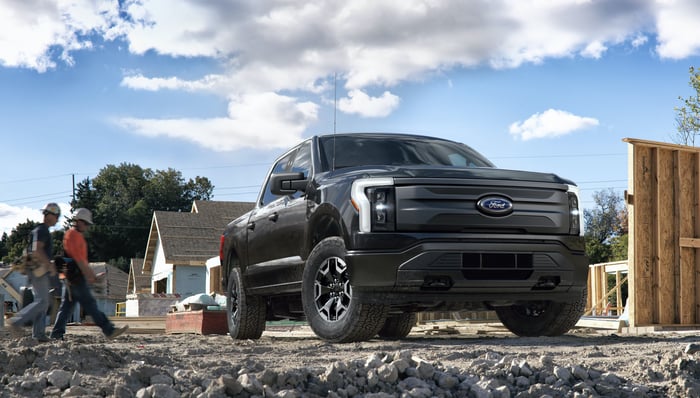 The second quarter of 2020 was an exceptionally rough one for nearly all automakers, Ford included, as the COVID-19 outbreak forced most auto factories to shut down for several weeks. Although 2021 has been better, chip-related production disruptions held Ford's sales back despite strong consumer demand.

Offsetting the impact of lower shipments to some extent, that strong demand helped Ford's financing arm to a record profit and significantly reduced the company's spending on sales incentives.

Here are highlights from the automaker's business units:

What Ford's CEO had to say

"The demand for our first round of high-volume EVs clearly has exceeded our most optimistic projections," CEO Jim Farley said during the earnings call. "The reservations for the F-150 Lightning have now climbed well past 120,000 units, and 75% of those customers are new to Ford. We are now working around the clock to break constraints and increasing our manufacturing capacity for these red-hot new battery electric vehicles."

Farley said that Ford is working with its battery suppliers, LG Chem and SK Innovation, to increase annual battery capacity for the Mustang Mach-E by 70%, and that it's taking "similar action" ahead of the launches of its electric E-Transit commercial van, due this fall, and the F-150 Lightning pickup early next year.

Looking ahead: Ford raised its guidance

CFO John Lawler said that Ford has raised its forecast for full-year adjusted EBIT by about $3.5 billion since its last forecast in April, to between $9 billion and $10 billion. Lawler said that Ford expects sales volume in the second half of the year to be about 30% higher than in the first half, as chip supplies improve and Ford is able to restock depleted dealer inventories.

Lawler also said that auto investors can now expect Ford to generate positive adjusted free cash flow of between $4 billion and $5 billion for the full year, on improvements in working capital as its production returns to normal levels.