The media giant announces quarterly results on Thursday afternoon. There's a lot riding on the report.

Time is ticking, and that means that the mouse hands are moving at Walt Disney (DIS 0.85%) this week. The media master reports fresh financials after Thursday's close, and given its pole position in many entertainment markets and the stock's wide ownership among retail investors, it's fair to say that a lot of us will be watching.

Disney stock is having an off year. Many popular blue chips are hitting new highs this summer, but the House of Mouse is actually trading 2.5% lower year to date through Monday's close. With its arsenal of theme parks, cruise ships, and blockbuster movies, it would seem to be a no-brainer play for the reopening of the economy in 2021, but things haven't gone according to plan. A strong financial update could change things. 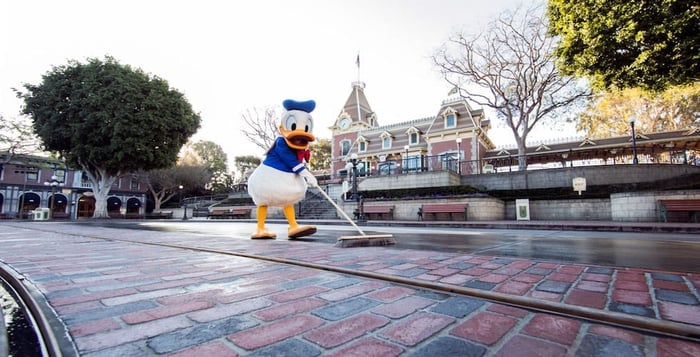 Wall Street pros see a big year-over-year jump in this week's numbers. Analysts see Disney checking in with revenue of $16.8 billion for its fiscal third quarter, a nearly 43% increase from the same period a year earlier. The bottom line should be even better, as the profit of $0.56 a share that the market is targeting would be a sevenfold improvement.

The rub here is that Disney was far from optimal in the fiscal third quarter last year. All of its fully owned theme parks were closed through April, May, and June of last year. Theatrical releases and cruise vacations weren't happening. Live sporting events were rare on ESPN. We spent a lot of time at home consuming Disney's media networks and streaming Disney+, but obviously the entertainment bellwether wasn't firing on all cylinders.

The real comparison here will be Disney's fiscal 2019 performance, and it's not pretty. Disney earned $0.79 a share from continuing operations (or $1.35 a share on an adjusted basis) on $20.3 billion in revenue in the fiscal third quarter of 2019. Put another way, Disney is clawing its way out of the pandemic, but it's not anywhere close to running at peak condition.

Investors also have another good reason to be concerned. Disney proved mortal last time out. It fell short of market revenue expectations in May for its fiscal second-quarter report, blamed in part on weak growth in Disney+ subscribers. The 103.6 million Disney+ accounts it had at the end of March were short of many Wall Street projections, and average revenue per user continued to decline as the platform expanded to less lucrative international markets.

We have the benefit of assessing how similar companies have held up earlier this earnings season. The news is great on the theme-park front, as two of its rivals -- Comcast's (CMCSA -1.16%) Universal Orlando and SeaWorld Entertainment (SEAS -0.39%) -- have posted blowout results in the past two weeks. Disney+ will be challenged, as one streaming bellwether posted a surprising sequential dip in viewing hours for the same quarter. Disney will also need to address how some of its biggest movie stars are now questioning what they're getting paid, given the company's box office-slurping digital distribution strategy.

The silver lining in all of this is the same point that was mentioned earlier. The stock is a rare blue chip trading lower in 2021. At a time when content is king and media stocks are royalty, Disney shares have been neglected in the market rally. Even a decent report could be enough to get Mickey Mouse moving in the right direction again.