Please ensure Javascript is enabled for purposes of website accessibility
Log In Help Join The Motley Fool
Free Article Join Over 1 Million Premium Members And Get More In-Depth Stock Guidance and Research
By Daniel Foelber – Aug 18, 2021 at 7:37AM

This integrated oil major has a lot to prove if it wants to become a leader in the energy transition.

Norwegian energy titan Equinor (EQNR 3.95%) has spent a lot of time talking about oil and gas this year, which might seem odd given that it talked a lot about renewable energy last year. Oil and gas is doing well, and Equinor's business is benefiting from it. But investors interested in the company's transition from fossil fuels to wind energy could be concerned that it is losing sight of its long-term objectives.

With that, let's dive into company updates from its second-quarter earnings and its Capital Markets Day presentation to determine if its renewable aspirations are legitimate or just for the positive press. 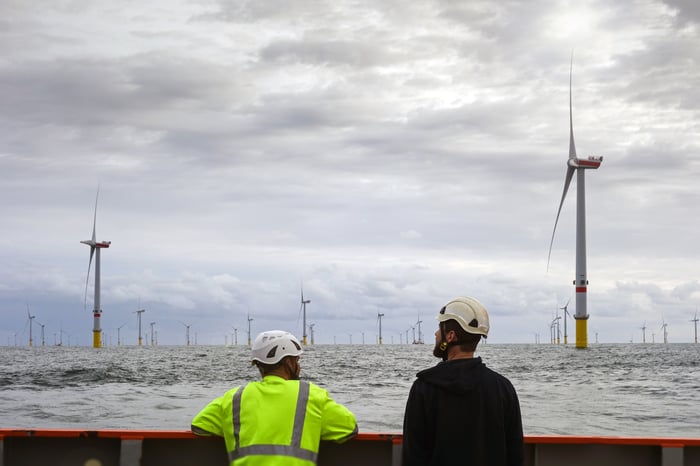 Earnings-call transcripts are useful but can leave out important nuances. Investors can better gauge management's tone and read between the lines by listening to the quarterly conference calls. Equinor's second-quarter call was a textbook example of hidden subtleties.

Management spent a great deal of time discussing the strength of the underlying oil and gas business. To Equinor's credit, its business has rebounded impressively from last year's downturn. It's on track to generate its highest free cash flow (FCF) in history. Its balance sheet is in its best shape in five years, sporting a five-year low in its net long-term debt position. And it's looking like the company is in for a solid five-year stretch of low spending and high efficiency.

That's all well and good, but Equinor's massive utility-scale wind projects garnered little attention. Three separate analysts were quick to point out the lack of coverage. The exchange was painfully awkward as management quickly realized it needs to do a better job disclosing renewable energy figures.

The response to the questions about the renewables business was basically that there's a lot of uncertainty in the space, that low-carbon investments are something Equinor believes in, that it's going to take a long time for renewable energy investments to pay off, and that early-stage figures probably wouldn't be that helpful.

Despite Equinor's immense backlog of wind energy projects, the reality is that its renewable energy division's capacity and earnings are negligible. CFO Ulrica Fearn pointed out that because the renewable business is in growth mode, investors should "expect development costs to outweigh earnings from operating assets." In sum, it seems that the company believes it's more useful to focus on the bigger picture in terms of how much money it's spending and how projects are progressing.

To Equinor's point, progress on projects is arguably more important than these early-stage quarterly results from renewable energy. But the lack of reporting quarterly figures is something that needs to change if the company wants to be considered a legitimate renewable energy stock. In the meantime, it has provided investors several updates regarding its medium-term and long-term targets for renewable energy spending.

Similar to last year, Equinor reiterated its intention to install between 12 and 16 gigawatts of renewable capacity by 2030. It also plans to invest roughly $23 billion of gross capital expenditures in low-carbon solutions between 2021 and 2026. Preliminary projections call for between a 12% and 16% nominal equity return on its U.S. and U.K. renewable development projects, assuming they are fully contracted.

The return could be a lot higher if Equinor selectively sells some of its renewable assets or is able to capitalize on the early-mover advantage it has in several up-and-coming projects. It has already had success in this department, booking $1.7 billion in total capital gains from farmdowns. A farmdown is basically when a company like Equinor sells an equity stake in a renewable asset to an outside company that wants to develop the project.

Its decision to sell a 50% stake in two of its largest offshore wind energy leases, Empire Wind and Beacon Wind, to BP might seem like a blow to its renewable energy portfolio. But in reality, Equinor has plenty of wind projects on its plate. In fact, the sale could be seen as a wise decision in that it was able to book a return and gain a valuable partner in BP.

Zooming out, Equinor plans to gradually spend more money on renewable energy and other low-carbon revenue streams as it transitions away from oil and gas. This year, it's allocating 12% of its growth capital expenditures to low-carbon investments. That allocation is expected to grow to over 50% by 2030. Although management chose to focus on the success of the oil and gas business in its recent quarter, make no mistake that Equinor's plan to allocate the majority of its spending to renewables by the end of the decade is a very serious commitment.

The investment thesis for Equinor stock is actually rather simple. It starts with a great but declining oil and gas portfolio and a 3% dividend yield. The short- to medium-term performance revolves entirely around fossil fuels, but the bulk of the long-term upside is from wind energy.

Many other oil and gas companies might tout similar energy transition strategies, but Equinor seems like it's the best positioned to make its renewable energy ambitions become a reality. Given this upside, it seems like a worthwhile energy stock to buy now.