Equinor is a big oil stock now, but it is an emerging renewable energy stock hiding in plain sight.

Equinor (EQNR -0.39%) is shaping up to be a leader in the fast-growing offshore wind industry, but no one is talking about it. Maybe it's because Equinor is currently Norway's largest oil and gas company, so it's difficult to see a transition to offshore wind. Or it could be that offshore wind is just too niche for there to be enough notice -- yet.

Oil and gas company or not, what should matter to investors is where Equinor is going, not so much where it's coming from. Here's why people should be talking about Equinor and why it could be an excellent long-term addition to your portfolio right now. 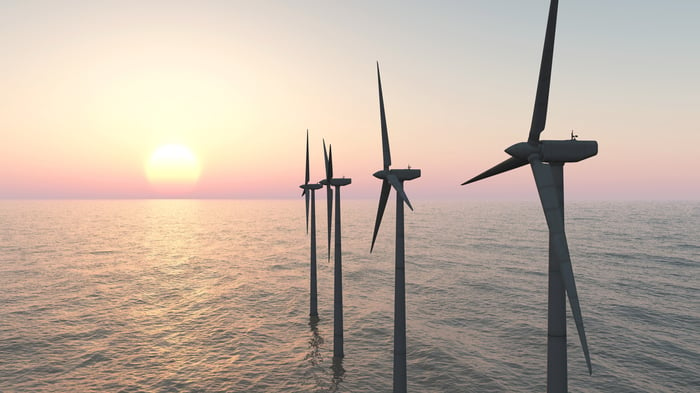 A falling tide lowers all boats

Like other oil majors, Equinor's stock is down for the year. But although it's underperforming the market, it's outperforming the energy sector and its main competitors. 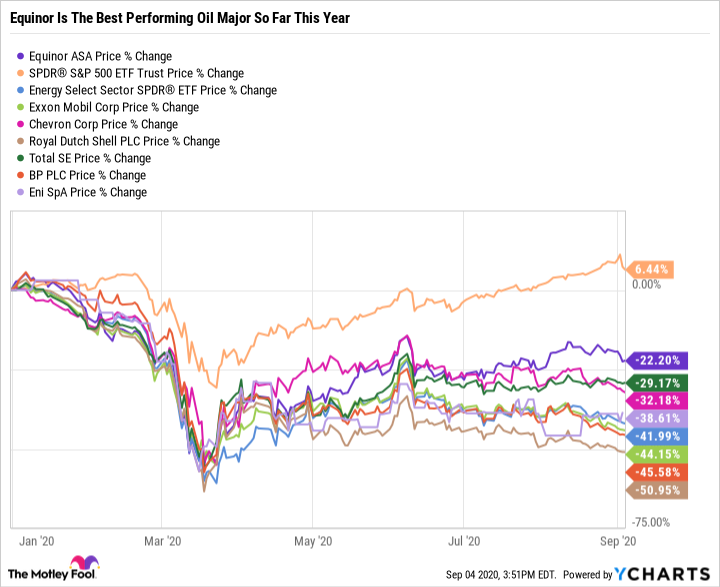 For now, Equinor is associated with oil and gas, placing it on the wrong side of a tide that continues to lift renewable energy stocks and lower oil stocks.

But like other European oil giants that want to turn into renewable energy stocks, Equinor is laying the groundwork for a full-blown transformation that could lead to renewable energy dominating its portfolio and largely replacing oil and gas in the next 10 to 15 years.

The past few months have seen a flurry of exciting updates for Equinor's renewable future.

Most recently, Equinor announced its plans to double the capacity of its two oldest offshore wind farms from about 720 MW to over 1,400 MW, increasing its total active and planned capacity from 8.6 GW to nearly 9.5 GW.

Equinor's project pipeline puts it well ahead of its ambitious goals of 4 GW to 6 GW of production capacity by 2026 and a portfolio of 12 GW to 16 GW of installed renewable capacity by 2035. Of course, the company still has to execute on its planned projects, and prove that they can be profitable, but if it does it could become the world's leading offshore wind energy operator.

Another recent development is Equinor's decision to get a new CEO, Anders Opedal. Opedal, who will step in on Nov. 2, has promised that renewable energy will be a central focus for the company.

It's reasonable to be skeptical about big oil stocks saying they are embracing renewables, given today's widespread "greenwashing" for positive PR. However, naysayers of Equinor's transition should be aware of the many reasons why offshore wind is a good fit for this energy giant.

For starters, Equinor's main cash cow has an expiration date as most of the low- and mid-hanging fruit from the North Sea has been picked dry over the past few decades. All that's left is lower-margin reserves. Although the firm has done a good job at making its operations more efficient to profit from these reserves, the company estimates that its North Sea assets could become unprofitable over the next 10 years.

That leaves Equinor with two options: Find new oil and gas assets, or go in a different direction.

Luckily for Equinor, the shallow and extensive Norwegian continental shelf and the shelf along the U.K. side of the North Sea are both ideal for offshore wind. Most of Equinor's offshore wind plans are in these two areas, although it also has an operation in the works that's 20 miles south of Long Island in addition to a few projects in the Baltic Sea.

Another advantage is that Equinor thinks it will able to utilize much of its offshore oil and gas prowess for offshore wind. In the meantime, projects like its floating offshore Hywind Tampen project will be the first renewable wind farm to power offshore oil and gas platforms when it's completed in late 2022. Hywind Tampen is just one of many projects that could lead to Equinor's business looking much different in five years.

Given Equinor is still in the early stages of bringing projects online, and that offshore wind is a relatively new subcategory of renewable energy, it's difficult for Equinor to estimate the profitability of its planned projects. For now, the company's best guess is that its renewable projects will return between 6% and 10%, but this is just an estimate and remains largely unproven. Like other companies that are pushing the bounds of emerging industries, Equinor seems more concerned with gaining a competitive edge in offshore wind, and then trusting that its first-mover advantage and ongoing declines in renewable energy costs will naturally result in profitability down the road.

As one of the largest integrated oil companies in the world, Equinor is a gem that's hiding in plain sight. The company has shown that it has the management, motivation, and dedication to transition away from oil and gas, yet it is still being weighed down with the broader energy sector. Equinor already has a first-mover advantage into offshore wind, and given the capital intensity, challenging engineering, and sophisticated technology needed to pull off a lot of these endeavors, there's a short list of companies that could realistically catch up to Equinor anytime soon.

No one is talking about Equinor stock, but that doesn't mean it isn't a good buy for long-term investors right now.

Equinor's Recovery Is in Full Swing
363%