As people discover and shop more on social media, these three companies can benefit.

Social commerce -- e-commerce sales driven by social media apps -- is still in its early days. While social media accounted for $27 billion of online sales in the U.S. last year, that number could nearly triple to almost $80 billion by 2025, according to eMarketer. 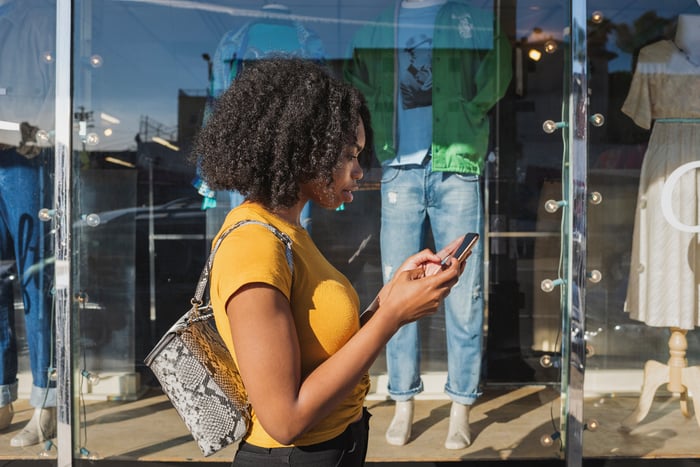 Facebook (META 7.89%) is, by far, the leader in social commerce. It launched Facebook Marketplace five years ago, and it's leaned into commerce even more with products like Facebook Pay, Shops, and more. Facebook also benefits from the tens of millions of small businesses that use its Pages feature and the 10 million active advertisers on its platform.

Facebook also owns Instagram, which may be an even bigger source for social commerce. The subsidiary launched Instagram Checkout in 2019, and it's also rolled out dozens of other shopping features, including product tags, a dedicated shopping tab, and shopping in Reels, its TikTok clone. What's more, in June Instagram CEO Adam Mosseri said shopping is one of Instagram's top priorities for 2021 and beyond.

Facebook and Instagram are far and away the biggest social media apps for shoppers to discover and buy products with. Forty-one percent and 35% of Facebook and Instagram users, respectively, discover fashion brands and products on those apps, and 51% of those actually buy through their native checkout systems, according to a survey from NPD Group.

That said, investors shouldn't pin the entire future of Facebook on its shopping features. Facebook's revenue growth is still very much driven by digital advertising. "It's just going to take a while for that compounding to become meaningful numbers. But I think the strategy is the right one," CEO Mark Zuckerberg said on Facebook's second-quarter earnings call.

Pinterest (PINS 5.92%) is practically made for shopping. It launched product pins and gave merchants the opportunity to upload their catalog to the platform in 2018. Adoption of the feature is growing extremely quickly, and Pinterest saw catalog uploads increase 50% in Q2.

Pinterest has been partnering with e-commerce platforms like Shopify and Automattic's WooCommerce in order to create pins on its platform that are more conducive to shopping. By the end of the year, it expects to launch its own native checkout feature. That would allow Pinterest users to go from discovery to purchase without leaving the app.

Pinterest can benefit from the growing acceptance of social commerce because many of its users come to the platform with shopping intent. Users are looking to plan a wedding, redecorate their home, or find a new outfit. If Pinterest can get the right products in front of its users and make it almost too easy to buy them, it could generate a ton of revenue from shopping.

Snap (SNAP 4.99%) has substantially evolved the Snapchat app since the company made its public debut in 2017. It was a "camera company" back then; now it's more like a media company. One thing Snap has continued to excel in, however, is augmented reality, or AR. Augmented reality overlays virtual graphics on real-life images captured by a smartphone camera in real-time.

AR could be the future of internet retail, and Snap isn't the only one working on AR shopping. Pinterest, for example, also has AR shopping features for its users. Instead of going to a store to try something on or ordering something and returning it when you don't really like it, AR can make it easier to shop with confidence.

Snap also has a product discovery feature -- Scan. Scan lets users point their camera at their friends, and it will find items similar to what they're wearing. Or, if you're trying to be low key about it, you can use a photo you took earlier while pretending to take a selfie. Snap's partnered with Amazon to make virtually any product searchable with just an image.

Chief Business Officer Jeremi Gorman says shopping is "the type of experience that can be threaded throughout the [Snapchat] service." Snap has Public Profiles for businesses, but shopping could also pop up in the Discover section, the Camera section, the Maps section, or your friend might send you something to buy in your chats. So, while Snap is still very early in the days of social commerce, it could catch up to Facebook and Pinterest quickly.