These companies have dividend yields well above that of the S&P 500.

With interest rates so low, investors looking for income have become challenged. Fortunately, you can turn to dividend-paying stocks to generate reliable income.

Looking at larger stocks, the dividend yield of the S&P 500 index is about 1.3%. But the dividend yield tells only part of the story since a company might not have the wherewithal to continue paying dividends at the same rate. You want the cream of the crop, and we've found some gems that have higher yields. 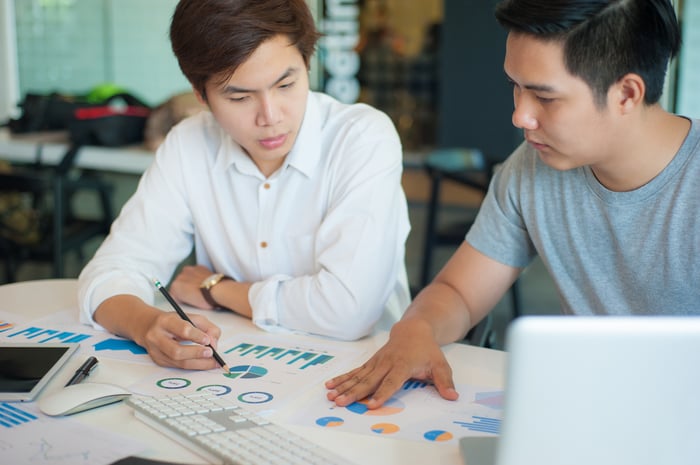 Energy company Kinder Morgan (KMI -2.48%) conducts business in one of the more stable parts of the sector. It is a large infrastructure company, owning pipelines and terminals. These transport and store commodities like natural gas, crude oil, and refined petroleum products.

The stability comes from Kinder Morgan carrying out most of its business under long-term, fee-based contracts. Some of them even include requiring customers to make minimum volume commitments.

Hence, while Kinder Morgan faces some short-term headwinds from expiring contracts, its long-term prospects look good since most of its business is under longer-term deals.

Despite the immediate challenges, the company's second-quarter adjusted EBITDA rose by over 7% to $1.7 billion. For the year, management is projecting the figure will come in at $7.9 billion, higher than management's original $6.8 billion expectation. The year-ago figure was $7 billion.

There's also plenty of cash flow to support the dividend. In the first half of the year, Kinder Morgan's free cash flow was $2.8 billion compared to dividends of $1.2 billion.

Earlier this year, the board of directors showed its confidence in the company's future by raising the quarterly dividend from $0.262 to $0.27. Kinder Morgan's dividend yield is an attractive 6.6%.

As a real estate investment trust, Realty Income (O 0.76%) must pay out at least 90% of its taxable income in the form of dividends. That makes it an ideal investment for those seeking income, but Realty Income deserves additional consideration.

The proof is in the pudding. Realty Income's occupancy rate was 98.5% at the end of the second quarter and it collected 99.4% of the rent due. With stable, rent-paying tenants, Realty Income has built an admirable dividend track record.

In fact, it has raised payments annually for more than a quarter of a century, with the latest increase in July, making Realty Income a Dividend Aristocrat. Plus, if you like frequent dividends, it makes payments monthly. At its current dividend rate, Realty Income offers a 4% dividend yield.

Just mentioned above, Walgreens Boots Alliance is a familiar name to many people with its retail pharmacies around the world. While it is a competitive area, the company has managed to stay ahead of the curve by offering delivery services at many of its locations.

Plus, Walgreens is expanding its offerings by working with VillageMD to open pharmacy and primary care facilities under one roof. It will have 80 co-locations open by the end of this year and plans to have 500 to 700 within five years.

Meanwhile, the company's results have been solid. Walgreens' fiscal third-quarter adjusted sales rose by over 10% to $34 billion. In addition, its year-to-date free cash flow was $3.3 billion, which meant it could easily afford its $1.2 billion of dividends. Walgreens' Q3 ended on May 31.

Last month, Walgreens raised its quarterly dividend by a penny to $0.4775. This makes an impressive 46 straight years with an increase. At this pace, the company will become a Dividend King when the streak hits 50 years. Walgreens' dividend yield is 4%.

While these three companies have attractive dividend yields, they also have a proven ability to continue making payments and even increasing them regularly. This is underscored by their free cash flow generation, which easily supports dividends.

For dividend investors, it doesn't get much better than high yields, strong free cash flow generation, and a commitment to increasing payments.

What Happened in the Stock Market Today
366%