Peloton Interactive (PTON -2.86%) continues to stumble after recalling all of its high-end connected treadmills in May following the death of a child and numerous injuries.

Although it will reintroduce the treadmills at the end of this month, the damage to its reputation, the lost opportunities, and the end of the pandemic boom may be too much for Peloton to regain its footing and resume its previous growth trajectory. 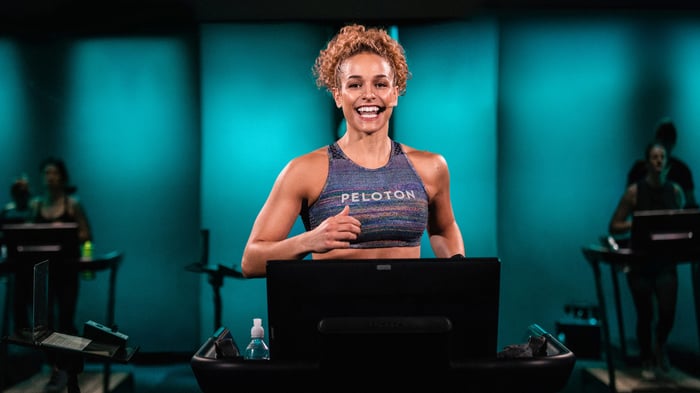 Higher revenue comes at a cost

On the surface, Peloton still looks like it's in growth mode. In its just-reported fiscal fourth quarter, revenue jumped 54% from the year-ago period to $973 million as subscription revenue more than doubled to $282 million, while connected fitness revenue was up 35% at $655 million.

But the connected fitness company also reported a much-wider-than-expected loss of $313 million, compared to last year's $89 million loss and Wall Street estimates of a $43 million loss. And it might get worse from here.

Management forecasts its current-quarter revenue will total $800 million, just 5.6% higher than last year -- much less than what it generated in the three preceding quarters and well below the $1 billion analysts had estimated. It shows the lift Peloton got from the COVID-19 outbreak may have run its course.

Peloton has suffered a number of missteps this year

Peloton's sales doubled during the pandemic, reaching $4 billion in annual sales as consumers stuck at home bought fitness equipment to stay in shape.

Yet the burst of fresh demand brought its own problems as Peloton was unable to handle the crush of orders, a situation exacerbated by massive supply chain disruptions brought on by the pandemic. Those disruptions are widespread across industries and continue today, and Peloton shipment delays became the norm, not the exception.

The connected fitness leader began building manufacturing capabilities in the U.S. and acquired Precor to help alleviate the logjam, but then it was forced to recall all of its treadmills. The equipment would allegedly continue running too long after use and could also be started by a child too easily. Peloton sought to correct the problem with a software fix, but that required treadmill users to subscribe to one of its connected fitness classes. Any treadmill owner who didn't sign up would find their unit "bricked," unable to start because it didn't have the proper Tread Lock key, which was only available to subscribers.

Peloton recently resolved that issue, and users are once again able to use the "Just Run" basic treadmill feature without having a subscription.

Competition is nipping at its heels

Now Peloton is ready to start selling the treadmills again. The lower-cost Tread retails for $2,495, while the higher-end Tread+ goes for $4,295.

Price cuts just might be in the cards, however. The luxury fitness equipment brand said it was cutting the price of its original connected exercise bike, appropriately called Bike. It will now retail for $1,495, a $400 or 21% price cut. Peloton says the purpose is to make its products more accessible, but it could also be in recognition of the fact that that competition for connected exercise is growing more intense.

Nautilus (NLS -4.22%), for example, just reported a 62% jump in quarterly sales, primarily on the strength of its own connected fitness equipment under the Bowflex brand. It was able to report net earnings of $0.43 per share, compared to a $0.17 per-share loss last year.

There are a number of reasons investors should be worried about Peloton's growth trajectory from here: more and stronger competition, its products being off the market for some time, a rash of decidedly bad press about its products, high prices, limited selection, and the primary catalyst for its meteoric rise -- the pandemic boom -- going away.

The company also received subpoenas from the Dept. of Justice, Dept. of Homeland Security, and the SEC over its reporting and public disclosures of the injuries from its treadmills.

Peloton Interactive is still growing, it has a large and committed base of users for its equipment and its connected classes, and there are rumors a rowing machine may be in the works. Yet at 9 times sales and 72 times the free cash flow it produces, the connected fitness leader is expensive, even with the stock sitting 33% below its all-time high. Investors should take a breather on these shares because Peloton's growth looks like it might be ready for a time out.