August is usually a pretty calm month in the stock market, but it was eventful this year. We saw major news from the Federal Reserve, investors started to digest the impacts of a new wave of COVID-19, and some important market trends reversed. Make sure you keep these stories in mind as we move into the back end of 2021.

August marked a clear reversal of previous trends that were important in the first half of 2021. Consumer sentiment dropped sharply in August in an abrupt about-face after more than a year of recovery. Retail sales also reflected this shift, as they dropped 1.1% from the prior month. Analysts cited weak automobile sales and concerns over the COVID delta variant as causes.

This is a red flag for a fragile economy that depends so heavily on consumers, but the impact on the stock market was modest. The S&P 500 actually rose modestly on Aug. 13 following publication of consumer confidence data. Analysts cited a positive overall outlook, and corporate earnings in the retail sector were strong enough for people to look past these results. Keep tabs on this one as you prepare your stock portfolio for growth and volatility. 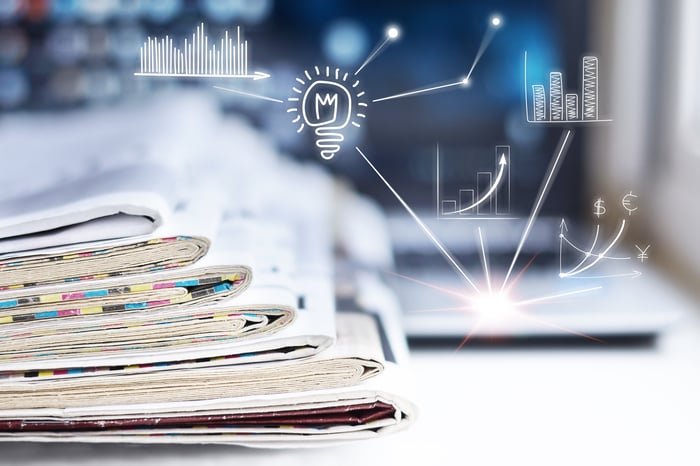 The Fed got more specific

The Fed's July meeting minutes shed some light on tapering and rate hikes, speculation around which has been influencing markets all year. Stocks are likely to stagnate or move slightly downward when interest rates rise, so volatility has followed any signals that the Fed would raise rates earlier than expected. Earlier this year, economic growth was trending ahead of schedule, while interest rates threatened to hit exceptionally high levels. That's the exact situation that would cause the central bank to halt the bond purchasing that has kept rates low.

Notes from the latest meeting confirm that the Fed will start reducing the bond-buying activity sometime this year, but it won't make any move to actually raise rates for the time being. The monetary authorities recognize that inflation is a growing risk, but the committee members also believe that the economy requires more healing before it can stand on its own without support.

The market reacted positively to the news, and growth stocks flipped a running trend that had seen them trailing value stocks, as shown in the chart below comparing the Vanguard Growth ETF (VUG -1.87%) to the Vanguard Value ETF (VTV -1.45%). Investors' risk appetite was previously suppressed by fears about interest rate hikes along with the return of COVID restrictions. The latest announcement encouraged capital to flow to higher-risk investments. 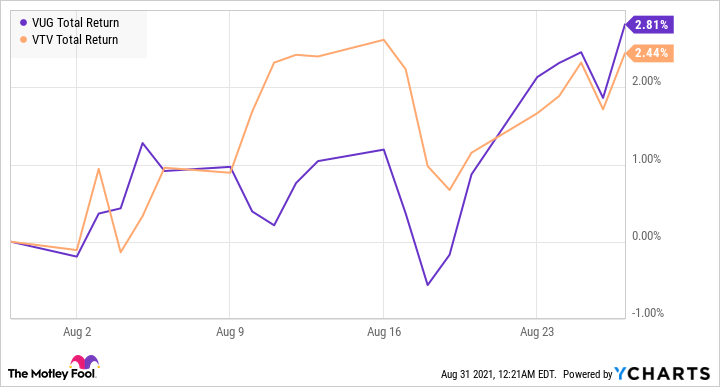 The Fed acknowledged a specific time frame for tapering while reaffirming its expectation for sustained low rates. That seems to have reduced anxiety around inflation, and it should have a stimulating effect on stocks for a few months.

Second-quarter earnings were once again encouraging. Nearly 90% of S&P 500 companies reported better-than-expected sales and profits. They are also exceeding estimates by record amounts. Results were especially strong in the healthcare and tech sectors. Materials and utility stocks were less impressive, though those sectors were also more positive than negative. Importantly, forward-looking commentary and guidance from corporate executives were also positive. More companies increased their earnings forecasts for the rest of the year than reduced forecasts.

Dividends also appear to have recovered. Total dividends paid in 2021 are forecast to come in around 3% below the pre-pandemic peak, and 84% of companies have maintained or increased their distributions over the past 12 months. We'll see if results continue to thrive against more-difficult year-ago comparisons in the back half, as the tailwinds from stimulus and pent-up demand diminish. In the meantime, excellent corporate earnings are helping to keep stocks moving upward.

Not everyone is sharing the wealth

The recovery has not been experienced equally by all portions of the economy. The latest employment report indicated that 3.4 million people have been jobless for 27 weeks or more, representing 40% of the total unemployed population. Some of this is due to extended unemployment benefits, and some of it is structural as people search for new jobs after changing professions or moving to another city. Nonetheless, this shows disparity in recovery rates.

Many small businesses shut down permanently last year, and most of those displaced workers have mismatched skills to the sectors that have thrived in the new economy.

Our economy depends heavily on consumers, and it's going to take time to fully recover. Some sectors will continue to lag, and there might be some speed bumps over the next few years as everyone resets. Don't be shocked if that causes some volatility in the market.