All three are rapidly expanding into their own corners of America's $4 trillion per year healthcare sector.

How can you tell which stocks are poised to provide huge gains? There are lots of correct answers to this question. The most successful investors, though, have something in common: They look for businesses with large available markets and strong advantages over their competition.

All three stocks on this list tick the right boxes. Read on to see what they could do for your portfolio. 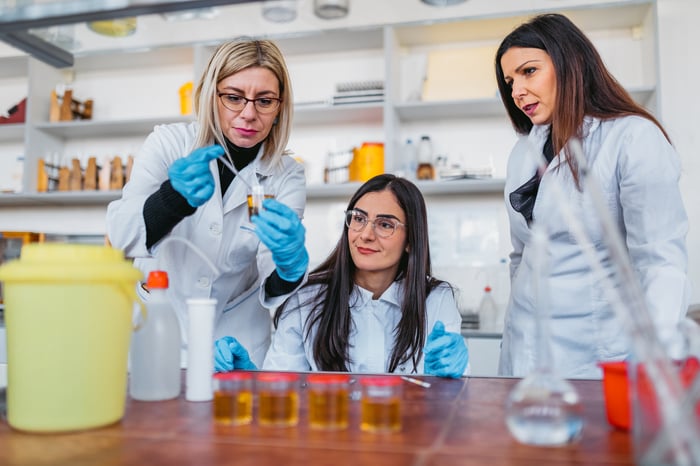 In the U.S., the most effective products for treating hair loss, acne, and anxiety generally aren't available without a prescription. Visiting a licensed professional to obtain one that can be filled by a separate pharmacy is a consumer-unfriendly process that Hims & Hers Health (HIMS 5.45%) has improved a great deal.

By offering a differentiated service that integrates online physician visits with pharmaceutical delivery services, Hims & Hers Health is becoming a leader in this lucrative telehealth niche. In the second quarter, the company reported top-line revenue that soared 69% year over year to an annualized $243 million.

In the U.S., spending on prescription drugs and primary care amounts to around $880 billion annually. That leaves plenty of room for this company to continue growing at a blazing pace.

Exploding demand pushed second-quarter revenue up 150% year over year. The addressable market is worth billions, so Inari's annualized revenue of $254 million is only a small amount of it. The company has only scratched the surface.

Around $2 billion is spent annually treating pulmonary embolisms (PE) that could be addressed with Inari's FlowTriever device. Only around 10% of addressable PE cases are treated with mechanical intervention at the moment. A growing body of clinical data that shows that Inari Medical's devices produce improved outcomes should drive rapid growth for the foreseeable future.

Blood-clot removal isn't the only way healthcare systems are trying to boost efficiency. Keeping bad kidneys from worsening is a lucrative niche that Renalytix (RNLX 7.98%) already has sewn up.

There are an estimated 37 million Americans living with chronic kidney disease, but not all of them need serious intervention now to avoid a case of kidney failure. Renalytix employs a pattern-recognizing algorithm that helps doctors make important decisions that could slow down the progression of this disease. It also lets physicians know which patients need less intervention so they can conserve limited resources.

When it comes to diseases that progress slowly, it takes a lot of time to produce evidence of a benefit. Without any serious competitors on the horizon, Renalytix could grow into this lucrative niche all by itself for years to come.