Gold and silver stocks got clobbered on Thursday as prices of precious metals tanked. Here's how some of the worst performers were faring as of noon EDT.

It looks like just one of those bad days for gold and silver, but here's what you should really make of this drop.

Because precious metals, particularly gold, are considered a safe haven asset against economic uncertainties, their prices are particularly vulnerable to economic data.

On Thursday, the Commerce Department reported a surprising 0.7% growth in retail sales in August versus expectations of a decline, signaling strong consumer sentiment despite rising delta variant coronavirus cases. With the Philadelphia Federal Reserve also reporting strong manufacturing activity and optimism among firms surveyed about the coming six months, the market believes the Federal Reserve could increase interest rates sooner than expected. That boosted the U.S. dollar today and sent gold and silver prices crashing, as their prices and the value of the dollar have an inverse relationship.

The gold spot price cracked more than 2% to near five-week lows while the silver spot price sank 4.5% to multi-month lows, according to Kitco. This triggered a sell-off in gold and silver mining stocks as any drop in metal prices hurts profitability and cash flows. 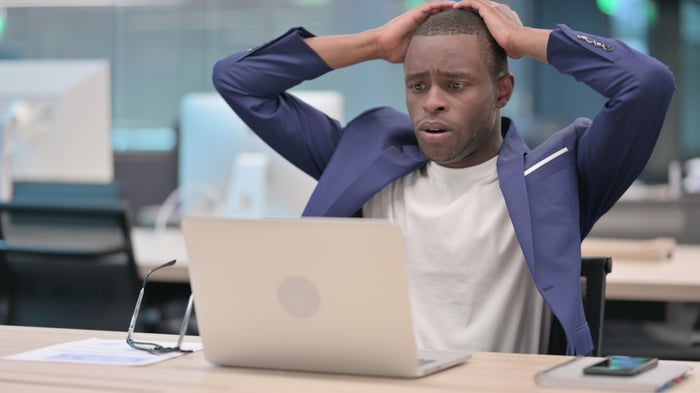 Coeur Mining shares sank the most given the miner's gold and silver mix. Although primarily a gold miner, Coeur derived 25% of sales from silver in 2020 and is spending aggressively on its Silvertip mine in Canada to start commercial production by 2023. Coeur aims to turn free cash flow positive in 2023, but that target looks more achievable in a high gold and silver price environment.

Endeavour Silver and Hecla Mining are pure-play silver mining stocks and were therefore getting knocked out by the slump in silver prices today. Endeavour Silver's all-in sustaining cost has risen steadily in recent quarters, squeezing its margins despite rising silver prices. The miner's prospects don't look too great if silver prices continue to fall.

Hecla Mining, though, has been on strong footing so far this year from an operational performance standpoint. It also pays a dividend, but investors are wary of earning smaller dividends if silver prices fall given Hecla's recently launched variable dividend policy.

Sibanye-Stillwater, on the other hand, is a unique play on gold and platinum group metals. The platinum price also fell today, but it's been falling precipitously for several weeks now largely thanks to the ongoing global semiconductor chip shortage that's clobbered global car production. Platinum group metals are widely used in exhaust control catalytic converters in cars.

Interestingly, though, Sibanye-Stillwater announced a deal today that could pique investor interest: It's buying a 50% stake in a lithium project in Nevada, its third such investment in battery metals. Lithium's use in electric vehicle batteries has made it a red hot metal with potentially explosive growth prospects.

Investing in precious metals isn't for the faint of heart given how volatile metal prices can be. Today was one such nerve-racking day for investors. But if you can stomach the volatility, look beyond short-term gyrations in stock prices, as carefully picked gold and silver stocks, when bought cheap, can prove to be great long-term investments.