These gold stocks are headed for big things, but the market isn't paying much attention yet.

Gold stocks move in tandem with gold prices, but the stocks of several leading gold-mining companies have taken a beating this year, even though their gold production and revenues have risen steadily in recent quarters. As of this writing for example, the largest gold-mining exchange-traded fund (ETF), VanEck Vectors Gold Miners ETF (GDX -0.94%), which owns shares of some of the world's largest gold miners, including Barrick Gold (GOLD -1.29%) and Newmont (NEM -0.86%), is down 19% against gold price's 8.4% drop year to date.

That means top-notch gold stocks are cheap, and although it's hard to predict where gold prices are headed, a pullback in stock markets as feared amid rising coronavirus concerns could give gold prices, and gold stocks, a big leg up. Here are three such compelling stocks to buy now. 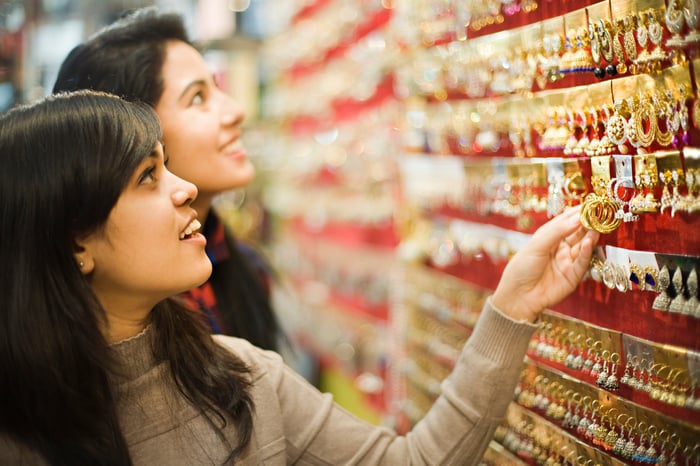 The safest gold stock with a twist

One gold stock that's most unlikely to disappoint you regardless of what gold prices do is Franco-Nevada (FNV -0.04%). Its shares have historically outperformed those of the largest gold miners and are almost always the first to bounce back after a gold-price crash. There's a solid reasoning behind this pattern: Franco-Nevada earns a significantly higher margin, as it's a gold streaming company and so buys gold from mining companies for low prices to sell at spot rates without bearing any mining-related costs and risks. 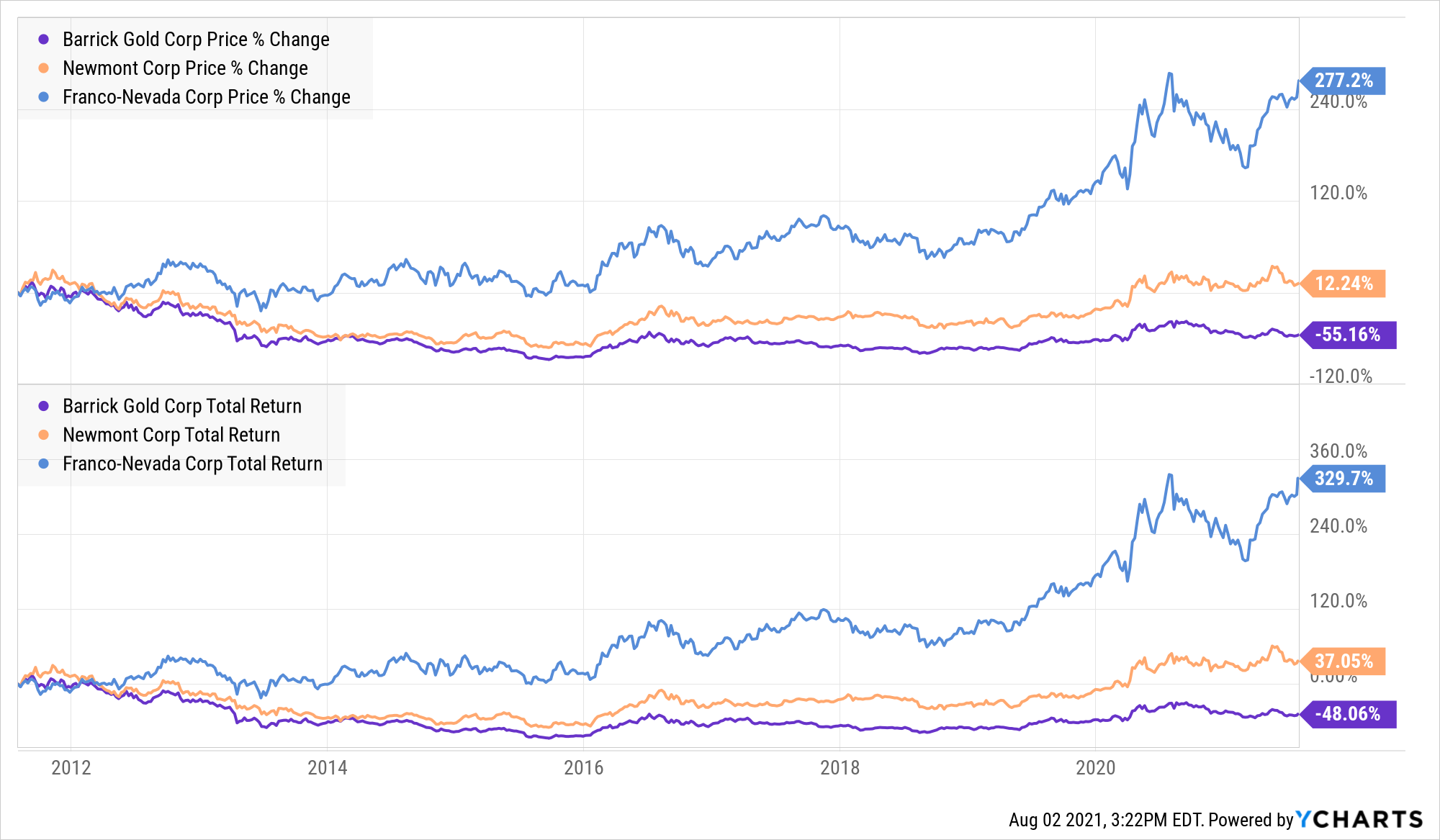 With streams on more than 50 producing and 42 developing mines, Franco-Nevada can grow its sales as these mines expand, without having to spend money. Its largest revenue-generating gold stream mines include:

Its low-cost, asset-light business model with leverage to gold prices also explains why Franco-Nevada has increased its dividend for 14 straight years now.

There's another reason to consider Franco-Nevada: the additional revenue sources it's exploring while remaining primarily a gold company. So after venturing into oil and gas some years ago, Franco-Nevada bought iron ore royalties from U.S. mining giant Vale and Canada-based Labrador Iron Ore this past April. Any rally in oil prices and uptick in infrastructure spending, and therefore demand for iron ore from steel manufacturers, should add to Franco-Nevada's top line.

With those additions, here's what Franco-Nevada's growth forecast now looks like:

Clearly, Franco-Nevada is headed for much bigger things after a record 2020. Chances are, if you check back in a couple of years, you'll think the stock was a steal at today's price.

An incredible gold dividend stock to own

A gold-mining company that can remain free-cash-flow positive even in a low gold-price environment thanks to low costs is a surefire winner in the making. Case in point: Newmont.

In its recently reported second quarter, Newmont's gold production increased 15%year over year, yet its all-in-sustaining cost (AISC) dropped 6% to $1,035 per ounce of gold and free cash flow (FCF) surged 49% year over year. AISC is an all-encompassing, key cost measure used in the gold mining industry and covers everything from production, general, and administrative costs to expenses incurred to explore and sustain production.

Newmont's dividend policy is also among the most generous in the industry: It pays a base annual dividend of $1 per share at a gold price of $1,200 an ounce, and an additional dividend equivalent to 40%-60% of the incremental FCF it generates at prices above $1,200.

So even if gold prices crash by one-third from the current price of around $1,800 per ounce, Newmont could still generate FCF worth $3.5 billion through 2025 and pay a base annual dividend of $1 a share. That's impressive for a gold-mining company. With Newmont stock also offering an industry-leading dividend yield of 3.5% but down nearly 19% in just the past couple of months, it's a compelling buy.

Kirkland Lake Gold (KL) is firing on all cylinders. In late July, Kirkland's net income climbed 67% year over year and hit a record high, and its FCF more than tripled sequentially. Importantly, production rose at all three of its mines, including Fosterville in Australia with limited mine life. In fact, production at Fosterville increased 45% sequentially and could beat management's full-year production guidance of 400,000-425,000 ounces. Kirkland acquired Canada-based Detour Gold last year to offset Fosterville's declining production. Over the next couple of years, Kirkland's gold production should rise gradually as it expands its Detour Lake and Macassa mines. 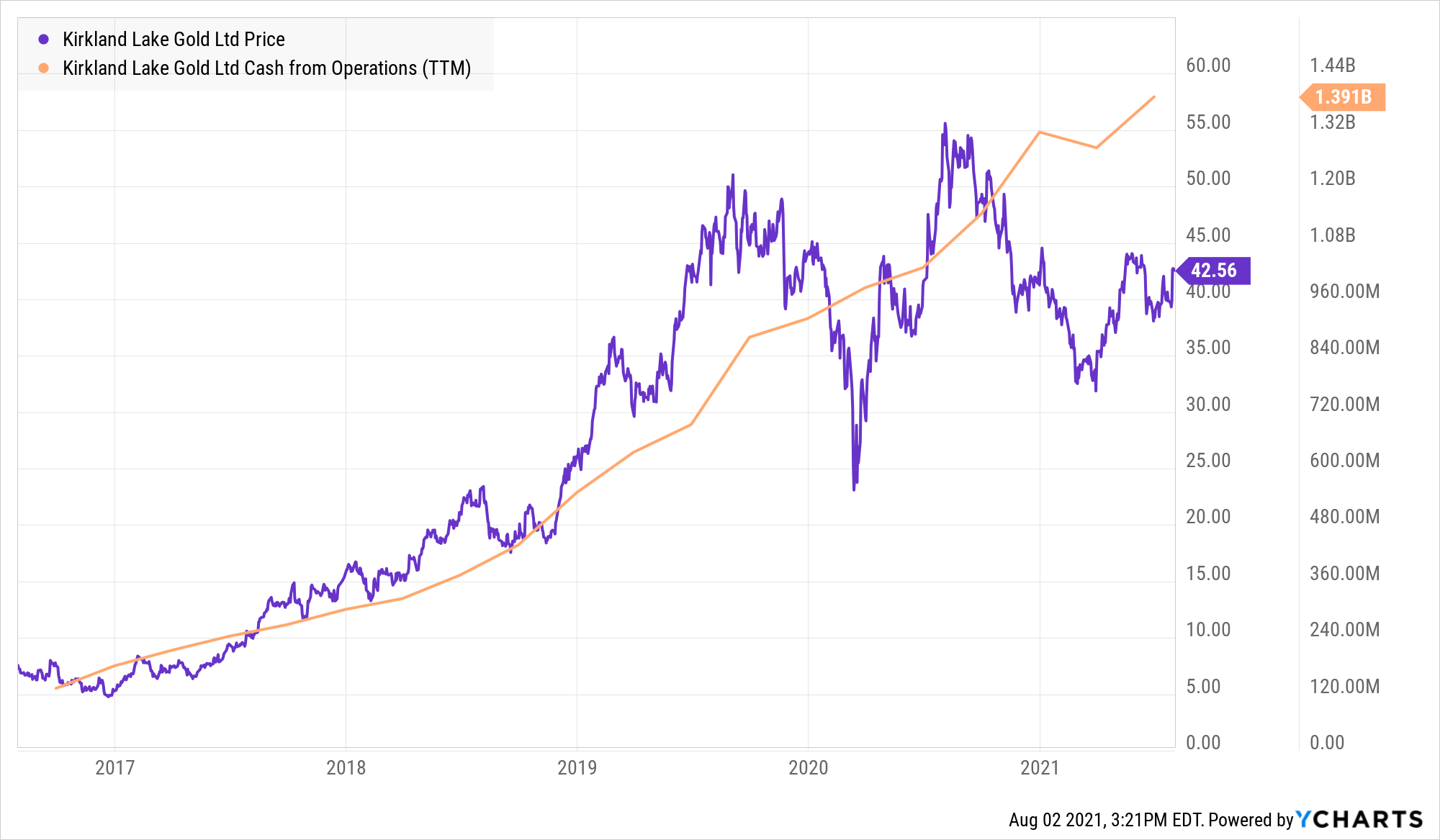 Also, Kirkland's Q2 AISC of only $780 per ounce, and its target AISC for 2021 of $790-$810 per ounce of gold, are among the lowest in the industry. Low AISC is a huge competitive advantage in the old industry.

There's another big reason you'll love Kirkland: It's a debt-free company. That's almost unheard of in a capital-intensive industry like mining. Kirkland's cash flows are also at multiyear highs, but the stock is trading well below its five-year average price-to-cash-flow ratio. That makes this 1.8%-yielding miner a compelling gold stock to buy.