Please ensure Javascript is enabled for purposes of website accessibility
Log In Help Join The Motley Fool
Free Article Join Over 1 Million Premium Members And Get More In-Depth Stock Guidance and Research
By Will Healy – Sep 22, 2021 at 8:43AM

Can the stock for this graphics processing units designer keep moving higher despite its already massive growth?

Nvidia (NVDA -1.51%) stock has become one of the more notable comeback stories of the last decade. It traded at a split-adjusted price of $2.75 per share nine years ago. But moves into artificial intelligence, virtual reality (VR), the Internet of Things, and data centers have made Nvidia one of the more successful chip stocks in recent years.

Now that its price has risen by about 80-fold from its 2012 lows, investors might wonder whether the stock remains a buy. 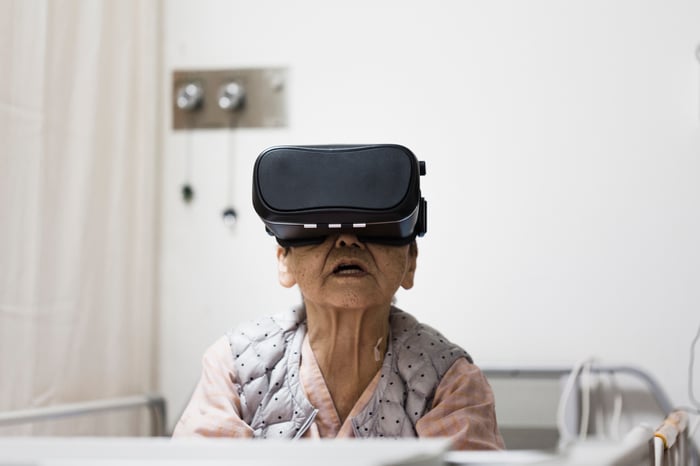 Nvidia has long held a position as a market leader in graphics processing units. This dominance comes after a direct challenge from Advanced Micro Devices (AMD -1.65%) to capture much of this market. Though AMD won contracts to provide GPUs for gaming systems such as Sony's PlayStation and the Microsoft gaming console Xbox, Nvidia still controls about 83% of the discrete desktop GPU market, according to Jon Peddie Research. Also, its gaming revenue increased 85% in the latest quarter versus year-ago levels, keeping it solidly positioned in its traditional specialty area.

Additionally, applying its technology to autonomous cars, VR headsets, cryptocurrency, and other areas has helped boost the stock. Its professional visualization division, which includes VR, experienced a 156% revenue increase in the second quarter over the year-ago quarter, while its automotive division brought in 37% more revenue than one year ago.

Furthermore, it holds potential that could mean it will dominate the data center market by 2030. Graphics workloads have increased the need for GPU chips in data centers. Moreover, thanks to technology acquired with its purchase of Mellanox last year, it has released a data processing unit chip. In the latest quarter, data center revenue climbed 35% from the year-ago period.

Its growth avenues helped revenue for the first two quarters of fiscal 2022 reach $12.2 billion, a 75% increase from the first six months of the previous fiscal year. Since operating expenses grew by only 30% over this period, net income surged 179% to $4.3 billion.

Like many chip companies, Nvidia did not project beyond the next quarter. The third-quarter 2022 revenue forecast of approximately $6.8 billion would amount to an increase of around 44% compared with the same quarter last year, indicating robust but slowing growth.

Such a deceleration could point to short-term headwinds. Nvidia stock has risen by almost 75% over the last 12 months and has also taken its P/E ratio to 75. Not only does that multiple dramatically exceed pre-pandemic highs, but it also takes it far above AMD's 36 P/E ratio and Intel's valuation of 12 times earnings. 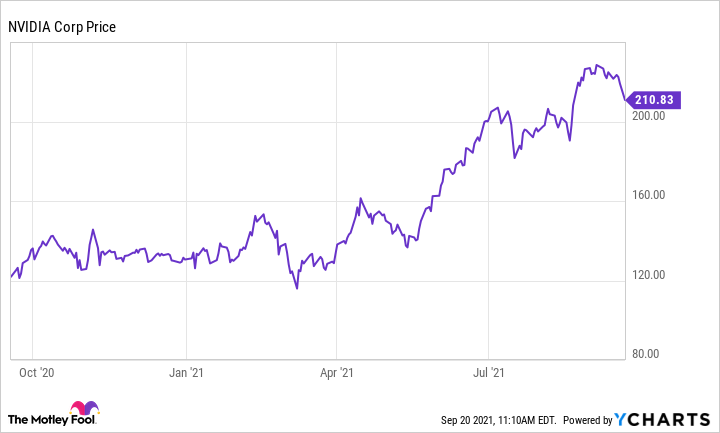 Nvidia has benefited tremendously from taking its gaming applications into new areas of tech. With its rising potential in autonomous vehicles and data centers, it will likely remain an essential chip company for some time to come, an attribute that should keep its stock price rising over time despite the aforementioned 80-fold increase.

But at present, Nvidia faces slowing growth at a time when its valuation far exceeds that of its peers. This could make the stock's near-term direction unclear. While the overall growth story appears intact, investors might want to see how the sales slowdown affects the company before pulling the trigger.