Please ensure Javascript is enabled for purposes of website accessibility
Log In Help Join The Motley Fool
Free Article
Join Nearly 1 Million Premium Members And Get More In-Depth Stock Guidance and Research
By Will Healy – Oct 2, 2021 at 10:10AM

Its latest earnings report brought both earnings gains and uncertainties.

Micron Technology (MU -1.46%) stock dropped in the two following days after it announced its fourth-quarter and full-year 2021 earnings. The memory chipmaker beat estimates, but concerns about capital spending and rising supply prompted investors to unload shares. Although Micron can continue to benefit from the current chip shortage and remain a leading memory chip company longer-term, investors face questions about whether that success will translate into gains for the chip stock. 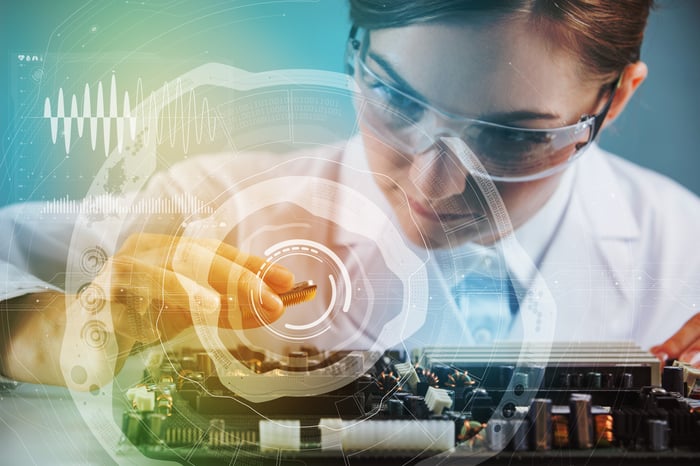 For the fourth quarter of 2021, revenue climbed 36% to almost $8.3 billion. Net income surged 175% higher during that period to over $2.7 billion as the company limited operating expense growth during that time to only 5%. Full-year 2021 revenue of $28 billion rose 29% compared with 2020. This solid revenue growth allowed net income to expand by 116% during that period to $5.9 billion, as operating expense increases remained minimal throughout the year.

While Micron did not project beyond the first quarter of 2022, the company expects between $7.45 billion and $7.85 billion in revenue. Hitting the midpoint of this range would amount to a 33% year-over-year increase.

However, both that projection and the report on earlier quarters hint at a critical concern. The fact that the company only projected one quarter into the future could indicate that the company may struggle to match the numbers beyond Q1.

Why the numbers should concern investors

This worry points to moves by Micron and its peers that should eventually end the chip shortage. Amid the current shortfall, chipmakers all over the world, including Micron, have begun expanding capacity. As a result, Micron expects to spend between $11 billion and $12 billion on capital expenditures in fiscal 2022 on research and increasing production, well above the $9.7 billion allocated in 2021.

Moreover, one of its biggest competitors, Samsung, has pledged to spend $146 billion on product development and foundry expansion over the next three years, according to SDxCentral.

While Micron and its peers will likely not struggle to sell more memory chips, the production capacity expansion highlights the adverse effects on shareholders as Micron stock cools off. Micron's share price depends more heavily on chip pricing than a semiconductor stock such as Nvidia or Intel.

Due to higher demand for chips stemming from artificial intelligence, virtual reality, and the Internet of Things, the 2018 price drop did not affect Micron stock as severely. Instead of falling below $10 per share as it did in previous price cycles, the 2018 low came in at approximately $28 per share. Still, this was a 56% drop from its 2018 high of around $65 per share. An equivalent drop from the 2021 high of $97 per share would take Micron to approximately $43 per share, well below the $70 per share price as of the time of this writing. The sharp swings in memory prices over time make Micron a deeply cyclical stock.

Micron stock has prospered amid the memory chip shortage that arose amid the COVID-19 pandemic. However, with companies all across the chip industry increasing capacity, supply will likely rise, causing chip prices to fall. The history of Micron stock points to significant selling when such a phenomenon occurs. Thus, while Micron should remain a leading provider of memory chips, investors may have to brace for more near-term declines and reduced long-term gains.