Please ensure Javascript is enabled for purposes of website accessibility
Log In Help Join The Motley Fool
Free Article Join Over 1 Million Premium Members And Get More In-Depth Stock Guidance and Research
By Parkev Tatevosian, CFA – Oct 2, 2021 at 9:37AM

The stock benefited from the stay-at-home trend at the pandemic's onset and is maintaining that momentum.

Netflix (NFLX -2.04%) stock made another record high today, closing at $610 on Sept. 30. The company continues to sustain the momentum gained at the pandemic's onset when millions of people turned to Netflix to make the time cooped up at home more enjoyable.

Investors were concerned that Netflix could shed some subscribers as economies reopened because people now have more options for spending their time and money on entertainment. That has not been the case thus far. Let's look at some causes for Netflix's stock rise to record highs, and whether it can continue or if it's due for a pullback. 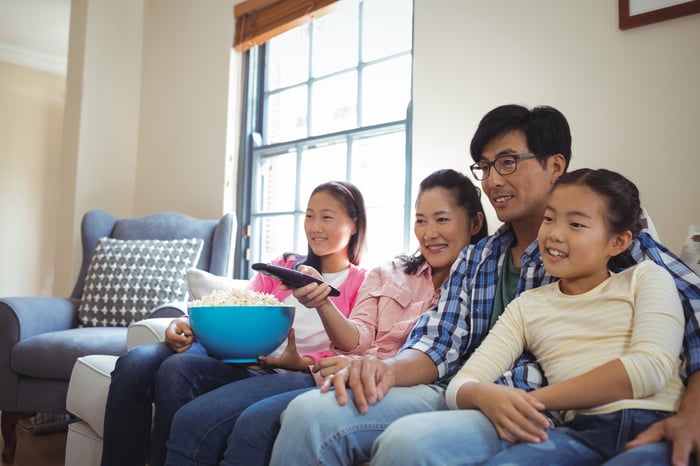 Netflix is benefiting from the shift to streaming

Interestingly, Netflix is forecasting 3.5 million subscriber additions in its fiscal third quarter. If it hits that target, Netflix will have added a total of 54 million subscribers in the last 24 months. Overall, the company boasts 209 million members that pay to stream movies and shows to their TVs and mobile devices worldwide.

The impressive subscriber growth is leading to impressive revenue growth. Indeed, from 2016 to 2020, revenue almost tripled, growing from $8.8 billion to $25 billion. In addition to providing quality service that attracts viewers, Netflix is the beneficiary or arguably the cause of a shift away from linear TV to streaming content.

After all, signing up to Netflix is more convenient than a traditional cable subscription. The cable option comes with long-term contracts, a complex installation that requires a professional, and a higher price. In contrast, you can sign up for Netflix and start watching content in minutes, and for less than $1 per day. It's no surprise then that consumers are flocking to the service by the millions.

Still, there is a long runway for this growth to continue as Netflix currently consumes less overall attention from viewers than linear TV.

Moreover, Netflix is managing its growth efficiently. The company is not spending on content with reckless abandon. Management looks at how much revenue will come in for a given quarter or year and plans content spending based on that revenue total, making sure to leave room for steady operating profit expansion. Since January 2016, management has committed to a goal of increasing operating profit margin by 300 basis points per year, and so far, it is hitting the target (see chart). 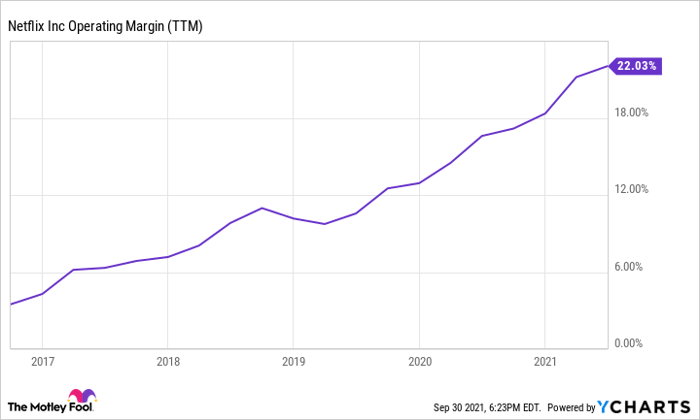 That means even though Netflix stock is at record highs, it's trading for a price-to-earnings ratio (63) near the cheapest level in the last decade. To answer my question, Netflix is not expensive, and given its solid prospects, it can continue going even higher.

Prediction: Ads Could Make Disney and Netflix Investors a Ton of Money
360%