Consumer savings are dwindling, and that could cause people to favor more budget-friendly entertainment options.

In response to the coronavirus pandemic, the federal government initiated several rounds of fiscal stimulus to support the U.S. economy and help people through the crisis. Some programs featured one-time checks of up to $1,200 per adult, enhanced $600 per week unemployment benefits, pausing student loan payments and interest accumulation, and several more.

The effect on the economy was a boost in consumer savings and an increase in purchasing power. As a result, many people had more money than usual, while some of their monthly expenses, like student loans, were paused, allowing them to spend more on discretionary items. That being said, the effects of that fiscal stimulus are starting to fade. Therefore, consumers may now have less money to spend on non-essentials. Here's why that might be a good thing for Netflix (NFLX 1.09%) stock. 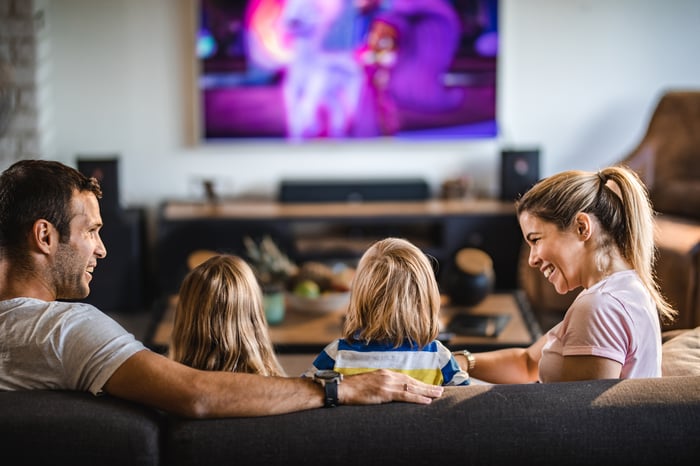 Millions of unemployed Americans initially received an extra $600 per week on top of their usual unemployment benefits. Shortly after that program ended, a new one went into effect, giving the unemployed an extra $300 per week. Those enhanced benefits will end on Sep. 6, reducing the income of an estimated 7.5 million people.

Additionally, the Department of Education said that its pause on student loan repayments would end in January. The halt has been freeing up money for many people to spend elsewhere.

At this point, people have spent much or all of the stimulus they received. Each time one of those payments was distributed, you could see a rise in the personal savings rate. The figure jumped to 33.8% in April 2020 after the first round of payments. The government sent out the last round of payments in March of this year. But by July, the personal savings rate was down to 9.6% -- a figure barely above the rate from before the outbreak.

How does that benefit Netflix?

The prices of Netflix subscriptions range from $8.99 per month to $17.99 per month. That's 30 days of entertainment for a whole family for less than $1 per day. Granted, it may not be as fun as going out to a movie theater, visiting a theme park, or taking in a ball game. However, it's also a tiny fraction of the cost of the aforementioned.

For a family of four, watching a movie in a theater could cost nearly $100 for a few hours of entertainment. For the same family, visiting a theme park could be a multiple of that. However, when folks are flush with cash, they are more likely to choose more expensive options, which means they may be less likely to subscribe to Netflix or more likely to cancel their existing subscriptions.

With many people likely to have somewhat less disposable cash on hand, we can expect consumers to choose more budget-friendly entertainment options -- like Netflix. That trend, plus the fact that Netflix is trading at a price-to-earnings ratio of 61, its lowest valuation by that metric since 2015, makes this an opportune time to consider adding Netflix stock to your portfolio.