The streaming pioneer is improving profit margins by adding millions of subscribers.

Streaming content pioneer Netflix (NFLX -2.44%) is in a great position to thrive as more of the world chooses to stream their content instead of watching over linear TV. The company is gaining millions of new subscribers during the pandemic, and the scale is improving profit margins and cash flows.

The downside for investors is that Netflix's success is no secret to the market. The stock is performing well, rising 102% over the past two years and over 500% in five years. That said, during a stock market crash, Netflix's stock may come down along with the broader market, allowing investors to buy this excellent performer at a lower entry point. 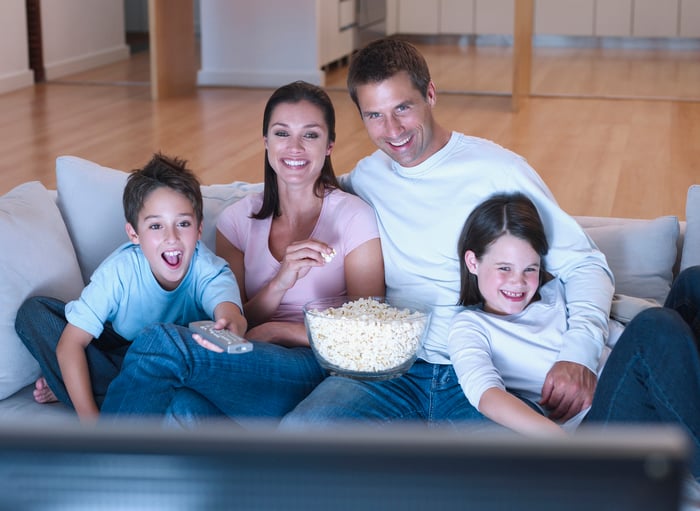 Netflix boasts 209 million paying subscribers worldwide, including 74 million in the U.S and Canada. While it may feel like Netflix has been around forever and has saturated the market for its services, there is plenty of room for growth. In the U.S. in particular, streaming made up just 27% of total viewing time compared with 63% for linear TV, according to Nielsen.

As Netflix continues building out its content library, getting to know its viewers better, and customizing experiences to suit their needs better, the company can take a more significant share of viewing hours. That should lead to more pricing power and the ability to raise monthly fees without losing subscribers.

For now, results are already quite impressive. In its fiscal second quarter, Netflix's 209 million viewers generated $7.3 billion in revenue. Annualized, that would amount to $29 billion, giving Netflix a robust content budget, which will help attract new subscribers and retain existing ones.

The company's growing scale is also improving profit margins. Indeed, in the most recent quarter, Netflix's operating profit margin was 25.2%, 310 basis points higher than the 22.1% it earned in the same quarter last year. Management feels these results are sufficient enough to sustain the company without tapping into capital markets for cash.

Another exciting development for Netflix during 2020 and 2021: It reduced the market's perception of competitive risk. Several streaming competitors entered the space during that time, but it did not harm Netflix. Most notably, Disney's flagship service Disney+ attracted 116 million subscribers from November 2019 to July 2021 without taking them away from Netflix.

That raises credence to the argument that streaming competitors don't hurt Netflix, and they may even be helping the streaming category as a whole. As more services enter the market, canceling linear TV services and switching to streaming is a more compelling proposition for customers. The overall costs are likely to be lower for them, and they have better control over the selection of content.

A market crash could present an opportunity

Netflix is trading at a price-to-earnings ratio of 61, the lowest it has sold for going back to 2015. On that basis, Netflix stock is inexpensive right now. However, a stock market crash could take Netflix stock down along with it -- and such a drop could allow investors to buy it at an even more favorable entry point.