After 2020 led to more streaming service signups than ever before, many competitors in the streaming wars are focused just as much on subscriber retention as they are on gaining new subscribers. Indeed, subscriber churn can make or break quarterly net subscriber addition numbers for an established service like Netflix (NASDAQ:NFLX), Amazon (NASDAQ:AMZN) Prime, Walt Disney's (NYSE:DIS) Disney+ and Hulu, or AT&T's (NYSE:T) HBO Max.

In June, I wrote that the current streaming leaders hold an advantage when it comes to keeping subscriber churn low. New numbers from Leichtman Research Group confirm the big three streaming services -- Netflix, Prime, and Hulu -- have considerably lower churn rates than the competition. 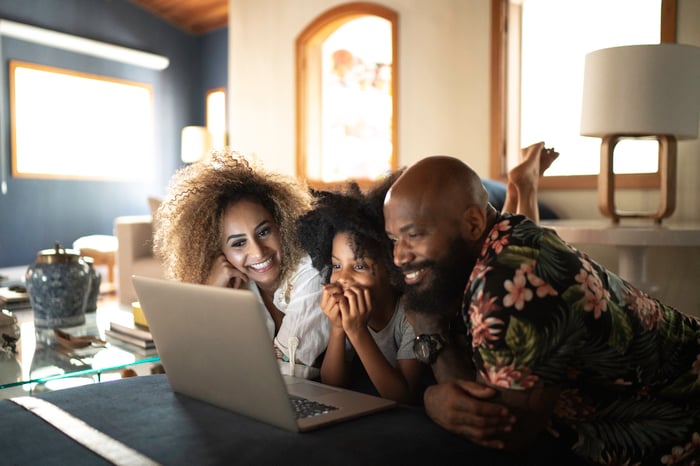 How the big three compare

In its annual study of streaming services, researchers asked about which services consumers subscribed to in the past year, but don't any longer. In a correspondence with FierceVideo, Leichtman said the percentage of subscribers that've canceled Netflix, Amazon Prime, or Hulu over the past year were 4%, 5%, and 6%, respectively. By comparison, the percentage of subscribers planning to cancel a subscription to a smaller competitor over the next six months ranges from 9% to 19%.

Given the relative size of Netflix, Amazon, and Hulu, though, a smaller percentage can still amount to a substantial number of subscribers in absolute terms. But there are plenty of new subscribers entering the market and the big three have been doing a good job of winning them over.

Total U.S. streaming subscriptions could grow 20% to 277 million by 2026, according to researchers at Parks Associates. And many subscribers are more than willing to subscribe to multiple streaming services. Seventy-four percent of all subscribers to the big three are subscribed to more than one of them, according to Leichtman. That's an increase from 70% in 2020 and 47% in 2016. Moreover, 53% of U.S. households have three or more streaming services in general.

In the last year, Netflix managed over 1 million net additions in the U.S. and Canada. Hulu added over 7 million subscribers, helped by the popularity of the Disney bundle. Amazon doesn't report exact figures, but global Prime membership growth accelerated in 2020.

HBO Max managed to add nearly 11 million domestic subscribers in the first year of its launch. It's still unclear how it'll manage to hold onto subscribers in its second year, especially as its day-and-date Warner Bros. film release plans expire.

Netflix uses sheer volume to keep subscribers engaged. It releases hundreds of original series, films, and comedy specials every year; appeals to an extremely broad demographic; and typically spaces out its releases throughout the year. (2021 is backloaded with content due to COVID-19-related production delays.) With something new to watch every week, subscribers aren't likely to cancel.

Netflix's strategy also has the benefit of drawing in new subscribers and bringing back old ones when it scores a hit with a new series. The No. 1 reason consumers sign up for a streaming service is to watch an exclusive series.

Amazon leans on its Prime membership, which comes with big benefits for Amazon shoppers, including unlimited two-day shipping and increased rewards on its credit card. That said, Amazon has been investing heavily in more content for the video service, including the planned acquisition of MGM Studios.

Hulu has benefited from Disney's bundling strategy, which combines Hulu, Disney+, and ESPN+. Bundling lowers churn when done well, and based on the growing percentage of Hulu subscribers with the bundle, it's working. Hulu, likewise, has been adding a lot of content, including originals and "FX on Hulu" content.

These are advantages other competitors in the industry can't copy. Nobody's going to outspend Netflix on original content. Nobody has a whole bevy of other benefits attached to their video subscription like Amazon. And nobody has Disney's branding, marketing, and portfolio of complementary video services. HBO Max is closest to the competition, and it could get a boost if the Discovery merger with WarnerMedia closes. The smaller competitors that have popped up over the last couple of years, however, don't have a chance at catching the streaming leaders.