Companies touting successful treatment candidates to fight COVID-19 are in the healthcare spotlight, gaining the attention of investors. Investigational treatments are being developed at a rapid pace by numerous companies of all sizes. This includes biotech companies such as iBio (IBIO -8.01%), an innovator specializing in the manufacturing and production of antibodies and vaccines under development.

iBio's stock price spiked in July of last year following its inclusion in the Russell 2000 and Russell 3000 indexes. But shortly thereafter, investor confidence waned due to a lack of news from its COVID vaccine candidates, leading to a 75% decline in the biotech stock.

Now, a brief renewed interest from investors is the result of exclusive licensing deals and positive pre-clinical studies involving its most promising candidates. Could this be a sign of growth to come? 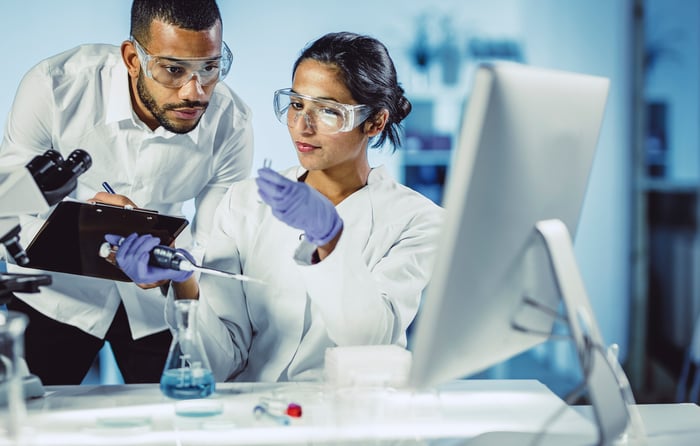 Candidates worth supporting to find an effective treatment

iBio has four candidates in its current pipeline, three of which focus on human diseases. It's also developing a vaccine to treat animals for swine fever.

All three of the human health candidates have reached the pre-clinical phase of development, while the vaccine for treating animals has progressed a bit further into clinical development. Among the candidates showing the most promise is what the company has labeled IBIO-202. It's intended to fight the variant strains of the coronavirus by focusing on the neoclapsid (N) protein, which is known to produce a high immune response rate.

In July, iBio posted results of pre-clinical studies involving IBIO-202, showing that the focus on the N protein can help produce T cells that help the body fight the virus. The study results support the idea that current vaccines focused on the spike (S) protein can be effective but might wane over time, leading to the requirement for boosters. By focusing on the N protein in combination with the S protein, the vaccine could be more effective and longer-lasting.

Kristen Kluska of Cantor Fitzgerald noted, "We believe that the company's approach is sound and could potentially support the ongoing global vaccination effort." Cantor currently has a $3 price target on the stock, reflecting an upside potential of more than 170%.

A second candidate in the pipeline that the company is excited about is RTX-003 (renamed as IBIO-101), an antibody developed by RubrYc Therapeutics that targets regulatory T cells (Tregs) used for immunotherapy treatment for cancer. In pre-clinical studies, it showed signs of generating strong anti-tumor responses as both a monotherapy, and in combination with checkpoint inhibitors.

iBio expects to initiate an investigational new drug study within the next 10 months, with CEO Tom Isett saying that the collaboration with RubrYc is a "pivotal milestone for iBio that can create value in multiple ways." The company intends to use its proprietary plant-based FastPharming protein expression system, combined with the artificial intelligence platform of RubrYc, to produce additional cancer therapeutic candidates that are safe and scalable, and at industry-leading speeds.

The FastPharming system is designed for rapid scaling-up of vaccines and therapeutics and works by creating a targeted protein through the leaves of iBio's proprietary plants. As the plants grow, so do the leaves, which are then harvested, and the proteins are separated, cleaned, and formed into a final product. By using plants as the bioreactors, instead of stainless-steel or single-use bioreactors, the system better complies with green initiatives, and the company maintains that the production method shaves months off standard processing times.

In late August, iBio shelled out $5 million to sign a worldwide exclusive licensing agreement with RubrYc, which will allow it to further the development and commercialization of IBIO-101, as well as to have the option to four new molecules developed with RubrYc's artificial intelligence platform. An additional $2.5 million will be paid to RubrYc in December. As part of the deal, iBio also obtained an equity stake in the privately-held company.

This agreement follows an exclusive licensing deal signed with Planet Biotechnology last year, giving iBio rights to Planet's therapeutic candidate ACE2-Fc. That's the foundational candidate iBio is using as part of its current pipeline to develop treatments for the SARS-CoV-2 virus in its efforts to fight COVID variants.

The intrigue of investing early in an under-the-radar biopharma is enticing. But with the early stages of a therapeutic pipeline comes the risk of lower revenue, higher expenses, and reliance on non-financial news to spike interest.

In the quarter ended June 30, all of these characteristics were visible. Revenue for the quarter decreased by over 50% from the same period last year, and it also showed a decrease of 37% compared to the previous quarter.

Expenses also increased. Research and development costs soared 177% to $10 million for the full fiscal year, driven by higher expenses to support its pipeline and platform technology. Selling, general, and administrative expenses also jumped during the quarter, doubling from the same period a year ago.

The company expects these expenses to continue growing into 2022, but slower than 2021. Meanwhile, losses continue to pile up at over $23 million for the fiscal year, an increase of 41% over 2020. The company does have $97 million in available cash and cash equivalents but has noted that the current cash position would run out in the first calendar quarter of 2023.

For the bargain-hunting investor who doesn't mind taking on some risk, a $1 stock in a company building a pipeline to treat infectious and fatal diseases could be a big winner in five to 10 years. It could also be nonexistent if cash runs out. For those looking for more solid ground, there are probably better options out there.