Please ensure Javascript is enabled for purposes of website accessibility
Free Article Join Over 1 Million Premium Members And Get More In-Depth Stock Guidance and Research
By Alex Carchidi - Jan 1, 2021 at 7:04AM

Innovation paid off big for investors.

If you're like me, you're an eternal optimist when it comes to the march of scientific progress and its ability to improve human life. Making new technologies, foods, and medicines is never easy, but it still pays off time and time again for investors and members of the public alike. If you want to get rich off of advancements in science, however, you'll need to know which innovative companies are the most promising -- preferably long before everyone else realizes the same thing.

The stocks that I'll discuss today are micro-cap stocks, which means that they have market capitalizations between $50 million and $300 million. Think of them as early stage public companies that don't have much consistent revenue yet. Their products or methods might be unproven, but their businesses tend to have a lot of room to grow. So, while you shouldn't allocate 100% of your portfolio to micro-cap stocks, they can be great for long-term investing. 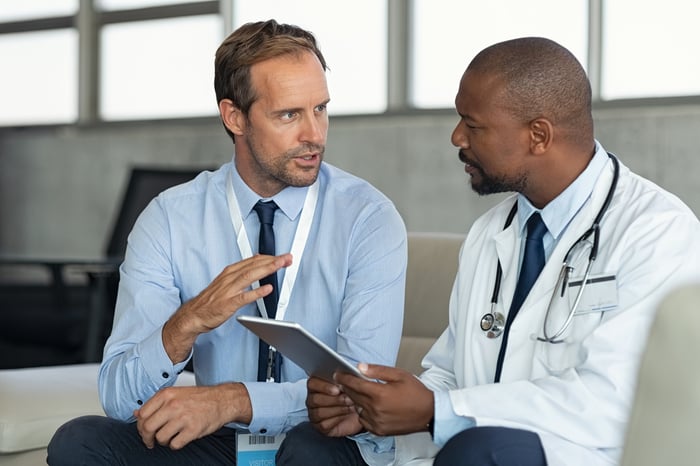 iBio ( IBIO 0.04% ) expanded by more than 349% this year after initiating two coronavirus vaccine programs, both of which are still in preclinical development. Nonetheless, this pair of projects is likely what put the stock on the map for investors, and preliminary data reports in August show that one of the candidates appears to be effective. But there's a long road ahead before the company could see any revenue, as the clinical trials are just beginning.

Aside from its development pipeline, iBio also performs contract manufacturing and development for other small biotech companies. While these activities don't make it profitable, they do partially subsidize the development of intellectual property (IP) pertaining to drug manufacturing. Time will tell whether its IP will pay off enough to be sustainable. In the meantime, be on the lookout for announcements of major new development partners or news about its coronavirus vaccine projects.

Most investors probably haven't heard of AquaBounty Technologies ( AQB 2.97% ), even though its stock more than tripled in 2020. In a nutshell, AquaBounty develops and raises genetically engineered salmon that eat less feedstock and yield more when harvested. So, when the company announced that its very first batch of super-salmon would be harvested before the end of the year, its stock popped in anticipation. In fact, while it spent most of the year as a micro-cap, AquaBounty has grown enough since the end of September to earn the small-cap label.

Currently, its salmon product is the only genetically engineered animal protein that's approved by regulators for human consumption in the U.S. and Canada. Over the next few years, AquaBounty plans to build new farming facilities in North America while advancing through the regulatory approval process in a handful of international markets. This means that its revenue growth is likely on the verge of accelerating and delivering the company with its first consistent earnings. Investors should take note: The company is shaping up to be a leader in the food market of the future. 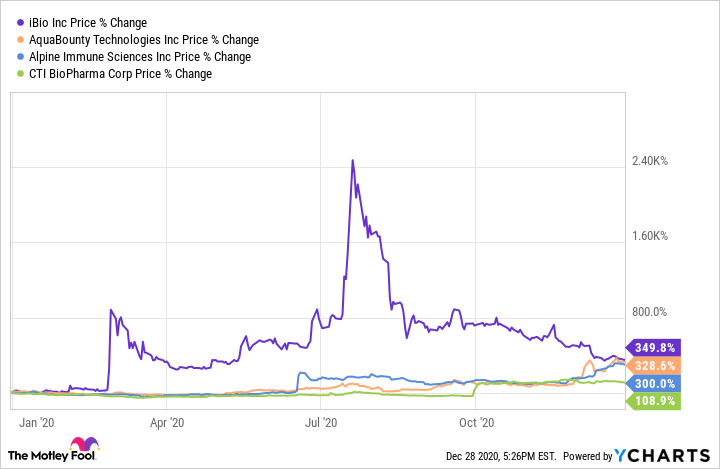 Alpine Immune Sciences ( ALPN 5.60% ) tripled in value this year with a new collaboration worth up to $805 million with AbbVie to develop its ALPN-101 anti-inflammatory drug. When the deal was announced in June, Alpine's stock skyrocketed. According to the latest earnings report, the collaboration should yield enough cash to continue developing its lead pipeline programs through 2024.

Importantly, this means that the company will be able to move forward on its wholly owned phase 1 ALPN-202 project for advanced malignancies. While the AbbVie deal is a big break in the short term, Alpine's long-term growth potential rests in its internally developed projects. So keep an eye on ALPN-202 to see whether the clinical data is living up to the company's hopes.

CTI BioPharma ( CTIC 3.73% ) more than doubled its value in 2020 with growth of 108.9%, driven by its PRE-VENT therapy for severe COVID-19. Because the company moved fast to meet the pandemic-induced demand for life-saving drugs, PRE-VENT is already in phase 3 of its clinical trials. Look for an interim update from this program in early 2021, and expect CTI's stock to move up or down in line with the results.

Aside from PRE-VENT, CTI also has several other programs that aim to treat myelofibrosis. At least one of these programs could be approved in 2021, which would give the company recurring revenue for the first time and catalyze further stock growth. But be aware that all of CTI's eggs are in one basket. All of its pipeline projects are based around its antibody pacritinib, so unexpected setbacks with its safety characteristics or manufacturing process could be particularly damaging.