This five-pack is a great starting point for your research.

We are fortunate to be investors during this "digital age," where technology makes it possible for businesses to grow faster than ever. Investors can build long-term wealth by buying and holding high-quality, rapidly growing stocks.

If you are looking for a starting point to discovering these companies, consider the five names below. They are among the fastest-growing large-cap growth stocks you can find.

The worldwide e-commerce market reports sales could hit nearly $5 trillion in 2021. The migration of commerce from brick-and-mortar stores to the internet remains one of the most important growth stories of this era. Internet company Sea Limited (SE 0.02%) has emerged as the e-commerce leader in Southeast Asia while expanding into new markets such as Latin America, India, and Europe. 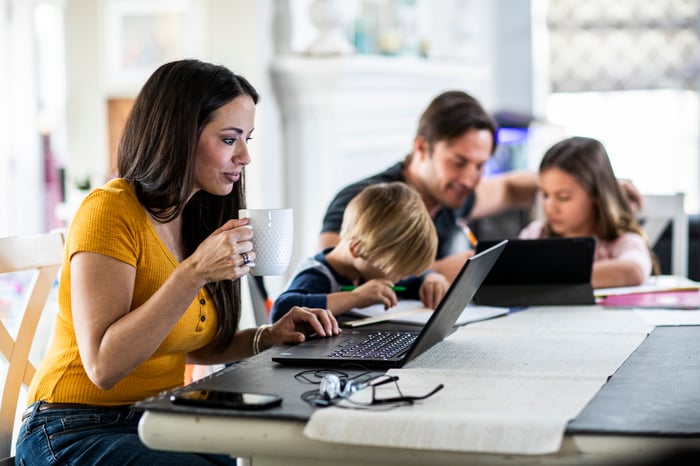 The company does more than e-commerce, tying successful gaming and digital payments businesses into its customer base. Sea Limited's Garena division owns FreeFire, the world's most popular mobile game.

Sea Limited has reported its 2021 second quarter, where revenue came in at $2.3 billion, a 159% increase year over year. An important thing to note is that the company, although reporting a net loss for the period, is seeing an increase in its number of active and quarterly paying users. It's just getting started in its new markets, so growth could easily continue to be rampant in the years ahead, forging a pathway to profitability.

Advertising has remained a basic part of selling to consumers for centuries and is likely to continue that way. In 2020, advertisers spent more than $65 billion in North America alone to get their product in front of your eyes. Roku (ROKU -9.29%) is a streaming platform that acts as an operating system for your TV, enabling viewers to access content and streaming services like Netflix.

More than 55 million streamers are now using Roku's streaming sticks, or Roku branded TVs, which gives the company a large audience to advertise to. "Cutting the cord" has been increasingly popular among viewers for years, and the gradual shift of advertising dollars from broadcast TV to streaming ads is underway as a result.

Roku is known as a streaming company but continues to make more of its profits by selling ads to brands that want access to Roku's users. The company's revenue grew 81% year over year in Q2 2021, led by a 117% increase in "platform revenue," which houses Roku's ad business. Industrywide ad spending on connected TVs, such as Roku's platform, was up 25% in 2020, signaling that this trend has plenty of momentum.

Large companies like Amazon (AMZN -3.27%) dominated e-commerce in the early days. But today, anyone can participate in the digital retail economy, thanks to Shopify (SHOP -5.08%), whose platform gives merchants, both big and small, the ability to set up and operate an online store.

Shopify has become an e-commerce titan, amassing a whopping 1.7 million merchant base across 175 countries. In the United States, Shopify is second only to Amazon in e-commerce market share (with an 8.6% share, nearly double the third company) and recently surpassed Amazon in web traffic due to the collective sum of its many merchants. This shows the company may be able to give Amazon a fight for more of the market.

The pandemic helped Shopify grow revenue 86% in 2020 over 2019, and that momentum has continued into this year. In its most recent quarter, Q2 2021, revenue grew 57% over the previous year. In addition, the company has drawn in net income of $2 billion for the first six months of this year.

Cybersecurity is poised to be a massive area of concern for companies moving forward. Every year, high-profile data breaches happen, costing companies money and damaging their brands. CrowdStrike Holdings (CRWD -4.39%) is a cloud-based cybersecurity platform that analyzes threats in real-time on its Falcon Platform, which links all of its customers together on a network.

Cloud-based security can update in real-time versus traditional antivirus software installed locally on a computer that requires periodic updates to recognize new threats, leaving it vulnerable to new or unknown viruses.

CrowdStrike's services have become popular with its corporate customers. Revenue grew 70% year over year in fiscal Q2 2022 (the company has a Jan. 31 fiscal year-end), driven by adding more than 1,600 new customers in the quarter, and CrowdStrike's 125% net revenue retention rate. This means that its customers are spending 25% more after they become customers. With cybersecurity's frequent changes, investors can expect the company to maintain strong growth in the future.

E-commerce shows up again on this list, but it's essential to emphasize the size of the opportunity. Especially in emerging markets like Latin America, where it's estimated to grow 37% in 2021, making it the world's fastest-growing e-commerce market this year.

MercadoLibre (MELI -2.13%) is the leading e-commerce platform in Latin America, housing a marketplace business, as well as the logistics and digital payment businesses to support it. Like Amazon, MercardoLibre has spent the past twenty years vertically integrating, working to capture how an order is placed, paid for, and fulfilled by its customers.

The company's revenue grew 103% year over year in Q2 2021, despite coming off a pandemic tailwind in 2020. Unlike other, more developed areas of the world, consumers in Latin America are heavily underbanked (nearly 70% of the population.) Latin America is still maturing as a digital economy, so the growth runway could remain massive for MercadoLibre.

UiPath Is Decreasing Losses on the Bottom Line: Does That Make UiPath Stock a Buy?