If you're looking for long-term winning tech stocks to diversify your portfolio, start here.

The world we live in is more digital than ever. Technology is evolving, and traditionally non-technical industries are being infiltrated by innovation as time goes by. High-quality technology stocks can provide robust investment returns over the long term. 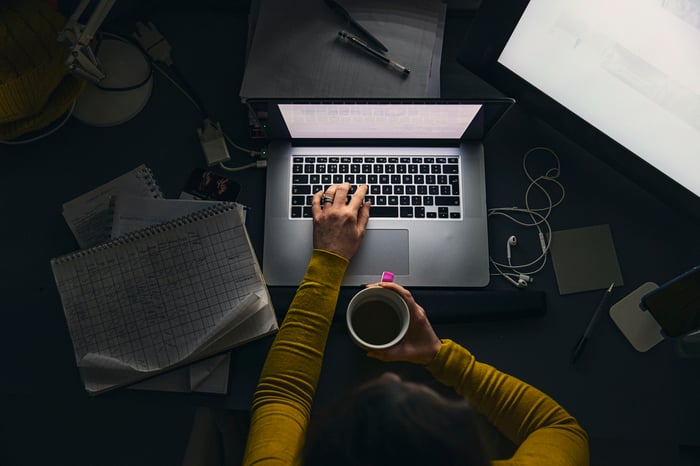 Digital banking is a real threat to the traditional banking industry because of its lower costs to acquire users, and fintech company Square (SQ 3.25%) is among those leading the charge. The company is growing its Cash App, which enables users to store and send money. Now with 40 million monthly users, Cash App has a long growth runway ahead of it. Square is seeking to complement its business with new features over time, such as Buy Now and Pay Later via Afterpay.

The Afterpay acquisition will give it access to 16 million consumers located both inside and outside of the United States. It could give the company momentum for expansion of Cash App in new markets, especially those where consumers are underbanked, like in emerging markets. Square reported net income of $574 million for Q2 2021 which was an increase of 89% year over year. In addition, the company has experienced revenue growth of 188% over the past three years. With more opportunities to expand on the horizon, this stock could be a great place for tech investors to look.

Tesla's (TSLA 11.00%) Model S pioneered the electric vehicle industry a decade ago. It's continuing to ramp up its deliveries years later, and Tesla could continue to grow through its other ventures, including solar energy and autonomous driving. The electric car market is growing more than 20% per year and the market is expected to grow at a compound annual growth rate of 34% by 2027. So Tesla's leadership (79% market share in the U.S.) in the category could translate to ongoing growth over the coming years.

Tesla's revenue has grown 50% per year on average over the past five years, and the business is thriving. The Cybertruck hasn't yet entered production, and its presence could further disrupt legacy automakers, especially domestic competitors who rely on pickup trucks as their most profitable models. As the company reported net income of $1 billion for the second quarter which was nearly a 1,000% gain over last year, investors have plenty to look forward to.

Young investors might have a hard time believing that there was no such thing as streaming just over a decade ago. Netflix (NFLX -1.12%) transitioned from mail-order DVDs to streaming content in 2007, and the rest is history. Today, Netflix makes much of its own content and is expanding outside of the United States, while getting into gaming, which could continue to drive its growth moving forward.

The company has spent years investing to build its own content, no longer relying on third-party partners to license it. Netflix has begun to generate robust operating cash flow, $713 million over the first six months of this year, despite investing a whopping $7 billion in new content. This high rate of investment creates a competitive moat that few others can afford to spend to compete with. Since Netflix has reported net income growth of 128% and revenue growth of 58% over the past three years, the company's content investment seems worthwhile.

Social media is now one of the primary ways people interact, maintain relationships, and make friends. Facebook (META 3.01%) not only owns its namesake social media platform but other leading networks such as Instagram and messaging app WhatsApp. Altogether, more than 2.8 billion people use a Facebook product each month. That massive number of users creates substantial revenue streams for the company through advertising. Over the past five years, the company has reported revenue growth of 211% and net income growth of 185%, showing the billions of users have translated into serious cash.

Facebook's long-term frontier has become the metaverse, which Mark Zuckerberg has personally stressed the importance of to the company's future. The company already owns virtual reality hardware company Oculus and is dedicating a full staff to working on its metaverse business. The metaverse could be worth as much as $280 billion by 2025, and Facebook wants to make sure its advertising presence is felt within it.

Small businesses need to compete in e-commerce to thrive in today's environment, and Shopify (SHOP 3.62%) helps them do it by providing the software for any merchant to own and operate an online store. More than 1.7 million merchants use Shopify's platform, and it cumulatively drives more web traffic than Amazon. There are tens of millions of merchants around the world, providing a huge addressable market for Shopify, which could continue growing for years. That addressable market has already shown growth with the company reporting revenue of $1 billion in the second quarter, up 57% year over year.

As of this summer, Shopify is now powering e-commerce functions within TikTok, the video-based social media platform with one billion monthly active users. E-commerce and social media have begun to integrate in recent years, and Shopify's new presence on TikTok could "move the needle" on growing that 1.7 million merchant base. This growth could be the tip of the iceberg for this company in the long term.