Social networking giant Facebook (META -0.86%) produces bales of free cash flow. Even after it covers all its costs, it's making so much money that it has plenty of cash left to spend on buybacks and other shareholder-friendly items. Here's why the company's free cash flow is likely to keep rising – and why that's great news for investors.

Facebook makes the bulk of its money by selling ads on its social networks – and according to the company, business is good. The economy's growing, and more advertisers are competing for ad space around the same limited number of user-targeting keywords. That rising demand lets Facebook charge more to sell ads, and rake in revenue as a result.

In its Q2 2021 earnings results, Facebook's CFO reported that the company's average price per ad rose 47% in Q2 and 30% in Q1. The total number of ads sold grew 6% year over year in Q2 and 12% in Q1 – meaning the company's getting most of its sales growth by charging more for each ad, rather than selling more total ads. The CFO expects that higher ad prices will keep driving Facebook's ad revenue growth for the rest of the year. 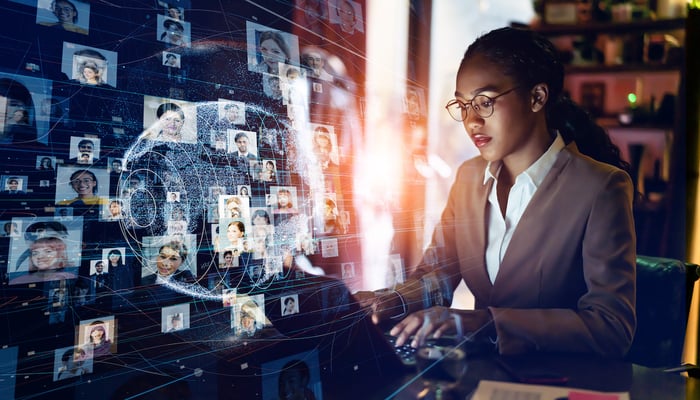 And as Facebook's revenue rises, so does its free cash flow. As the chart below shows, Facebook has consistently turned around 30% of its revenue into free cash over the past four quarters: 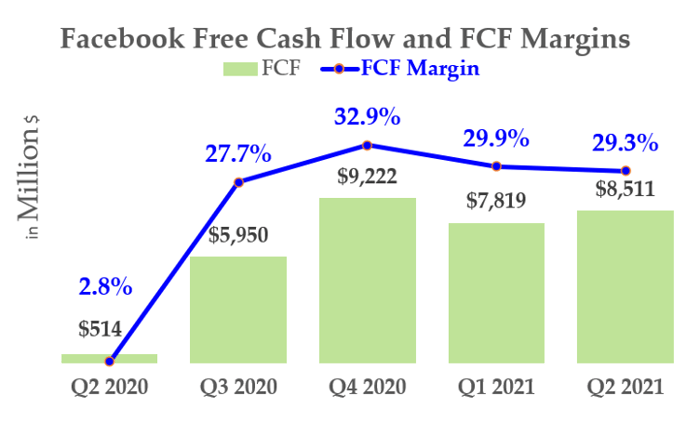 Facebook can generate this high level of free cash flow because its inherent operating profitability is very high. For every new ad that it takes on, it incurs minimal additional costs. That means that 30% of all new ad sales flow straight into its cash profits.

That free cash flow growth has helped the company boost its share buybacks from $1.4 billion in the year-ago quarter to $7.1 billion in its latest quarter . And both those factors have fueled investors' confidence in the company, driving Facebook shares roughly 40% higher  in the past year. 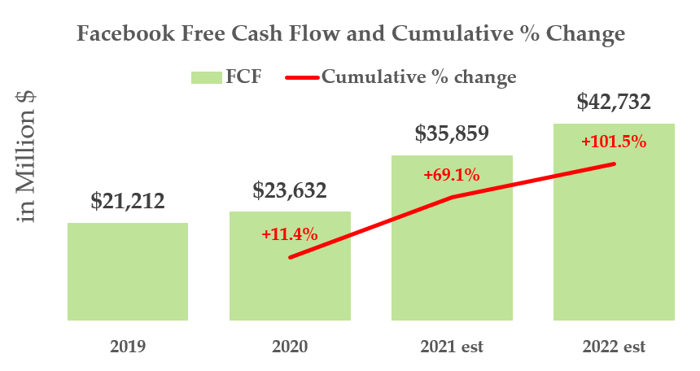 Investors will be keeping an eye on those free cash flow numbers – and using them to help determine how much they're willing to pay Facebook's shares.    As we publish this, the company sports a market cap just north of $1 trillion, alongside trailing-12-month free cash flow of $32.17 billion, for a price-to-free cash flow ratio around 32.7. If that figure simply holds steady over the next two years, the company's 2022 FCF estimate of $42.73 billion would imply a target market cap of nearly $1.4 trillion --  a gain of more than 30% from today's price.

Facebook is likely to announce its Q3 results before the end of October. If the company keeps reporting huge gains in its revenue per ad sold, as it has in the past several quarters, expect free cash flow to continue to rise. Facebook shares have posted solid increases in the past year, but additional FCF growth could keep fueling those gains. If it does, investors shouldn't feel timid about continuing to add to their positions in Facebook, or starting a new one.

Fool contributor Mark R. Hake, CFA holds no financial postion in any companies mentioned. Randi Zuckerberg, a former director of market development and spokeswoman for Facebook and sister to its CEO, Mark Zuckerberg, is a member of The Motley Fool's board of directors. The Motley Fool owns shares of and recommends Facebook. The Motley Fool has a disclosure policy.