These young tech companies could be the industry leaders of tomorrow.

Legendary investor Peter Lynch once said, "Know what you own, and know why you own it." In other words, it's important to understand a company -- what it does and why it matters -- before investing in it.

Building on that idea, Latch (LTCH 5.12%) and Upstart Holdings (UPST 17.13%) have the potential to impact the world in a big way, and both stocks look like smart additions to a diversified portfolio. Here's what investors need to know about these tech companies. 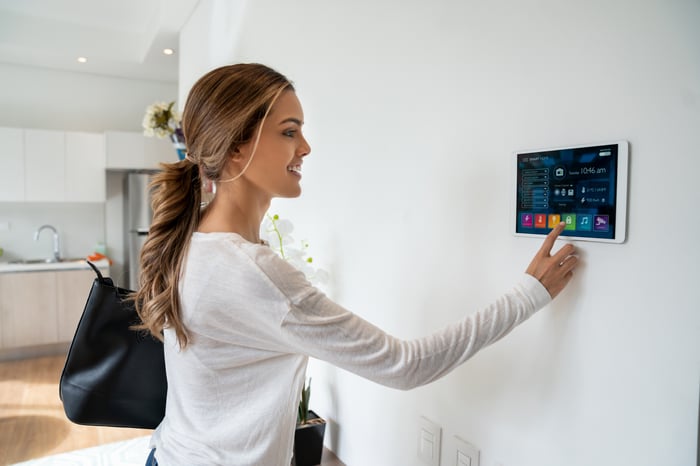 Latch specializes in smart-lock technology. The company combines its operating system (LatchOS) with a portfolio of first-party hardware, including access devices, delivery assistants, and intercoms, enabling clients to streamline and secure the entry experience. Rather than relying on keys, residents in Latch-enabled buildings are able to lock and unlock doors (and visually verify visitors) through the mobile app.

At the same, the company's cloud-based software helps property managers operate more efficiently, making it possible to control access permissions remotely. To add, the premium experience created by smart-lock technology also boosts revenue by $200 to $500 per apartment per year, while reducing maintenance expenses by $100 to $300 per apartment per year, according to internal estimates.

Since launching in 2017, Latch has gained a strong foothold in the apartment market. Over 10% of newly constructed apartments in the U.S. are equipped with its hardware and powered by its software. But the company recently brought its technology to commercial offices, and investors have every reason to believe Latch will be successful in this market, too.

As part of the company's expansion, it added a new service to its platform: Latch Visitor Express. This product simplifies visitor access for corporate offices and other commercial buildings, and Latch has already won contracts with iconic properties like New York's Empire State Building, Brookfield Place, and Rockefeller Center.

Broadly speaking, Latch differentiates itself by providing an end-to-end smart-building solution, including tools for smart access, guest and delivery management, and smart-home devices. This comprehensive approach stands out in a fragmented market, where many competitors address only part of the smart building experience, and others rely on third-party hardware, meaning clients have to stitch together incomplete solutions.

In June, Latch went public by way of a special purpose acquisition company (SPAC), and it's still a very young business. That being said, Latch delivered a strong financial performance through the first half of the year. Revenue surged 186% to $15.6 million, and total bookings -- a measure of hardware and software commitments not yet recognized as revenue -- hit $167.5 million, up 96% over the prior-year period.

Looking ahead, Latch is well positioned to maintain that momentum. The company has never lost a single client, underscoring the stickiness of its technology. And the average lifetime value of each client is 6.8 times greater than the cost of acquisition, according to management, evidencing an efficient business model.

Traditionally, banks have used credit scores to determine which borrowers qualify for loans and at what interest rates. But this methodology relies on a limited number of variables, meaning banks often fail to quantify risk accurately. As a result, many creditworthy individuals are denied while others are charged too much, effectively subsidizing the losses from borrowers that default.

To fix this broken system, Upstart relies on artificial intelligence to quantify risk. Its platform captures over 1,600 data points per applicant, then measures those variables against 10.5 million repayment events (and counting). This system captures traditional FICO scores, but Upstart also considers other information like employment history, educational history, and more.

That value proposition has translated into impressive growth. During the most recent quarter, Upstart powered 286,864 loans, up 1,605% year over year. Revenue skyrocketed 1,018% to $194 million, and the company posted a positive GAAP profit of $0.39 per diluted share.

Even so, Upstart has hardly scratched the surface of its addressable market. Each year, U.S. lenders originate $4.2 trillion in consumer loans, but Upstart powered just $2.8 billion of that total last quarter. Given the scope of its opportunity, it's not hard to imagine Upstart growing severalfold in the coming years.

In both cases, these companies benefit from the unstoppable march of technology. Latch replaces the traditional lock-and-key model with a modern, scalable solution, and Upstart intends to do the same with consumer lending. But a disruptive business model alone is no guarantee of a smart long-term investment.

That's why it's important to build positions in these stocks slowly, tracking the progress of their expansion. Latch sees a huge opportunity in the commercial sector, and Upstart expanded its platform to auto loans. If things go well for the companies, that would be yet another bullish signal to build a bigger position in their stocks.

Trevor Jennewine has no position in any of the stocks mentioned. The Motley Fool owns shares of and recommends Latch, Inc. and Upstart Holdings, Inc. The Motley Fool has a disclosure policy.

Nasdaq Bear Market: 3 Innovative Growth Stocks That Can Quadruple Your Money by 2033
411%