A key cost warning from one of the industry's leading names applies to all the major airlines.

One doesn't have to look far or long to identify plenty of headaches for the air travel industry.

Case(s) in point: The delta variant of COVID-19 is keeping some would-be travelers cautious for safety-minded reasons, while at the same time creating friction between airline employees and the airlines themselves; not every airline employee is keen on complying with vaccine mandates. Business travel spending is somewhat stifled, too, due to fears that an economic slowdown may be in the offing because of the lingering pandemic. The Global Business Travel Association reports that as of August, only 35% of businesses intended to send employees on business trips by plane within the following three months. That's down from July's measure of 68%. 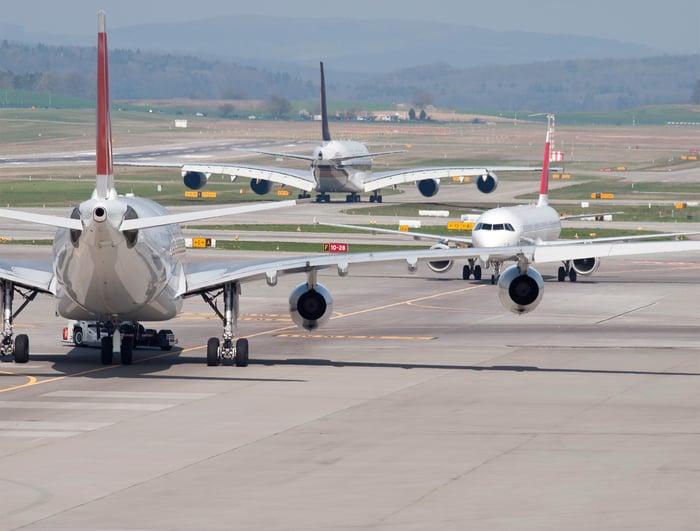 Then there's Southwest Airlines' recent operational debacle, resulting in the cancellations of roughly 2,500 flights this past weekend after its ticketing and scheduling platform was reportedly unable to handle a predictable staffing shortage. Its shares have been on the defensive since the week began, ending today's session down 5% from Friday's pre-glitch close.

If you're looking for today's bearish ringleader, however, look no further than Delta. Although the airline swung back to a pre-tax profit of $1.5 billion for the quarter ending in September, versus a loss of $6.9 billion in the comparable quarter of last year, CEO Ed Bastian warned investors on Wednesday that rising jet fuel costs are "going to be a limiter on our ability to post a profit in the quarter." Indeed, Bastian went on to explain, "At these current fuel levels, it looks like we'll have a modest loss" for the quarter now underway. For perspective, Delta says every $0.05 increase (per gallon) in fuel prices increases the carrier's operating costs by $40 million. Putting into perspective another way, jet fuel accounted for about one-fifth of the airline's operating costs last quarter.

Regardless of how it's quantified, in that other airlines are buying the same jet fuel at roughly the same price, Bastian's comments up-ended most airline stocks for the same reason Delta shareholders became so suddenly concerned.

The headwind will abate. It always does. Demand will recover, and operating costs -- particularly fuel costs -- will be pared back to more sustainable levels. Businesses are built to find the fair balance among supply, demand, pricing, and profitability.

In light of the fact that inflation could worsen before it cools again, though, this week's weakness from any airline stock isn't an entry opportunity for any investor not truly committed to a long-term position. Underscoring this near-term turbulence is today's inflation report from the U.S. Bureau of Labor Statistics. Consumers paid 5.4% more for basic goods and services last month than they did in September of last year, with gas and fuel oil prices jumping more than 40% year over year. Never even mind the other economic fallout on the horizon.