They've risen too far, too quickly.

Beauty is in the eye of the beholder -- and, in many cases, so is the appropriate valuation of a stock. One investor might view a stock as overvalued, while another investor sees it as relatively well priced. 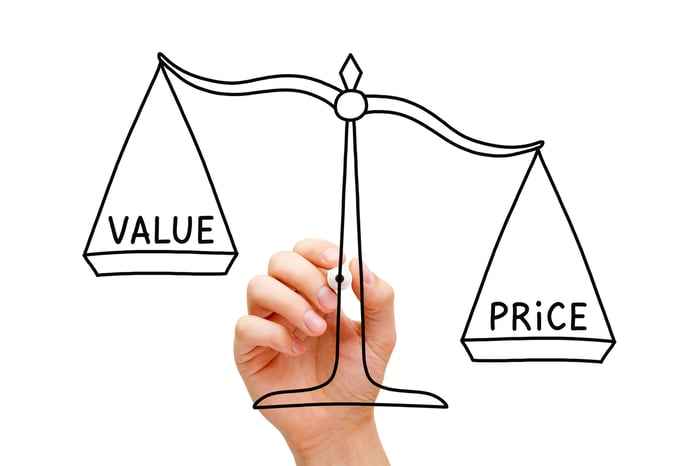 This biotech isn't worth the trouble

Prosper Junior Bakiny (Cassava Sciences): Investors have been flocking to this clinical-stage biotech all year long, pushing its share price up by well over 600%. It's still barely into the realm of mid-cap status, though, with a market cap of roughly $2 billion as of this writing.

Cassava Sciences is hardly worth that much, though.

It's is currently developing Simufilam for the treatment of Alzheimer's disease. Positive results from a pair of clinical trials -- coupled with the controversial approval of Biogen's Aduhelm earlier this year -- have helped the company's stock perform as well as it has this year.

But there are some reasons to worry. First, many companies have tried to develop effective drugs directed at the underlying causes of Alzheimer's disease. Nearly all of them failed, even after successful phase 2 studies.

Even the data from Biogen's pivotal trial for Aduhelm wasn't that convincing. That's why the Food and Drug Administration is insisting on a post-approval confirmatory study for the medicine. It could be taken off the market if it fails to prove that actually helps Alzheimer's patients.

Of course, just because others failed to develop an effective treatment for this condition doesn't mean Cassava Sciences will too. The point is, investors should view even the positive results Simufilam has produced so far with a healthy dose of skepticism.

Results from a 12-month open-label study of Simufilam weren't that impressive. Then there is the citizen petition that New York-based law firm Labaton Sucharow filed with the FDA requesting that the agency halt clinical trials featuring Simufilam. Labaton Sucharow is representing clients with short positions in the stock, so there are some financial incentives for it to target Cassava. Still, this dark cloud will continue to hover above the biotech for a while.

Add these to the other headwinds that Cassava Sciences could run into, including the very real possibility that Simufilam will fail miserably in its phase 3 clinical trials or that it will encounter regulatory setbacks, and this biotech stock looks far too risky to invest in, even at current levels.

Ocugen is too risky to take a chance on

David Jagielski (Ocugen): This company became popular among retail investors this year based on the hopes that it will be the next COVID-19 vaccine stock to make it big. There's just one problem: Ocugen's success in that regard will hinge on the approval of Covaxin, which it's co-developing with Indian biotech company Bharat Biotech.

Ocugen announced in June that it would pursue a Biologics License Application for its COVID-19 vaccine candidate in the U.S., based on a recommendation from the Food and Drug Administration. That involves a longer process than getting an Emergency Use Authorization, and implies that the agency may have been unwilling to grant emergency approval for the vaccine.

There was more positive news last week when India granted Emergency Use Authorization for Covaxin to be used to inoculate children ages 2 to 18. Unfortunately, that doesn't mean anything for Ocugen -- it only shares in the profits that the vaccine makes in Canada and the U.S.

But even though that good news out of India will have no notable impact on Ocugen's business, its stock price jumped anyway, topping the $10 mark for the first time in months. The performance of the company and the stock have simply not been connected. Through the first six months of this year, Ocugen has reported no revenue. Yet its shares have risen by more than 350% year to date.

The good news is that there is still hope for the business beyond just its COVID-19 vaccine. The company is moving forward on its gene-therapy treatment, OCU400, and it plans to begin clinical studies on it later this year. However, the human trials phase of OCU400's development, even if it's ultimately successful, will take years.

Given its market cap of $1.6 billion, I think that investors are taking on a ton of risk by buying shares of Ocugen. My view is that this is akin to gambling on penny stocks, except in those cases, at least, valuations can be incredibly low. In Ocugen's case, the stock may have limited upside.

Keith Speights (Moderna): Most of the critiques that Prosper and David had for Cassava and Ocugen don't apply to Moderna at all. The company already has a huge blockbuster on the market with its COVID-19 vaccine. It's rolling in profits as sales for the vaccine continue to soar.

Moderna even has a promising pipeline. It hopes to soon advance cytomegalovirus (CMV) vaccine candidate mRNA-1647 into late-stage testing. The company is evaluating an experimental flu vaccine in early-stage testing and hopes to develop a combination COVID-19/flu vaccine. In total, the company has 17 clinical-stage programs.

I think that Moderna's messenger RNA (mRNA) platform could produce many blockbuster vaccines and therapies over the coming decades. My view is that it's a great company. However, I also think that its shares are just too expensive now.

Some might point to Moderna's forward price-to-earnings multiple of 11.2 as evidence that I'm dead wrong about the stock being overvalued. However, the problem with this metric is that it only looks one year into the future. Moderna's CEO has predicted that the pandemic could effectively end by late 2022. If he's right, I suspect that the company's revenue and earnings could fall off significantly after that.

Remember that Moderna's enormous success so far has resulted from a two-dose initial regimen of its COVID-19 vaccine. Boosters of that vaccine will only require one shot. More importantly, there's uncertainty about how frequently boosters will be needed. Governments around the world could also become more price-conscious about what they'll pay for COVID-19 vaccines in a post-pandemic environment.

Perhaps things will unfold in a way that justifies Moderna's current valuation. For now, though, I think there are more outcomes that could cause this stock to fall than there are catalysts that could make it soar again.

COVID, Shmovid: This Could Be the Next Big Growth Story for Moderna Stock
420%