Looking at the energy space? Here are three names that span different niches, all of which have long-term appeal.

The broader energy sector covers a lot of ground, spanning from oil drillers all the way to electricity providers. And there's a lot in between as well in a sector that is going through major structural changes. But with a growing world population and economic growth in emerging markets, one thing is fairly certain -- energy will be increasingly important in the future. If you're looking to play the space, it's worth looking at AES (AES -2.35%), Enbridge (ENB 0.47%), and TotalEnergies (TTE -1.92%) today. 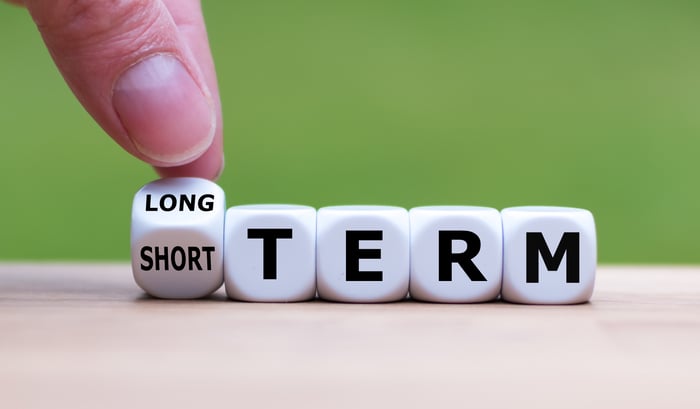 To put some numbers on all of this, AES has operations on four continents across 14 countries. Its foundational operations are regulated utilities in the U.S. and South America, with a global contract-based generation business built on top of that. The company is working to take advantage of the clean energy shift that's taking place globally by refocusing around cleaner alternatives to coal-based power.

Effectively, AES offers investors a way to play the global shifts taking place in the energy sector. The yield is modest at around 2.4%, but the dividend has been increased annually since 2014. That said, the allure of this stock is really the company's broad reach and increasing clean energy focus, both of which should be beneficial over the long haul.

Canada's Enbridge is one of the largest midstream companies in North America. It claims to have more miles of oil pipeline than any other company, with a number-two ranking in natural gas pipes. Its assets would be virtually impossible to replace or replicate. In addition to these two businesses, it also owns a natural gas utility operation and a small renewable power business (just 3% of earnings before interest, taxes, depreciation, and amortization, or EBITDA).

The key here is that carbon-based fuels like oil and natural gas might be out of favor with ESG investors, but they are still vital parts of the global energy chain. And there's no quick or easy way to get rid of them. In fact, demand for these two fuels is probably going to increase over the near term before leveling out -- decades from now.

What makes Enbridge so interesting is that it is using its position in dirtier fuels (like oil) to transition toward cleaner options (like offshore wind), with natural gas investments acting as a bridge between the two. Essentially, like AES, it is shifting with the world around it. And while it's making the transition, investors can collect a generous 6.1% dividend yield backed by over 25 consecutive years' worth of dividend hikes. Note that this puts Enbridge in Dividend Aristocrat territory. One key feature that conservative investors will appreciate is that Enbridge's business is largely fee-based, as it gets paid for the use of its assets. Thus the pipeline giant tends to be a very reliable dividend-paying company, a fact proven by its impressive dividend record. 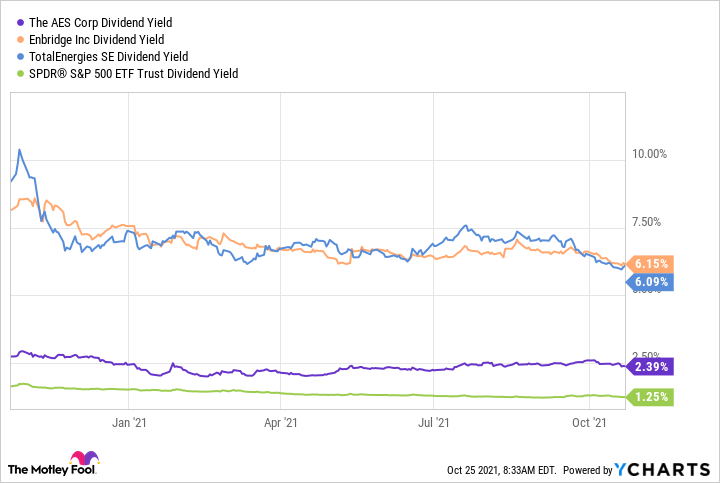 3. Playing with its cards on the table

French integrated oil giant TotalEnergies is one of the largest energy companies on Earth. That said, its top and bottom lines are tied tightly to the price of oil and natural gas, so earnings can be volatile at times. However, the long-term picture underpinning demand for Enbridge's pipelines also underpins demand for TotalEnergie's oil and natural gas. This is the company's cash cow business, and helps to support one of the most generous dividend yields in the energy major space at 6%.

What's interesting here, however, is that during the 2020 energy downturn TotalEnergies was the only one in its peer group to specifically state that its dividend was safe so long as oil averaged around $40 per barrel. More recently, management noted that dividend growth is likely if oil remains above $60 per barrel.

That's all well and good for investors that want to own an oil company. However, like the two names above, TotalEnergies has seen the writing on the wall and is looking to clean up its environmental act. That includes slimming down to only its best oil investments, increasing its exposure to transition fuel natural gas, and increasingly investing in electricity assets. The goal is to use the cash cow operations to fund the clean energy move. So far the process has gone quite smoothly for investors -- especially given that two of TotalEnergies' European peers that are going down the same path chose to cut their dividends. That makes this stock a good mix of income, diversification, and clean energy for long-term investors.

If you can handle the stigma

Each of the companies above has one solid foot in the old, dirty world of carbon fuel. But they are all using that as a way to step into cleaner options, which is a long-term effort that should benefit both investors and the world over time. If that makes sense to you, given the multi-decade effort involved in shifting the world to clean energy, then AES, Enbridge, and TotalEnergies are all worth close looks today.