Please ensure Javascript is enabled for purposes of website accessibility
Log In Help Join The Motley Fool
Free Article Join Over 1 Million Premium Members And Get More In-Depth Stock Guidance and Research
By Reuben Gregg Brewer - May 27, 2021 at 9:01AM

Utility AES has big plans in the clean energy space, but it's important to remember that it isn't your run-of-the-mill utility.

Utility AES Corporation (AES 1.66%) is leaning hard into the low-carbon zeitgeist driven by the world's push to mitigate climate change. This is going to drive increased spending for years to come as the company works to take advantage of what it calls "a once-in-a-lifetime transformation" of the energy sector. Should investors go along for the ride here, or would it be better to wait and see how this big shift plays out?

AES expects the amount of renewable power in the world to expand five times over by 2050. That means a huge amount of spending is going to be taking place over the next 30 years or so, which is a massive opportunity for utilities. AES itself is looking to hit net-zero emissions by 2040, which will require a material amount of renewable investment. That's the backdrop for the company's roughly $4.8 billion in planned spending through 2025, 65% of which is earmarked for renewables. 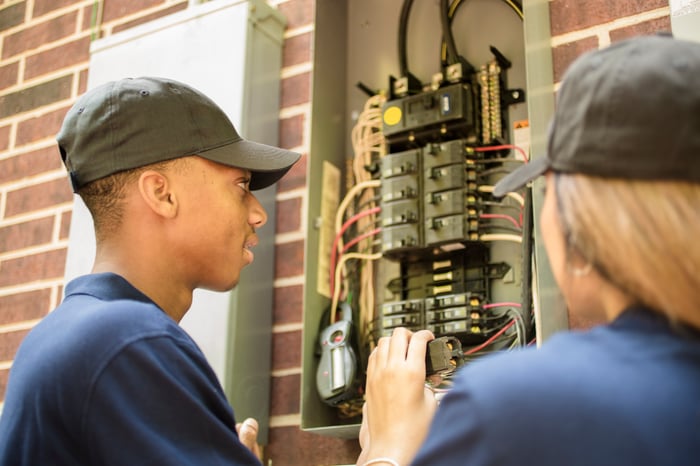 Utilities like AES use capital spending plans to justify higher rates with regulators. So this spending is a key factor behind the company's 7%-to-9% earnings growth projections through 2025. Those are material numbers in the utility space, so this is no small transformation that AES is looking to undertake.

AES isn't simply relying on new construction to support its clean energy shift. In 2020 the company generated roughly 45% of its power from coal. However, during the year it announced or enacted plant sales and retirements that, on a pro forma basis, would have reduced that figure to just 25%. Meanwhile, it invested in clean energy assets that helped increase clean energy's piece of the generation pie from around 25% to nearly 45%.

AES is working fast to take advantage of the clean energy transition. By 2025 it expects to have coal down to less than 10% of the generation mix.

3. Not exactly a typical utility

So far, AES sounds like an interesting way to play the clean energy space. And the company is pushing this story pretty hard today, with its first-quarter earnings presentation material basically starting on that topic.

But investors need to go in with an understanding that AES is somewhat unique, because it has a multi-country footprint. In 2020, the company's adjusted pre-tax contribution from the U.S. was just 34% of its total. South American operations kicked in another 35%, with Mexico, Central America, and the Caribbean adding up to 19%. Eurasia rounded things out to 100%. This geographic diversity brings with it additional risks that investors need to consider, such as currency shifts between countries. Conservative investors might want to err on the side of caution here and stick to more generic (one-country) fare.

One more notable issue to consider is valuation. AES's current dividend yield is roughly 2.4%. The average utility, using Vanguard Utilities Index ETF as a proxy, is offering a 3% yield. AES's yield is also toward the low end of its recent range, and it's important to note that the company only started paying a dividend again in 2012. The stock price, while about 10% off its the recent peak, remains near its highest levels in the past decade and up more than 100% over the past year. 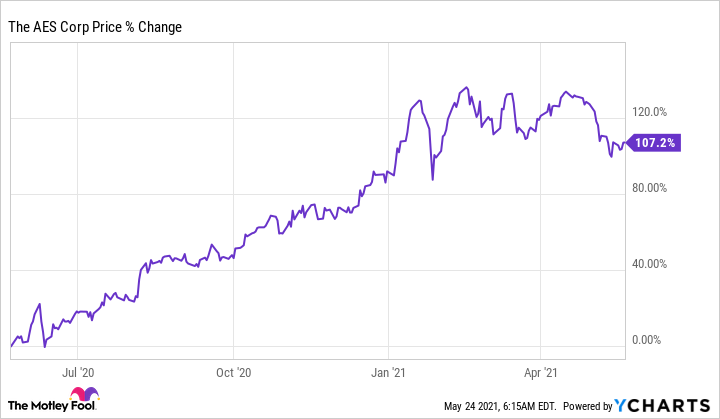 In fairness, the past 12 months haven't exactly been a normal period, so that may not be the best comparison point. However, it does highlight how fast and far the stock has advanced in a very short period of time.

And AES's stock price is over 25% above where it started out in 2020. The average utility, for comparison, is up just 1% over that span. Investors have clearly looked favorably on AES of late, which likely comes from its renewable power shift. However, some in the renewable power space are suggesting that competition in the industry is getting intense, and that could mean lower investment returns in the future for stocks that are investor darlings today. That, in turn, could result in mercurial investors becoming less supportive of renewable power names like AES.

AES is certainly an interesting name in the utility sector, but it isn't a great pick for every investor. Conservative types, those seeking to maximize the income they generate, and investors with a value bias should probably avoid it. In fact, you'll really need to believe in the long-term future of renewable power to justify stepping in here, since the stock appears to be riding the market's zeitgeist for such names. Just go in knowing that if sentiment changes about renewable power, AES's stock will likely fall.