Doubters continue to bet this ticker is due for a pullback, ignoring how undervalued shares are even with the brewing headwind.

For a few brief moments this week shares of Big 5 Sporting Goods (BGFV 0.93%) looked they were shifting into a higher, bullish gear. Specifically, in response to Tuesday's post-close release of the company's fiscal third quarter results, shares jumped more than 14% on Wednesday and were up more than another 34% at one point on Thursday.

The rally wouldn't last, however. By the time Thursday's closing bell rang the stock had fallen back to a mere breakeven for the day, dashing hopes that this closely watched ticker might finally start to rally in the way so many people seem to be hoping it will.

Those shareholders need not give up that hope though. Big 5 is a serious short squeeze candidate. One of these surges could eventually jump-start a rally that sends the stock soaring in a more sustained way. 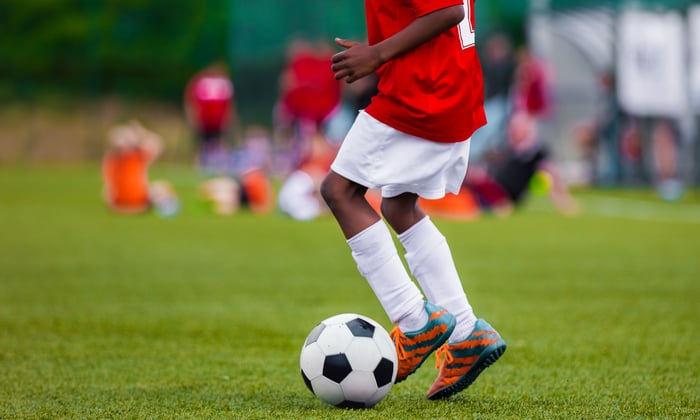 As the old adage goes, a picture is worth a thousand words. The image below plots Big 5 shares' ever-growing short interest; short trades are bets that a stock will lose value rather than gain in value, offering these short-sellers a chance to sell high and then buy low. As of the latest count, 8.5 million -- or 37.8% -- of the outstanding shares of BGFV are shorted. That's four times the short interest seen as recently as early this year. 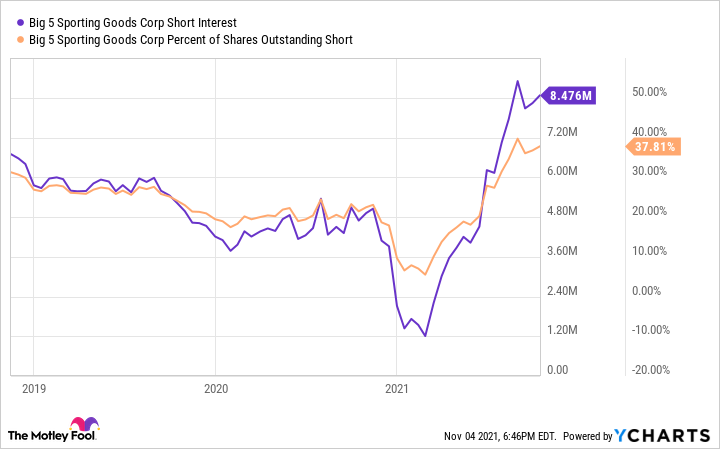 These risky bets against the value of Big 5 stock aren't completely without merit. After what should prove to be stellar sales growth of nearly 14% this year that drives per-share earnings up from last year's $2.46 to $4.22, analysts expect the company to bump into a headwind. Namely, the analyst community is calling for a sales contraction of 3% driving per-share earnings back down to $3.11 for 2022. The stock's continued to rally from its March-2020 low, however, in a way that suggests such a slowdown isn't in the cards.

Largely being ignored by the stock's bears is the fact that even with this expected slowdown shares are still arguably undervalued at 10.2 times next year's anticipated profits.

What's so unusual -- and even a little dangerous -- about the current scenario is that as long as the Big 5 Sporting Goods shares continue to hold their ground, the short sellers continue taking on new short positions in it.

Given this firm bullish thesis, the heavy (and growing) degree of short-selling actually works in favor of existing shareholders and against any investors currently holding a short position in the stock.

Short positions are dangerously different than conventional "long" positions in a stock. Whereas the maximum potential loss on a typical owned position of a stock is the amount of the initial investment in the trade, the prospective loss on a short position is, in theory, infinite. The stock must be bought back to replace the shares that are sold short; it's just a question of price. Ideally that repurchase is done at a value below the price at which those shares were shorted. If the value of a stock that's sold short starts to rise though, short-sellers have a tough call to make -- either close-out the trade at a loss, or wait for another pullback that may never actually happen, leading to an even bigger loss.

The "squeeze" aspect of a short squeeze is a rally that looks so strong that many short-sellers lose their nerve and buy the stock at a loss to cover their short position. This buying, of course, presses the stock even higher, spurring more short-covering, sparking even more panic-induced buying, and so on.

And with 8.5 million of Big 5's 20.3 million outstanding shares needing to be bought back sooner or later, this stock represents one of the market's most explosive short squeeze candidates.

Indeed, such an event may be closer to taking shape than it seems. Three different times since May this stock has logged short-term price surges in excess of 40%. While all three of these moves eventually lost their momentum and fell back, these abrupt rallies suggest there's at least a small faction of traders actively trying to spark a short squeeze... by rattling the short sellers with sharp gains that just might force them to cover their short positions. 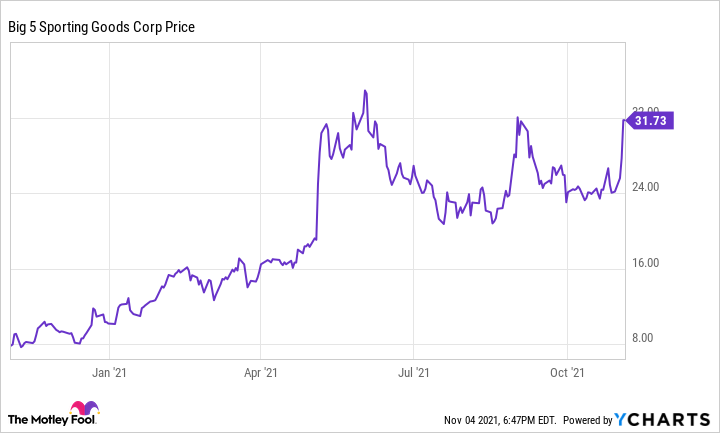 A potential short squeeze isn't the only reason to own a stock, but if you like Big 5 Sporting Goods, it's certainly another reason to own this one.