Following huge swings over the last two months, the biotech stock is now up 67% year to date.

Shares of Protagonist Therapeutics (PTGX 5.79%) soared 80.2% in October, according to data from S&P Global Market Intelligence. The stock surged after the U.S. Food and Drug Administration (FDA) removed a clinical hold that had been placed on the company's rusfertide drug for the treatment of hereditary hemochromatosis, polycythemia vera, and other diseases related to iron dysregulation.

Protagonist's stock plummeted after the company announced on Sept. 17 that the FDA had placed a clinical hold on rusfertide's development following the discovery of both malignant and benign tumors that had been found in mice that the drug had been tested on. Protagonist then announced on Oct. 11 that the regulatory agency had removed the hold, paving the way for the drug's clinical testing to resume and helping the stock rebound. 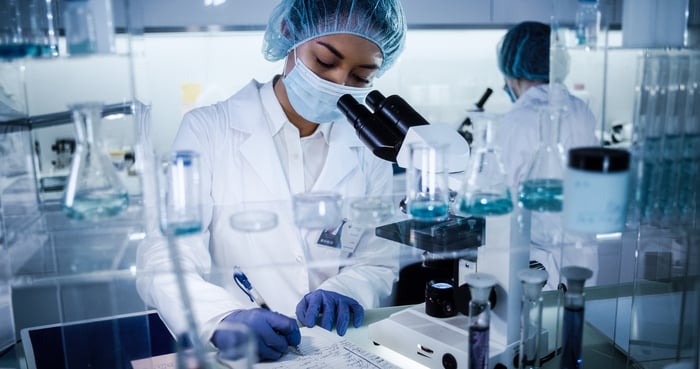 Protagonist stock has seen some huge swings across 2021's trading. Last month's rally came on the heels of a 63.5% decline for the company's share price in September. 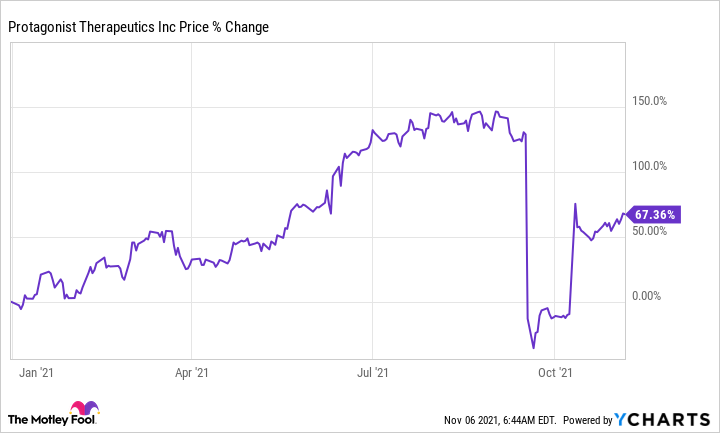 The FDA removed the clinical testing hold on rusfertide after Protagonist provided additional individual patient clinical safety reports and updated patient informed consent forms and included new safety and stopping rules in its study protocols. The biotech stock skyrocketed following the news, but it's still trading significantly below its pricing level prior to the initial hold announcement.

Protagonist stock has continued to make gains early in November's trading. The company's share price is up roughly 2.4% in the month so far. 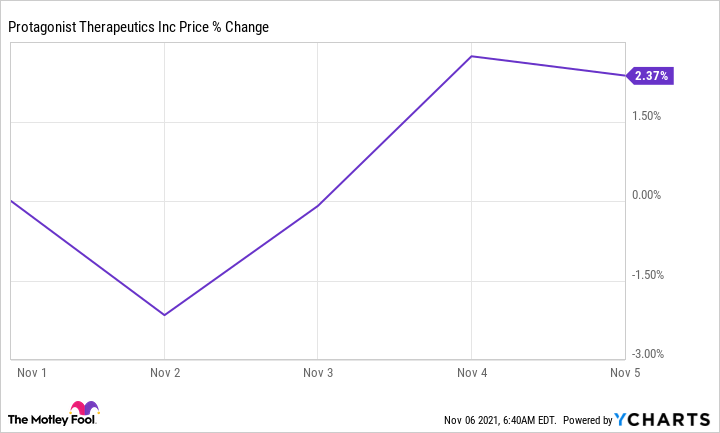 Protagonist Therapeutics published its third-quarter results on Nov. 3, reporting a net loss of roughly $33.8 million on revenue of $10.3 million. It closed out the quarter with cash and short-term investments worth $352.5 million.

The company also published a press release on Nov. 4 announcing that abstracts from updated phase 2 studies on rusfertide for the treatment of polycythemia vera and hereditary hemochromatosis will be presented at the American Society of Hematology's annual meeting, which is set to take place from Dec. 11 through Dec. 14.

Rusfertide is broadly viewed as Protagonist's most important product, but it's not the only treatment in the company's pipeline. In addition to two treatments in early development stages, the biotech also has a treatment for ulcerative colitis in phase 2 proof-of-concept studies and a treatment for Crohn's disease developed in conjunction with Johnson & Johnson that's currently in a phase 2 study.

Protagonist Therapeutics now has a market capitalization of roughly $1.6 billion and is valued at approximately 68 times this year's expected sales.

Why Protagonist Therapeutics Is Skyrocketing Today