A waning pandemic and continued acquisitions are bolstering results, even if investors can't determine exactly by how much.

For the three-month span ending in September, Cano Health turned $526.8 million worth of revenue into a net loss of $40.9 million. On an adjusted basis, however, the company reported earnings before interest, taxes, depreciation, and amortization (EBITDA) of $35.2 million.

Last quarter's EBITDA improved on a COVID-crimped figure of only $23 million from the same quarter a year earlier. Perhaps more important, reported revenue easily topped expectations of $447.6 million and doubled the year-earlier comparison of $263.1 million. 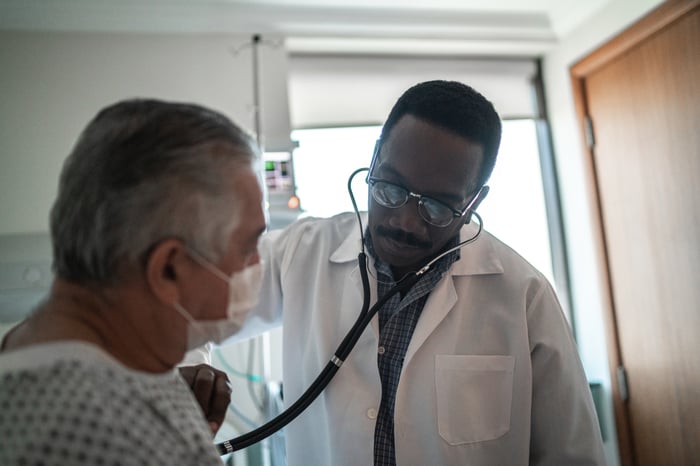 Bolstering Tuesday's bullishness is the company's revised guidance for the current year. Cano Health now anticipates revenue of around $1.7 billion, up from its previous outlook of $1.6 billion. The projected EBITDA of $118 billion lifts previous guidance of $115 million. Continued acquisitions made in the meantime should pump the company's 2022 top line up to between $2.6 billion and $2.7 billion.

That's the problem with reading too much into Cano's recent or projected fiscal results. The pandemic prevented many people from seeking out primary-care services last year, and now that it's winding down, it's difficult to determine if consumers are still shying away from in-person doctor visits or catching up with visits that are overdue. In the meantime, dealmaking only further obfuscates how much revenue the company should be generating and how much profit it should be earning, as these acquisitions are resulting in a growing debt load.

In lieu of actual net income from Cano Health or even predictable sales, investors can only make best guesses as to the value of the stock. Today's surge mostly stems from the fact that the company is faring relatively better than investors thought it was, prior to this-morning's news. That's not a solid-enough basis for most investors to take such a risk, given so many other better options are out there.

Still, given the stock's ho-hum performance over the course of the past 12 months, Tuesday's bump could be a catalyst for more speculative gains. It will just take a few days to determine if that's what's going to take shape.

Why Shares of Cano Health Plummeted 29.5% This Week