All three reported earnings results around the same time, but what they had to report was very different.

A trio of fast-casual restaurant companies -- Shake Shack (SHAK -4.44%), Chuy's Holdings (CHUY 1.09%), and El Pollo Loco Holdings (LOCO 0.63%) -- served up third-quarter earnings results on Nov. 4. The market capitalization (market cap) of Shake Shack is more than three times larger than that of Chuy's and El Pollo Loco combined, putting some limits on how comparable the chains are. Nevertheless, the three reports give a useful snapshot of how each restaurant is performing in the post-lockdown portion of 2021.

The reports also offer clues as to which restaurant chain has strategies most likely to generate bullish results going forward. Let's take a closer look. 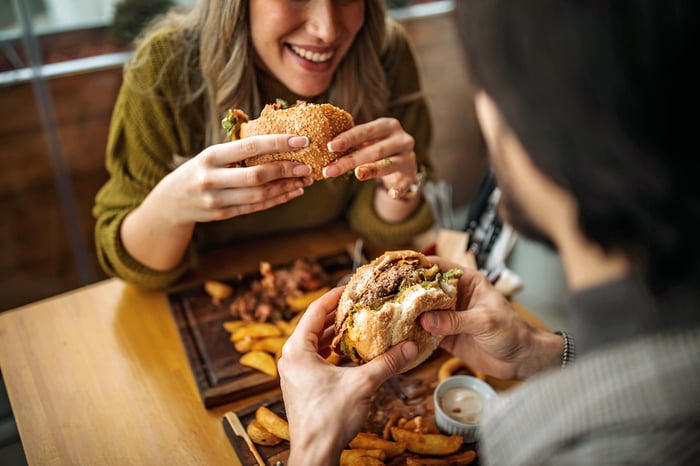 A general glance at the operating environment

The reopening of dine-in facilities has been a mixed blessing for fast-casual restaurants. Pent-up consumer demand for restaurant dining is making itself felt, but it isn't contributing enough to return to pre-pandemic levels. In 2020, it was the restaurant chains that were best able to adapt to delivery, curbside pickup, and drive-thru that boomed. Family restaurants and more expensive dining establishments struggled, reducing competition for their fast-casual peers, who were generally better prepared to serve the at-home ordering needs of their customers.

According to research this past year from Allied Market Research, that preparedness will serve the fast-casual sector going forward as well with sales increases at a compound annual growth rate (CAGR) of 10.6% between 2021 and 2027.

So, how is this affecting the three restaurant chains in question?

Boutique burger joint Shake Shack delivered mixed results for its third quarter, as it showed signs of life after getting hit by the COVID-19 lockdowns last year. Its $193.9 million in revenue surged 48.7% year over year, though it was lower than Wall Street consensus, while its bottom-line $0.05 adjusted loss per share was $0.01 better than analyst forecasts. Its share prices spiked briefly over $100 following the report before dropping back to the low $80s.

So the 48.7% revenue surge is almost certainly an artifact of the rebound from COVID-19 lows. Conversely, this also means Shake Shack isn't lagging the industry but is growing almost exactly in step with the sector.

The company's Same-Shack Sales were down 1% versus 2019, according to its Q3 earnings report. Current and planned openings of new Shacks both in the U.S. and abroad should improve or at least maintain this number, as will increased pricing.

Tex-Mex restaurant chain operator Chuy's Holdings had almost exactly the opposite situation to Shake Shack. Its quarterly revenue of $101.9 million is up 24.3% year over year but down approximately 6.6% from Q3 2019's $109.1 million revenue. However, its adjusted net income more than doubled from 2019's figure (and rose 48.8% year over year), with $0.45 adjusted EPS soaring 80% over the same period.

The company's revenue shrank compared to 2019, but its earnings rose, and that's despite some dilution of its shares. It is also looking to reduce its share count again, earmarking $50 million for stock repurchases. Part of the reason for the revenue drop was continued government COVID-19 measures during the quarter in areas it serves that forced capacity restrictions on some of its restaurants.

Even with these limitations, Chuy's operating margins rose to 23%, which happened, according to CEO Steve Hislop during the Q3 earnings conference call, because of "continued focus on cost management and operating efficiencies." Margins are expected to be boosted further going forward by the company's return to a full menu. Potentially countering this, Chuy's expects price inflation in raw food materials, particularly beef and beans, to increase costs in 2022.

Chuy's opened four restaurants in 2021, one of them in Q3, and is planning to launch six to eight new locations next year. Overall, the company looks to be building revenue back toward 2019 levels and is operating more efficiently, but it isn't poised for any strong expansion in the near-to-mid-term.

El Pollo Loco, a fast-casual chain specializing in grilled Mexican-style chicken, missed Wall Street consensus expectations at the top line while beating the bottom line. Its revenue actually grew 3.2% above 2019's result, reaching $115.7 million, but is rising slower than the fast-casual sector's CAGR average. If it were in line with sector growth, its revenue would have been closer to $137.1 million.

Operational efficiencies helped El Pollo Loco serve up spicy bottom-line gains, with net income of $10.2 million surging 59.7% over Q3 2019 and adjusted $0.28 EPS up 55.5% over the two-year stack. The chain largely avoided COVID-19 limitations in the quarter, but its revenue was depressed by the sale of eight restaurants and a likely temporary dip in its loyalty program proceeds.

While Chuy's is looking for modest growth only, interim El Pollo Loco CEO Larry Roberts says the company's "focus on the acceleration agenda will continue to build momentum in our core business for rapid and successful growth over the next three years." He expanded on the topic during the Q3 earnings conference call, saying the company is looking to aggressively increase its geographic footprint while keeping its asset-light business model, largely based on franchises.

Roberts said El Pollo Loco is working to expand the digital side of its business and to "focus the brand on our most valuable core equities and exaggerate them to the point where we really stand out" relative to the competition. This presumably means expanding its menu along with maintaining high levels of service. But its 2021 net increase of three to six locations looks rather slow compared to its current network of 475 restaurants.

Choosing which of the three restaurant stocks is the best to add to your portfolio in late 2021 requires you consider several factors. Shake Shack is growing its revenue in line with the sector but is still generating bottom-line losses. Chuy's and El Pollo Loco are both showing weak top-line growth over the two-year stack but made significant improvements in earnings. Both of the smaller chains also managed to generate positive net income, while Shake Shack is still operating at a net loss.

Chuy's is treading water, with unambitious expansion plans and slightly shrinking revenue. El Pollo Loco might be a secondary choice, especially if it breaks out of its geographical region in the Southwest and expands into other areas of the U.S. -- a pick for investors who don't mind some risk and like to bet on the spirited underdog with hints of larger future potential.

Despite its net loss, Shake Shack is the only one of the three showing revenue growth matching the fast-casual sector's forecast CAGR. Its expansion plans are the most concrete and detailed, and if it keeps generating consistent revenue growth, its earnings will probably climb into positive territory sooner or later. It appears to be the best investment out of the three right now.