The worst appears to be over, and the company is returning to growth.

Shares of better-burger chain Shake Shack (SHAK -0.77%) skyrocketed on Friday, following the release of financial results for the third quarter of 2021. The company achieved record quarterly revenue, and investors were pleased. At one point, the stock had eclipsed $100 per share for the first time since May. It later pulled back from session highs but was still trading 22% higher as of noon EDT today.

Much of Shake Shack's sales volume comes from large, urban areas. Because of this, the company suffered more than most of its peers, because these cities tended to have stricter guidelines for containing the spread of the pandemic. Therefore, year-over-year comparisons looked strong for Shake Shack in the third quarter because restrictions have eased. For example, its revenue was up an impressive 49% from last year to $194 million. 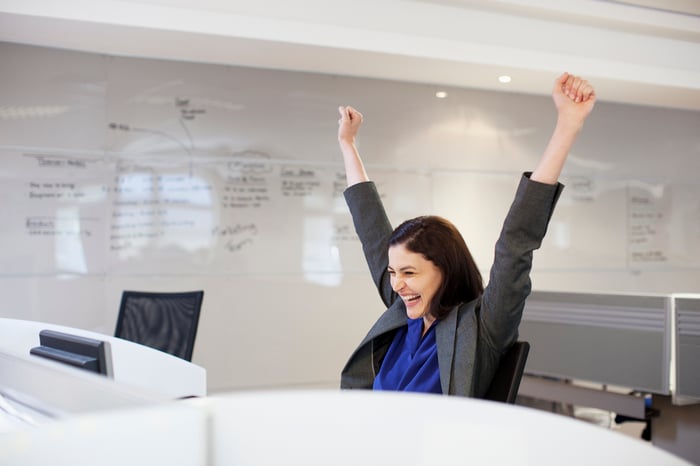 Wall Street analysts, like retail investors, also approved of Shake Shack's quarter. Specifically, BTIG analyst Peter Saleh upgraded the stock, according to The Fly, giving it a price target of $100. In particular, Saleh thinks the worst is over for Shake Shack, praising the company's efforts to preserve profit margins.

The issue of profit margins is something to watch for Shake Shack. The company raised menu prices more than it typically does because of inflation. Management cited the price of beef in the conference call to discuss third-quarter results, saying that it's 30% more expensive now than this time last year -- a big deal for a restaurant chain specializing in hamburgers. Moreover, Shake Shack prides itself in taking care of its employees, but labor costs are going up as well.

The situation regarding profit margins is cloudy, as is next quarter's revenue. Management is guiding for fourth-quarter revenue between $193.5 million and $200 million. However, it notes that this assumes new locations will be open in time to contribute. Therefore, revenue could come in lower if there are delays in new openings. And considering the labor shortage in construction trades, it might be a good idea for investors to go ahead and temper fourth-quarter revenue expectations.