The company formerly known as Facebook is making a dual foray into the metaverse and crypto.

The idea of the metaverse has been building momentum for years, but Facebook's decision to rebrand as Meta Platforms (META 1.30%) has catapulted the tech concept into mainstream consciousness. Seemingly every media outlet around is talking about the metaverse and how it could change our lives forever.

But the metaverse -- this idea of a digital world that embodies the internet itself, accessible via a virtual reality headset -- extends far beyond video games and shared experiences via the web. Meta Platforms also has cryptocurrency plans in the works, as further entrenchment of the digital world in everyday life will also rewrite the script on what it means to purchase and own something. 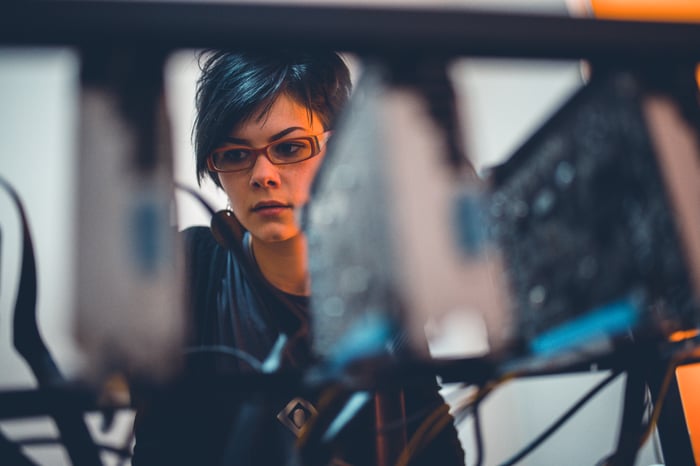 Facebook's name change to Meta Platforms is just the latest signal that the company has aspirations that go much further than operating a massive social media empire with billions of users. For a couple of years now, the company has been working on its own blockchain and cryptocurrency, first known as Libra but later renamed Diem after government regulator scrutiny. Diem remains in holdup as it has yet to receive clearance in the U.S. as a digital payments platform.

What does this have to do with Meta Platforms? Cryptocurrency and the metaverse are more correlated to each other than many realize. The term metaverse dates back to the 1992 sci-fi book Snow Crash by Neal Stephenson. And as the internet has grown, a currency built for the exchange of digital assets was the original idea behind Bitcoin (BTC 0.42%). Bitcoin's rise has spawned thousands of other "altcoins" and blockchain networks, many of which try to solve various pain points in the digital economy.

Blockchain developers latched on to the idea of the metaverse early on. As daily use of digital tools and entertainment increases, so will ownership of digital assets over time.

But how do you guarantee the rights to a virtual item -- like a piece of art, work of music, or a video game item? Even more thought-provoking, how about digital versions of personal items such as clothes and accessories? That's where blockchain technology comes in.

An early use for NFTs based on a blockchain has been digital art, but it could become the very fabric of the metaverse itself that guarantees the virtual stuff you own in your digital-alt life isn't stolen.

This is all pretty radical thinking, but the idea was roughly approximated and visualized by Stephen Spielberg's movie adaptation of the novel Ready Player One by Ernest Cline. And that's why Facebook's metaverse focus and Diem cryptocurrency are so important. Simultaneous with its construction of a shared virtual world where people can hang out, interact, and do business, the company is also building a financial framework from which users can purchase and store their digital items as well.

The metaverse could seal the deal for decentralized digital currency

To be sure, it's still early days for the metaverse and cryptocurrencies. In fact, on the Q3 2021 earnings call, newly christened Meta Platforms CEO Mark Zuckerberg said actual financial results won't be meaningful for the metaverse (and, likely for the related crypto project) until much later this decade.

But experimentation with this project is already underway. While Diem (and its bank partner Silvergate Capital (SI 9.96%)) waits in the wings, Meta Platforms recently launched a crypto wallet project called Novi (which, surprise, was also rebranded and formerly known as Calibra).

The digital wallet pilot program will use the stablecoin Paxos (PAX 0.79%) and partners with Coinbase Global (COIN 4.13%) to enable a small batch of users in the U.S. and Guatemala make peer-to-peer cross-border money transfers (known as remittances). The remittance industry handles hundreds of billions of dollars per year and is highly profitable, and Novi hopes to speed up the process of moving money between family members along with cost savings. For now, Novi will be free to use.

Basically, we are in the early experimentation phase for cryptos and the metaverse, Novi being just one such experimentation by the company formerly known as Facebook. But if Meta Platforms pulls off its aspirations, it could have one of the most robust computing platforms encompassing video games and apps, a payments and asset security system, and all the supporting infrastructure behind it by the end of the 2020s. A patchwork of other interoperable blockchains (like Ethereum), apps (like those built by the likes of Unity Software), and infrastructure (like semiconductors designed by NVIDIA) based on truly decentralized principles could be the main rivals to Meta Platforms.

In other words, Meta Platforms and its billions of monthly social media users all but seal the deal: digital currencies and assets are sticking around for good. Now begins the race to build the best metaverse with a supporting digital asset experience.

2 Blockchains That Could Explode Thanks to Instagram's NFTs