Facebook Reality Labs will soon get its own line item, separated from the social media apps.

Just a few months after Facebook (META -0.25%) CEO Mark Zuckerberg said his business was going to bet big on the "metaverse" (a virtual world where real people can play and work together), Facebook is readying some extra transparency on this business segment. And for good reason. Facebook Reality Labs (or FRL, the augmented and virtual reality unit that's building the metaverse) is receiving massive amounts of cash to develop new hardware and software technology, and could already be quite large today. Here's what you need to know.

Building the foundation of the metaverse

Starting in the fourth quarter of 2021 (which the company will report in January 2022), Facebook will add a new line item for FRL results and disclose the massive investments the company is making. This will separate Facebook's virtual reality operations from the advertising empire, which will now be called "Family of Apps" and include Facebook, Instagram, Messenger, WhatsApp, and other services. But what exactly is Facebook Reality Labs? 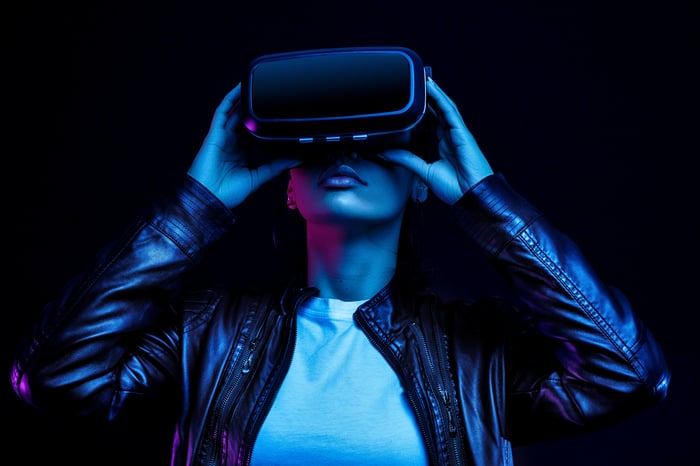 The Oculus augmented and virtual reality (AR/VR) business is the core of FRL. It includes hardware like Oculus Rift, designed to be used with a VR-ready PC; Oculus Quest, a stand-alone unit that delivers virtual worlds without the need for a separate computer; and mobile AR/VR headsets designed for use with a smartphone, like the now-discontinued Samsung Gear VR powered by Oculus.

Facebook is only beginning to put the foundation into place for the metaverse. Besides the development of better hardware and VR headsets, it will also need to build software, expand on its commerce platform, make new social tools, and of course construct new infrastructure like data centers to support it all.

On the third-quarter earnings call, Zuckerberg said that this will be a "business story" later this decade, but for now, the team is focused on building the right products before assessing the financials. Management stated these FRL investments will reduce Facebook's operating profit by about $10 billion this year. To put that figure in perspective, it's just over half of Facebook's total expected capital expenditures on property and equipment in 2021. This investment will also increase in size in each of the next few years. Given the massive scale of the price tag, it will be nice to see some extra numbers to assess the metaverse's progress.

Zuckerberg and company said FRL won't be profitable anytime soon. Nevertheless, they think the metaverse will become the successor to the mobile internet one day. Therefore, they are focused on getting the right products in place to get people and businesses introduced to the whole idea. Facebook thinks it can get 1 billion people using VR by the end of the decade, at which time it could generate many billions of dollars in annual revenue.

Facebook has presumably been reporting the progress of FRL in non-advertising "other revenue" up to this point, but included in that catch-all segment are other things like commerce marketplace and digital payments income (remember, Facebook has aspirations in the cryptocurrency world, too).

Nevertheless, "other revenue" does offer an opaque glimpse into what FRL is already accomplishing. When FRL the stand-alone line item makes its debut in Q4 2021, management said to expect revenue to be down year over year because of the strong launch of the Oculus Quest 2 VR headset last October. But if non-ad other revenue is any indicator, Facebook's AR/VR is already generating some big numbers.

Clearly, a lot of people have already given Facebook's AR/VR products a spin, including businesses that are using the platform for things like employee training and efficiency gains. But Facebook is on a roll here and thinks the metaverse will be far larger than it is now in a decade. Be ready for some added clarity on what's going on at Facebook Reality Labs when the company reports on the final quarter of 2021.