The exponential growth potential for some stocks is simply too hard to ignore. And resist.

Investing in stocks is one thing; owning growth stocks is another. There's the excitement of owning shares in a company that are already racing ahead of peers in terms of sales or earnings growth, or are big bets on megatrends, or could even just be starting off with products or services that look so promising that the market is already willing to pay a high price for the stock. Then there's the thrill of watching these growth stocks grow, often into multibaggers that can earn you a fortune.

If the idea of earning so much wealth excites you, here are three growth stocks -- one riding a huge megatrend, another growing its sales exponentially, and the third starting off in a red-hot industry -- that could make huge leaps in the coming decade.

Shopify (SHOP -2.30%) has become unstoppable. The stock popped to 52-week highs on Nov. 19 in anticipation of strong growth for the e-commerce company during the upcoming holiday sales.

Shopify gave out a truly impressive statistic in its third-quarter earnings report that also reflects the company's heady growth. "It took 15 years for our merchants to get to $200 billion in cumulative GMV, and just 16 months to double that to $400 billion," said Shopify's president, Harley Finkelstein. 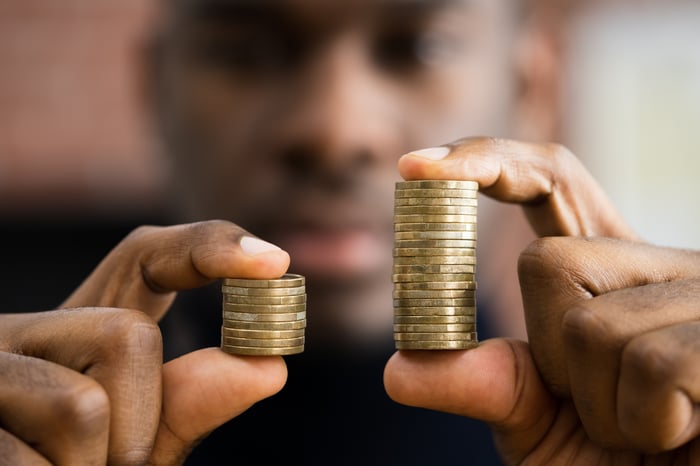 Primarily targeting entrepreneurs and small businesses, Shopify helps them set up customized online shops on its platform with complete management, right from creating a catalogue to shipping. Most importantly, it's a multichannel platform that includes nearly every social media and payments platform one could think of, which is hugely appealing to merchants as it makes marketing, sales, and payments much easier.

Based on its gross merchandise value, Shopify cornered 8.6% of the U.S. retail e-commerce market, second only to Amazon. That also means there's a huge addressable market for Shopify to target. The best part is that Shopify continues to roll out new products and services to attract and retain merchants on its platform. So for example, Shopify is now tapping cross-border commerce, rolling out a money management product, expanding its shipping services outside the U.S., and investing in its loans business, which is already growing rapidly.

Shopify's revenue jumped 46% in Q3 to $1.1 billion and its merchant count crossed an astounding 1.7 million. With peak sales season coming up, the company is well on track to deliver a big record year after generating $2.9 billion in revenue in 2020. The point to note is that 2021 could soon be just another record year – Shopify is hungry for growth, and as it grows and closes in on Amazon while riding the e-commerce megatrend, it could continue to create new records for years to come.

Teladoc Health (TDOC -0.77%) shares have lost almost 12% in just the past week as of this writing, and that's mainly because this virtual care titan sees its revenue growing at a compound annual rate of only 25%-30% through 2024. Disappointed? Put another way, Teladoc expects to double its revenue in just three years. That suddenly doesn't look as bad, right?

Granted, even that growth projection is significantly below the company's growth rate so far since 2018. Yet let's not forget that Teladoc's big-ticket $18.5 billion Livongo acquisition in late 2020 is the biggest reason it's expecting to grow revenue by almost 85% this year. Teladoc could very well make similar, if not as big, growth moves in the coming years, and that's not factored into its revenue outlook.

And, if a company can double revenue in three years, one can only imagine where it might be in 10 years. Growth prospects are huge, given Teladoc's global leadership in virtual care with services spanning primary telehealth like virtual consultations to mental healthcare and management of chronic diseases like diabetes. Teladoc foresees highest revenue growth -- of around 30% to 40% CAGR -- in mental healthcare through 2024.

Teladoc estimates the size of its total addressable market in the U.S. alone to be around $260 billion. The company sells directly to large employers, has distribution agreements, and is now expanding partnerships with health plan carriers like CVS Aetna and CVS Health. With the global virtual care market projected to grow by double digits in the coming years, Teladoc Health looks primed to be a multibagger stock in the coming decade.

Everyone's talking about this electric car stock for a reason

Lucid Group (LCID 0.33%) is the boldest call I'm making today. While the electric vehicle (EV) maker has made heads turn for all the right reasons so far, it'll have to work even harder to prove itself in the wake potentially intensifying competition in the EV industry in coming decade.

Yet, going by Lucid's history, the company could continue to surprise; and as and if it does, Lucid shares could catapult to new highs.

Perhaps Lucid's biggest competitive advantage from an industry perspective is management -- it has Tesla's (TSLA 1.12%) ex-chief engineer of Model S, Peter Rawlinson at its helm. Rawlinson started off wanting to build electric cars that would beat Tesla, and he has had some success so far. Lucid Air Dream Edition was accredited with a range rating of 520 miles by the Environmental Protection Agency (EPA), more than 100 miles higher than Tesla's Model S. Lucid Air also recently won the coveted automotive industry award, MotorTrend Car of the Year.

Of course, Lucid is nowhere close to Tesla's scale, size, and reach, it has pricier cars than Teslas, and it has only just started delivering its first car, the Dream Edition, priced at $169,000 per unit. Yet, Lucid had received reservations for more than 17,000 cars across all four models by Nov. 15 and plans to manufacture 20,000 cars in 2022. Looking farther out, here are some of Lucid's most notable future plans:

So after North America, Lucid will target China -- the world's largest EV market – and Saudi Arabia – its second-largest market in terms of preorders. Eventually, Lucid wants to build cars for the masses. Or as Rawlinson revealed during his latest interview with the New York Times, "I'm not here to sell ultra-luxury cars. I want to mass-industrialize electric cars." Now cornering the masses looks like a compelling strategy to get a foothold in an industry that could grow exponentially, and that's just one of the reasons Lucid could be an absolute winner in the long run.