Lucid made its biggest move yet in October, and is preparing for another big event on Nov. 15.

Electric vehicle (EV) stocks have been all over the news in recent weeks, but Lucid Group (LCID 0.73%) stumped everyone with the kind of attention it received: Its shares surged a whopping 45.7% October, according to data provided by S&P Global Market Intelligence, with all of those gains coming in just the last week of October. For those who thought the stock was hyped and primed to reverse course, Lucid is up another 13% so far in November.

Lucid first caught the market's attention at the end of September when it announced the start of commercial production and said it was ready to deliver its first cars, the Lucid Air Dream Edition sedan, by the end of October. With the Air Dream's range rating beating Tesla's (TSLA 3.27%) longest-range EV, the Model S, by nearly 100 miles, EV enthusiasts had a lot to look forward to. 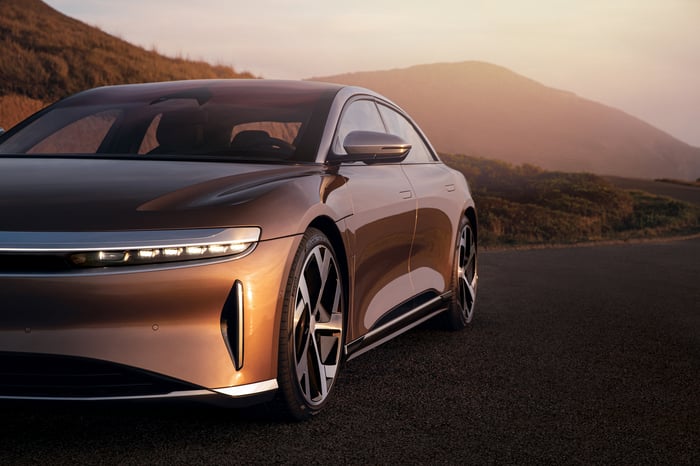 On Oct. 27, Lucid confirmed it would deliver the first batch of the Dream Edition on Oct. 30 at an event in California. CEO Peter Rawlinson also revealed his plans for Saudi Arabia the very next day, saying that he dreams of selling EVs priced as low as $70,000 in that country, which is already Lucid's second-largest market in terms of pre-orders.

Lucid is backed by Saudi Arabia, with the country's sovereign wealth fund, the Public Investment Fund, owning a 62.9% stake in the company.

The enthusiasm for Lucid shares hasn't waned thanks to glorious reviews coming in for the Air Dream Edition so far. The Wall Street Journal called the Lucid Air a "worthy Tesla opponent," and Motor Trend said it's the "most compelling American luxury car in recent memory."

Lucid also just opened a new studio at Tysons Corner Center near Washington, D.C., taking a leaf out of Tesla's playbook to display its cars at malls and shopping centers.

The stock should continue to hit the headlines, what with Lucid about to release its third-quarter numbers on Nov. 15, which will also be its first such detailed quarterly earnings report. The EV maker did file a quarterly report in August, but it didn't provide much information as the company went public only at the end of July. This is one earnings report the EV industry will be watching very closely.