Citi analyst Christopher Danely said the pricing correction in the DRAM market was "drawing to a close" as the PC and server markets stabilized and expanded. As such, he expects Micron to benefit from "more positive catalysts" in the coming months and maintains a "buy" rating with a price target of $120 -- more than 40% above its current price.

Evercore ISI analyst C.J. Muse also added Micron to his firm's "top picks" list. Muse believes Micron's earnings will start improving in its February or May quarters as it resolves its supply chain shortages, and that DRAM prices will rebound in the first or second calendar quarters of 2021. Muse maintained his "outperform" rating, with a price target of $100 for the stock. 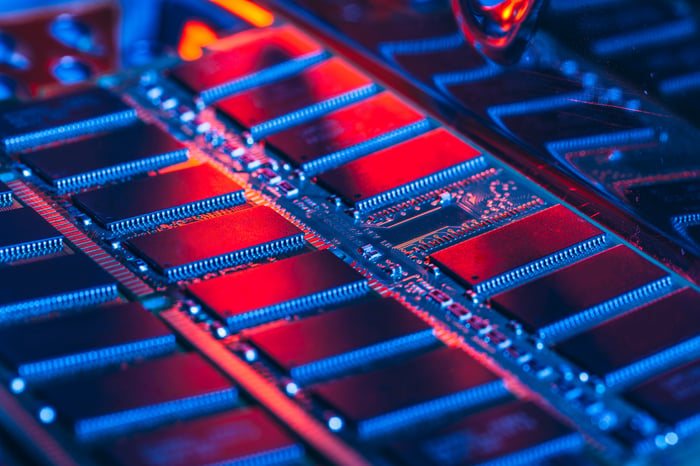 Those two upgrades turned Micron into one of the most talked-about stocks on Reddit's WallStreetBets subreddit, according to Quiver Quantitative. Investors should always take analysts' upgrades with a grain of salt, but does the market's renewed interest in Micron make it a compelling buy?

Micron suffered a major slowdown in 2019 and the first half of 2020 as its previous growth cycle ended with a global glut of DRAM and NAND chips. As a result, its revenue fell year-over-year for six straight quarters before finally returning to growth in the third quarter of fiscal 2020. After bottoming out, Micron's revenue growth consistently accelerated as its margins expanded:

That recovery was buoyed by rebounding DRAM and NAND prices, which rose as stay-at-home trends throughout the pandemic boosted sales of new memory chips for data centers, PCs, and gaming consoles.

However, Micron expects its revenue to rise just 33% year over year in the first quarter of 2022, which broadly missed expectations for 47% growth, and for its adjusted gross margin to decline sequentially to 47%.

Micron attributed that slight deceleration to two challenges. First, the global chip shortage is curbing shipments of other PC chips (including CPUs and GPUs) and indirectly reducing sales of new memory chips for PCs. Second, Micron faces new supply chain constraints for some of its own IC components, and those shortages are throttling its near-term bit shipments.

Micron didn't say it was facing a new cyclical slowdown yet, but Gartner and Trendforce both expect prices for DRAM chips -- which accounted for 72% of Micron's revenue in fiscal 2021 -- to decline in 2022.

Those gloomy forecasts are both based on the notion that a global glut will occur again as Samsung, the world's top DRAM and NAND maker, aggressively ramps up its production capabilities again. But in his latest note to investors, Evercore's C.J. Muse said that Samsung "frankly cannot" ramp up its production right now amid the current supply constraints.

Why Micron is still a compelling investment

Micron's stock has risen more than 30% over the past 12 months, but it's consistently underperformed the PHLX Semiconductor Index and trades at just nine times forward earnings. That low price-to-earnings ratio (along with the overblown fears of a cyclical slowdown) makes Micron a compelling semiconductor play that could still have plenty of room to run next year.