ASML, UMC, and Micron could all still have a lot of upside potential.

The global chip shortage has been generating strong tailwinds for the semiconductor sector over the past year. However, it might be difficult for investors to separate the winners from the losers if they don't understand how the semiconductor supply chain works.

Today, I'll highlight three chip stocks that operate in very different parts of the semiconductor market, why they're all growing, and why they could still generate even bigger returns next year. 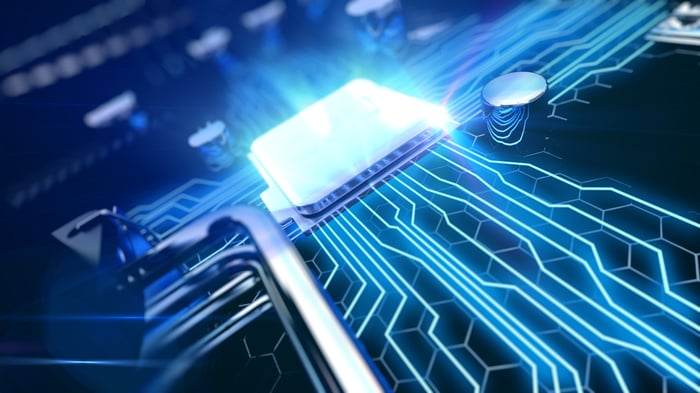 The world's most advanced chip foundries -- including Taiwan Semiconductor Manufacturing (TSM -2.06%), Samsung, and Intel (INTC 0.43%) -- all use ASML's EUV machines, which cost about $150 million, each and require several planes to ship. ASML's dominance of this crucial chipmaking technology, which it refined over the past three decades, makes it a linchpin of the global semiconductor market.

ASML's stock price has more than doubled over the past 12 months, and it isn't cheap at 45 times forward earnings. However, this stock could still have plenty of upside potential as the chip shortage drags on -- since it will be impossible to resolve the crisis without buying significantly more machines from ASML.

ASML's top client is TSMC, the world's largest contract chipmaker and another linchpin of the semiconductor market. However, TSMC's smaller rival United Microelectronics (UMC -2.44%) is a more underrated play on the same trend.

Unlike TSMC -- which manufactures the world's smallest chips for fabless chipmakers like Advanced Micro Devices and Apple -- UMC primarily manufactures older, larger, and cheaper chips for cars, Internet of Things (IoT) devices, and other gadgets.

These chips aren't as powerful as TSMC's top-tier chips, but they're arguably just as essential. UMC's plants are already operating at their maximum capacities, but the company faces less pressure to aggressively upgrade its plants than TSMC, Samsung, or Intel, which are all engaged in the costly "process race" to manufacture smaller and more advanced chips.

UMC ranks a distant third in the foundry market behind TSMC and Samsung, but it still generates impressive growth: Its revenue rose 4% in 2019 and jumped 25% in 2020, and analysts expect 18% growth this year.

UMC's stock has more than doubled over the past 12 months, but it still looks reasonably valued at 22 times forward earnings. Like ASML, UMC will continue to profit from the chip shortage. Moreover, the traffic jam at TSMC and other top foundries could eventually divert more lower-end orders to UMC.

Lastly, I believe Micron Technology (MU -1.20%) -- one of the world's leading producers of DRAM and NAND memory chips -- is currently undervalued at eight times forward earnings. Micron's stock has risen nearly 30% over the past 12 months, but it's stalled out in recent months amid fears of a cyclical slowdown.

Micron's revenue fell 8% in fiscal 2020 (which ended last September) as a global glut of memory chips caused market prices to plunge. But in fiscal 2021, its revenue rose 29% as those supplies and prices stabilized.

Micron wasn't directly affected by the chip shortage, since it manufactures its own chips instead of outsourcing them to third-party foundries. However, it expects shortages of other PC components -- including CPUs and GPUs -- to indirectly curb the market's near-term demand for its memory chips. That warning, along with a softer-than-expected forecast for the first quarter, spooked investors last month.

Nonetheless, analysts still expect Micron's revenue and earnings to rise 15% and 44%, respectively, this year, as it benefits from the secular expansion of the gaming, data center, cloud, 5G, and automotive markets. Those catalysts might also spark a "super cycle" in memory chip upgrades, which could last much longer than previous cycles and propel Micron's stock to fresh highs next year.