Micron Technology's (MU -3.65%) stock lost more than a quarter of its value over the past six months as investors fretted over a potential supply glut of memory chips. Its fourth-quarter report, released on Sept. 28, beat analysts' expectations on the top and bottom lines, but its stock still slipped after it offered weak guidance for the first quarter.

Micron's stock remains up more than 40% over the past 12 months, but it's becoming a battleground stock. The bulls claim Micron's stock is still cheap and that the company will still benefit from the secular growth of many chip-hungry sectors, while the bears point out that Micron's gross margins are under pressure and its growth has always been cyclical. Let's see which argument makes more sense. 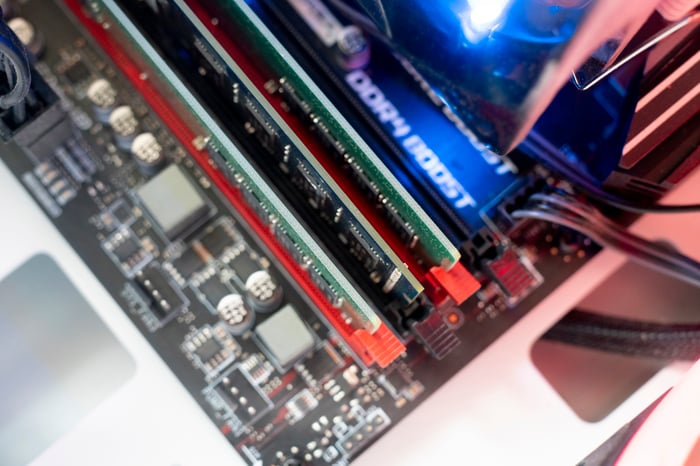 Micron's revenue declined year over year for six consecutive quarters throughout 2019 and 2020, mainly due to a global glut of DRAM and NAND chips, before returning to growth in the third quarter of 2020. Its revenue growth then accelerated throughout 2021 as its non-GAAP gross and operating margins expanded.

Lastly, Micron established a technological lead against its rivals with its 1-alpha DRAM and 176-layer NAND nodes, which are currently the most advanced high-volume production nodes for their respective markets. Those high-end nodes widened Micron's moat against Samsung, SK Hynix, Western Digital, and Kioxia in the crowded memory chip market.

Has the cycle peaked again?

Micron's growth in 2021 looks impressive, but Gartner expects DRAM and NAND prices to decline sharply in the second half of 2022. Trendforce expects DRAM prices to start tumbling sequentially in the fourth quarter of calendar 2021, and continue dropping throughout 2022.

Those bearish expectations raise red flags for Micron, which generated 72% of its revenue from DRAM chips and 25% from NAND chips in fiscal 2021.

Micron's first-quarter forecast indicates that slowdown is already underway. It expects its revenue to rise 33% year over year, which marks a slowdown from its fourth quarter and misses analysts' expectations for 47% growth.

It expects its non-GAAP gross margin to decline about 90 basis points sequentially (but still rise year over- ear) to 47%, and for its non-GAAP earnings to rise about 169%, compared to expectations for 218% growth.

Micron hasn't been severely affected by the chip shortage yet, since it manufactures its chips at its own foundries instead of outsourcing them to contract chipmakers. However, it still expects shortages of other PC components -- such as CPUs and GPUs -- to curb the market's near-term demand for DRAM and NAND chips.

Micron is also starting to experience supply chain constraints related to certain IC components that are exposed to the global chip shortage, and it expects those constraints to further throttle its near-term bit shipments.

The expectations vs. the valuations

Micron didn't provide any exact guidance for fiscal 2022, but CEO Sanjay Mehrotra predicted it would still generate "record revenue with solid profitability" for the year amid healthy demand from the data center, server, automotive, and 5G markets.

Investors seem reluctant to pay higher premiums for either stock because they dread a major supply glut in the second half of 2022 -- which could strike just as Micron resolves its near-term supply chain challenges. If that happens, Wall Street's estimates for Micron might be far too optimistic.

Micron is still worth buying

Micron's growth will decelerate this year against tough comparisons, but I believe the secular expansion of the 5G, automotive, and industrial Internet of Things markets will prevent memory prices from crashing. Therefore, I believe Micron's stock is still too cheap to ignore, and investors who buy some shares as the market frets over its near-term headwinds could still reap some impressive gains by the end of 2022.