AT&T (NYSE:T) Mobility CEO Jeff McElfresh threw some water on the blazing hot postpaid wireless industry at a recent investors conference. He said he expects a slowdown in subscriber additions across the industry next year as it laps significant tailwinds such as stimulus checks.

With fewer net additions on the table, AT&T and its rivals Verizon (NYSE:VZ) and T-Mobile (NASDAQ:TMUS) will have to focus on reducing subscriber churn and increasing average revenue per user (ARPU). 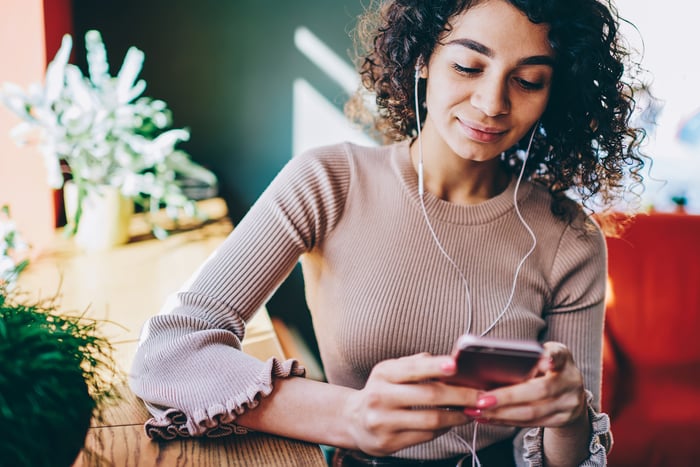 Through the first nine months of 2021, the big three wireless carriers have seen double the number of postpaid phone net additions compared to the same period of 2020. The group added over 2 million new subscribers in the third quarter alone.

Beyond the big three carriers, customers also continue to sign up for the cable companies' phone services at a strong rate. Comcast and Charter have added a combined 1.7 million subscribers in 2021 versus 1.5 million in the same period last year.

But analyst Craig Moffett pointed out during T-Mobile's third-quarter earnings call last month that third-quarter subscriber growth was about seven times the population growth of the United States. While customers shifting from prepaid to postpaid, adding more second lines for themselves, or adding kids' lines at earlier ages may account for some growth, that rate is practically unsustainable.

In order to keep growing their wireless businesses in a low-subscriber-growth environment, the carriers will have to win subscribers from one another, more so than in the previous year. One metric to keep an eye on as an investor, then, is subscriber churn. If a carrier isn't losing many subscribers every month, it doesn't have to take as many subscribers away from the competition in order to grow.

To that end, AT&T and T-Mobile have fared better than Verizon at keeping postpaid phone subscriber churn at the low levels seen in 2020. And that's shown up in their net subscriber additions, which handily outpace Verizon's this year.

McElfresh is confident AT&T can maintain its low churn rates in 2022, noting it's providing a higher level of customer service than it's historically done in the past. He monitors the brand's net promoter score to predict churn, and he said it's trending well.

Meanwhile, T-Mobile is working to move legacy Sprint customers over to the T-Mobile network, and it's years ahead of Ma Bell and Big Red on its 5G build-out. As more customers look to move to 5G, T-Mobile stands at a strong advantage.

Verizon is used to offering the best network, and charging a premium price for that higher-quality service. But heading into 2022, it's not worth the premium price it charges. Its network is inferior to AT&T, and its pricing is inferior to the cable companies that also use Verizon's network. That's going to make it difficult for it to hold onto customers.

To that end, T-Mobile has been incentivizing customers to upgrade their plans by limiting some device promotions to its high-end service plan. Half of its new customers are taking the top-tier Magenta MAX plan, according to CEO Mike Sievert. And while T-Mobile is seeing strong momentum in getting retail subscribers to move up to its higher-priced plan, it also expects a large amount of growth from lower ARPU enterprise and government subscribers. Still, management expects a relatively flat ARPU in 2022.

AT&T sees potential growth for its high-end plan as well. McElfresh points out that just 20% of subscribers are on its top-tier plan, so there's a lot of opportunity to upgrade. Likewise, he expects ARPU to remain flat in 2022.

Verizon has managed to grow its revenue per account in 2021, but its growth rate is more limited. Not only is it facing pricing pressure from the competition, as mentioned, it also says more than 30% of its subscribers are already on its premium plan. Verizon has done a good job of upselling device protection plans, though, increasing revenue per user.

Not everyone can be a winner

2022 is going to be a tough year for wireless carriers. The telecom industry will suffer a hangover from the stellar growth it saw this year, and the competition to win subscribers will put pressure on all three major carriers to drive down prices and increase promotions. Verizon looks poorly positioned, and T-Mobile looks best suited to keep growing. While all the stocks look priced appropriately for their potential growth, T-Mobile's network lead and subscriber growth catalysts add up to make it the most attractive option for investors looking to pick up a telecom stock.