Rivian (NASDAQ:RIVN) made stock market history when its valuation topped $100 billion just days after its IPO. While that alone makes it one of the richest debuts ever, what's truly unique about the electric vehicle specialist is that the company has no material revenue to speak of.

Though Rivian bulls are excited by Amazon's order for 100,000 delivery vans from the company, it had only delivered a handful of R1Ts, a passenger pickup truck and its first production vehicle, as of the end of the third quarter. With production and deliveries just starting to ramp up, Rivian's valuation north of $100 billion requires a leap of faith from investors.

In fact, to justify that figure, you have to make three key assumptions. 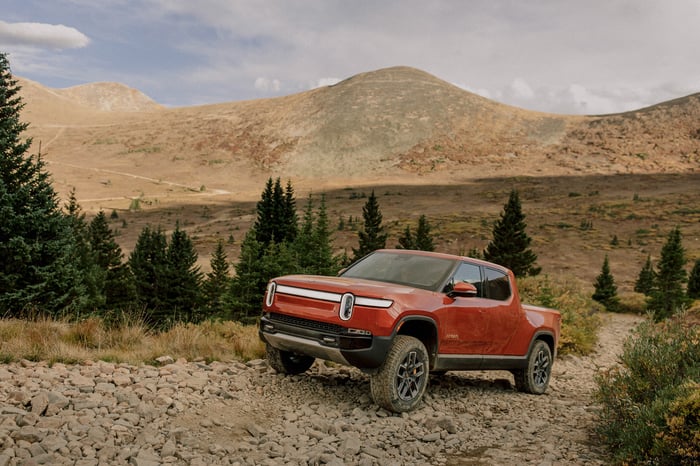 1. Rivian will be more than just an automaker

Electric vehicle stocks -- including Tesla (Nasdaq: TSLA), Lucid, and Nio -- have scored rich valuations almost across the board, a sign that investors think that the EV sector will be much more profitable than the traditional auto sector is.

For instance, Rivian's current valuation is higher than both General Motors' (NYSE:GM) and Ford Motor Company's (NYSE:F) even though those companies combined have generated net income of roughly $14 billion over the last four quarters and have their own electric vehicles in production and development. Buying Rivian stock at this point then is a bet that the company will be more than just an automaker. After all, there's no reason to believe that electric vehicles will be significantly more profitable than gas-powered ones, especially as the industry is shaping up to be just as competitive.

Unless Rivian will make significantly more than the $11 billion in profit GM has made in the last four quarters, there's no reason why an automaker with no current revenue would be worth more than GM or Ford is today.

A central tenet of finance is that a dollar today is worth more than a dollar tomorrow. Money has value that diminishes as time passes. Because of inflation and the fact that you can spend a dollar that you have today while you can't do that with your dollar tomorrow, money in the future is naturally worth less than money in the present.

This concept gets applied to stock valuations through the discounted cash flow model, which values future cash flows less, based on a given discount rate, the further we look into the future. In other words, Rivian's future profits are worth less than current profits are for a company like GM or Ford.

CEO R.J. Scaringe has said he expects the company to be producing 1 million vehicles by 2030, which would be an impressive feat for a new automaker, though still much less than GM's and Ford's annual production of 7 million and 4 million, respectively.

Let's assume a best-case scenario in which Rivian hits that mark and sells 1 million vehicles. Say they have a $50,000 average selling price and a net profit margin of 10%, which would give the company $5 billion in net income by 2030. That sounds like enough to justify a valuation of $100 billion today, but using a modest discount rate of 5%, that $5 billion would be worth just $3 billion.

In other words, most of the profits that Rivian investors are banking on are worth not much more than half of what they would be worth if Rivian was earning them today.

3. There's a good chance it will be another Tesla

One reason why EV stock valuations have become so inflated is the success of Tesla, which towers over all other auto stocks with a market cap of more than $1 trillion.

While Tesla has plenty of detractors, and there's certainly an argument that its valuation is stretched, there's also a clear logic to its price tag. The company is the first mover in electric vehicles and it has a long track record of executing on its strategic plan and growing rapidly. Tesla also has a number of evident competitive advantages, including its network of superchargers, software that allows for over-the-air updates, and a brand and a CEO with a cult-like followings. Additionally, the company has been developing its own autonomous vehicle technology, and a breakthrough on that front would revolutionize the auto industry.

Rivian doesn't have any of those advantages at this point, and while it could down the road, it seems generous to assume that. It's also worth remembering that Tesla's market cap didn't cross the $100 billion mark until 2020, when it produced more than 500,000 vehicles. At this point, there's no real evidence that Rivian will be the next Tesla. It's just speculation.

Rivian has deep pockets following an IPO that raised roughly $10 billion, and the company has an impressive lineup of backers, including Amazon, which will become its biggest customer. But the company's current valuation makes unreasonable assumptions about its future profits, especially when its product is untested and unproven in the eyes of consumers.

If Rivian executes perfectly, the stock could turn out to be a winner, but it seems much more likely that investors are overpaying for a company that looks like one of many new entrants jockeying for position in an increasingly crowded electric vehicle market. With that in mind, you're better off taking a pass on this hot IPO.