A couple of weeks back, rumors began circulating that famous (or infamous, depending on your position) activist investor Carl Icahn had plans to push for Chesapeake Energy (OTC:CHKA.Q) to be sold, with buyers like ExxonMobil and British Petroleum named as possible suitors. So while I'm still of the opinion that none of the suitors named makes much sense, the question remains: Should Chesapeake Energy put itself up for sale? Would this be in the best interest of shareholders? Let's take a look, and also talk about why companies like Clean Energy Fuels (NASDAQ:CLNE) and Cheniere Energy (NYSEMKT:LNG) matter.

Turnaround complete
Last week's earnings announcement seems to have disappointed the market. Shares are down about 6% since the earnings release, but despite the sell-off 2013 was a fantastic year by most measures:

CEO Doug Lawler and a refreshed board have turned Chesapeake around. Source: Chesapeake Energy

Looking ahead
Chesapeake is in much better shape than when CEO Doug Lawler took over less than one year ago. The company has already sold -- or is in the process of selling -- another $1 billion in non-core assets to further return Chesapeake to its core E&P focus. In a nutshell, Chesapeake is not only leaner and more efficient, but the improved cost structure means a more nimble company that's both able to allocate capital in more profitable ways, and respond more quickly to opportunities for expansion within the core business.

Chesapeake's decision to sell itself (assuming that a buyer even shows up) should really boil down to one thing: Shareholder return.

If the rumored $40 per share price tag could be attained, we're talking about a 54% premium over today's share price. Frankly, if management could attain that, it would be a disservice to not do a deal. It may be a far cry from the $67 we saw before the market crash in 2008, but there was a lot of uncontrollable baked in that price, like natural gas prices more than double today's rate, and a general consensus in the industry that gas prices would stay high because of limited resources. Today's supply picture is vastly changed from 2008, so anyone hanging onto $67 shares should accept that reality.

However, things happening at Clean Energy and Cheniere give us a picture of what bodes well for Chesapeake's future.

Driving the future
Clean Energy Fuels' stock has been punished even more in recent months, and just as much going back to 2008: 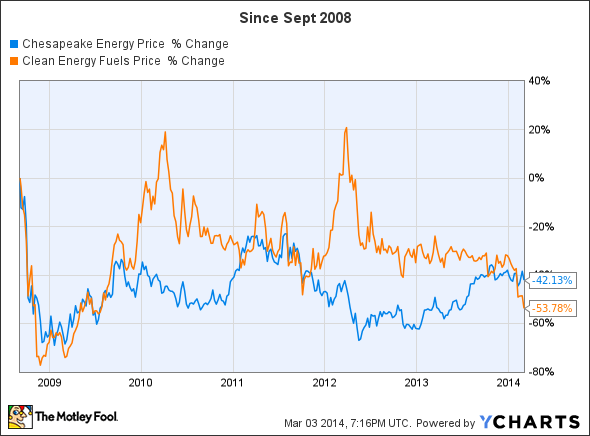 While Clean Energy's share price actually rose on two later occasions, shareholders have largely been punished. The thing is, most of this is a product of the company's huge investments in building out infrastructure to support the next phase of the company's growth story: a massive network to refuel the heavy duty trucks that transport -- at some point -- almost every single good in North America.

The share price has been punished as a result of both slow growth in demand -- at least so far -- for LNG for truckers, as well as growing debt (and debt expense) due to the slow adoption of natural gas for trucking. In all fairness, this has been a product of a number of factors, some of which have been largely out of Clean Energy Fuels' control, like engine availability. The good news is Cummins and Westport Innovations' joint venture's ISX12 G engine launched in 2013, and has seen a lot of positive feedback. With large fleets now testing this engine, 2014 looks like a year of inflection for truckers and natural gas.

Global demand will drive domestic production
Cheniere's huge export facility in Sabine Pass, LA, actually started off its life as an import facility, largely due to the same events that led to Chesapeake hitting $67 per share in 2008: high domestic natural gas prices driven by limited domestic supply. Founder and CEO Sharif Souki has done a tremendous job positioning Cheniere to be a beneficiary of the massive domestic supplies that have been discovered since. The Sabine Pass facility is scheduled to begin liquefaction and export next year, and will be the first of its kind in the continental United States.

The U.S' supply of natural gas will help fill growing global demand. Add in that much of the world's supply is under the control of countries whose political and human rights positions may not mesh with those of consumers -- take the recent events in Ukraine and Russia, for example -- and importing countries like those in Europe will be prime customers for American natural gas, produced by companies like Chesapeake and exported by Cheniere.

Final thoughts: Why does it matter to Chesapeake?
In a number, 25 billion. That's the number of gallons of diesel that class 8 trucks consume every year in North America. Think about it this way: Chesapeake's 2013 oil-equivalent production was 237 million barrels of oil, which would produce about 2.3 billion gallons of diesel. Simply put, the fuel market for class 8 trucks alone is more than ten times greater than Chesapeake's entire crude oil output. 80% of Chesapeake's actual production is natural gas. Today, actual consumption of natural gas by class 8 trucks is less than 1%, though it's expected to grow to as much as 2% in 2014 -- an increase of as much as 400 million gallons in 2014 alone.

On the export side, the global market is enormous, but technology has limited access for domestic producers. However, capabilities to liquefy and export massive amounts from terminals like Sabine Pass are changing the game, and opening new markets. 2014 will be an inflection point for trucking, and 2015 could be that same point for exports. A more disciplined, leaner Chesapeake is well-positioned to benefit from new demand, and reward shareholders.

If a buyer is willing to pay $40 today, that's a great deal for investors. However, don't invest on that speculation. Invest because Chesapeake is well-positioned for the future.