Please ensure Javascript is enabled for purposes of website accessibility
Log In Help Join The Motley Fool
Free Article Join Over 1 Million Premium Members And Get More In-Depth Stock Guidance and Research
By Jason Hall – Feb 16, 2014 at 10:04AM

Rumors are out that Carl Icahn has plans to force Chesapeake Energy to find a buyer for the whole operation. After announcing that he will end his pursuit of pushing Apple to increase its share buyback plan, has he turned his attention to the still-recovering natural gas producer?

Carl Icahn is a name that strikes fear (or at least angst) in the hearts of corporate managers. His extensive history as a corporate raider and activist shareholder is long, and in large part he has been effective at forcing change at companies, and often -- at least in the short term -- to the benefit of investors. With his recent proxy fight with Apple now over, there are rumors that he's pointing his aim squarely at Chesapeake Energy (CHKA.Q). Considering his track record, and the fact that his Icahn Enerprises, L.P. (IEP -0.32%) owns 10% of Chesapeake's stock, what should investors do?

Who's gonna buy?
Of the rumored buyers, including ExxonMobil (XOM 0.67%), British Petroleum (BP 1.67%), and Royal Dutch Shell (RDS.A), it's probably reasonable to go ahead and cross ExxonMobil off the list. After all, we are only a few years removed from the company's $30+ billion purchase of XTO Energy, which made ExxonMobil the largest natural gas producer in the U.S. Frankly, paying a premium for the second largest producer is not very likely, especially considering that the acquisition of XTO has yielded mixed results so far. Additionally, ExxonMobil's management is typically very conservative with capital allocation, and it's hard to see significant upside in acquiring Chesapeake for the company.

Shell is another company that seems unlikely to make a major purchase right now. One only has to go as far as a very recent statement by new Shell CEO Ben van Beurden:

Our ambitious growth drive in recent years has yielded a step change in Shell's portfolio and options, with more growth to come, but at the same time we have lost some momentum in operational delivery, and we can sharpen up in a number of areas. Our overall strategy remains robust, but 2014 will be a year where we are changing emphasis, to improve our returns and cash flow performance.

Spending $26 billion (based on the rumored premium Icahn is looking for) isn't a good way to improve cash flow performance in the short-term. And if that quote isn't enough, van Beurden highlighted the following in Shell's press release: "Enhancing capital efficiency, with hard choices on new projects, reduced growth investment, and more asset sales." It would be pretty hard for van Beurden to backtrack from that statement, and potentially overpay for a company that's been struggling to do exactly what van Beurden is saying that he will do with Shell, in streamlining, selling off assets, and improving cash flow performance.

BP in the game?
Honestly, BP is probably the least  likely company to make a bid to buy Chesapeake. After all, CEO Bob Dudley has been working to similarly streamline and rightsize BP since taking over in 2010, essentially in the midst of the Deepwater Horizon disaster. In a video just over a week ago, Dudley had this to say:

In these times, we need to be more focused, more simple, more clear ... We've had the best exploration year in at least a decade ... Many good things happening within the company. We are going to live within the capital discipline that we said, we will probably keep our capital (spending) flat in 2014 versus 2013, between $24 billion and $25 billion.

Much like his counterpart at Shell, it doesn't sound like Dudley has any intention to spend a large amount of capital on a business that is still recovering itself from massive leveraged spending.

Focus on quality, not rumors
While he will probably remain an active and involved shareholder, investing in Chesapeake because of Icahn's stake isn't smart investing, because it ignores the fundamental step of looking at the business itself. After all, one of the board members, Vincent Intrieri, is a senior vice president of Icahn Enterprises and a close ally of Icahn.

With that said, it's more important to consider that Chesapeake -- the business -- has largely solidified under the leadership of CEO Doug Lawler over the past year. It's also worth noting that the path that Lawler is following, of selling off underutilized assets to reduce debt and return the company to long-term profitability, was largely established by the board of directors last year, meaning that Icahn's fingerprints are already on Chesapeake's current direction. And with both cash from operations and free cash flow steadily improving since bottoming out in the Spring of 2012, there's plenty of reason to consider investing in Chesapeake for the long term: 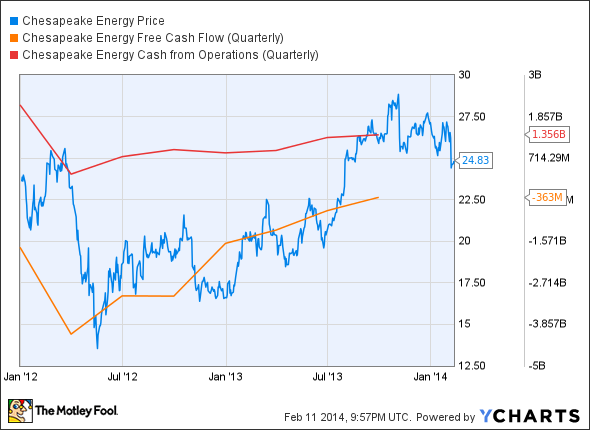 As long as this pattern continues, the market will eventually follow along and price shares accordingly. And that's all that Icahn, and investors in Icahn Enterprises, are looking for. If you're interested in Chesapeake, don't base your decision on what you think any of these companies may or may not do in regards to Chesapeake. Base your decision on the long-term potential of each as a stand-alone business.