After five years of growth, it might be worth your time to step back and assess the market's current rally against historical precedents.

The bull market that began on March 9, 2009 turned five this weekend. How did you celebrate? Did you buy more stocks? Did you count up your dividends? The major indices haven't been in a particularly jubilant mood since the bull turned five, as the Dow Jones Industrial Average ( ^DJI -1.72% ) and S&P 500 ( ^GSPC -1.67% ) both ended the first trading day of Year Five with small losses. But that doesn't mean the rally is over yet, as both indices remain within easy striking distance of new all-time highs.

It's harder than you might think for a rally to run five full years. Before this week, the Dow had recorded only five other five-year-plus bull markets, with two of those five periods ending within days of their fifth anniversary. All the current expansion needs to do to become the fourth-longest bull market in Dow history is to reach new highs at some point in April: 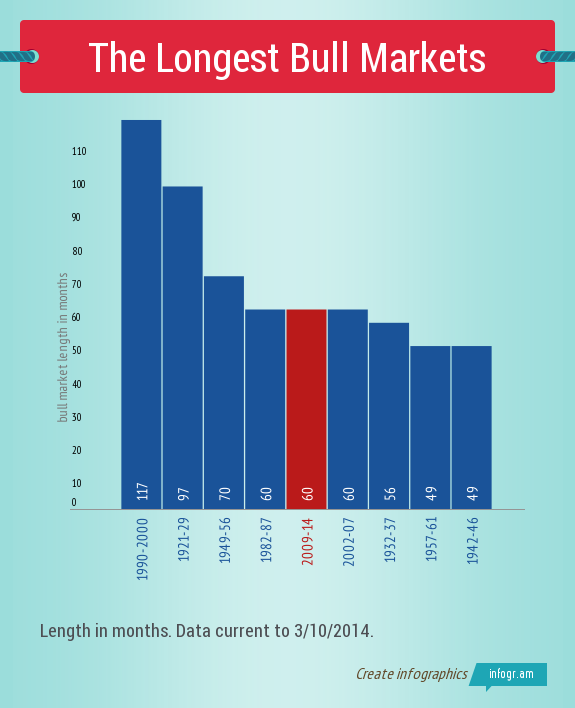 But length is one thing, and strength is another. How much did these five-year bull markets grow, both in nominal and real terms? To determine both measures, we have to turn to data gathered by Professor Robert Shiller on the historical S&P composite: 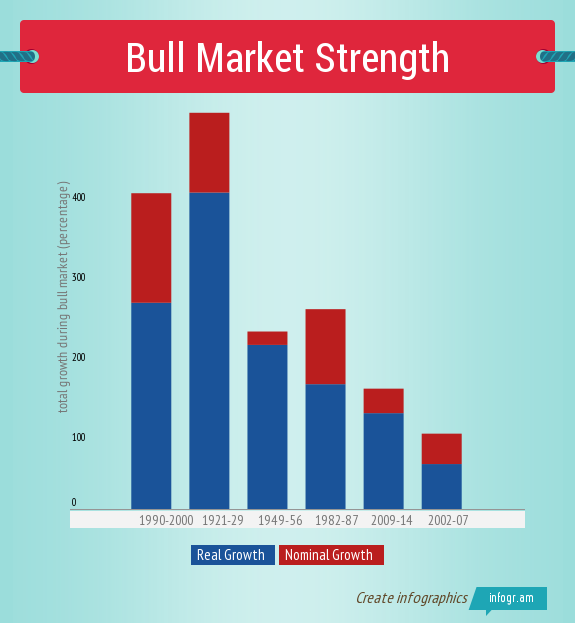 As you can see, the current expansion is still one of the weakest of the long-run bull markets, trailing all but the subprime bull market in not just total growth, but in total growth compared to the others' real growth. If this is going to be a legendary bull market, it's going to have to produce better returns before it's done.

We should at least give the current market a little slack, though. We can already see that it trails the Reagan-era bull market on an equal-time comparison, but how much did the other megabulls actually grow during their first five years? 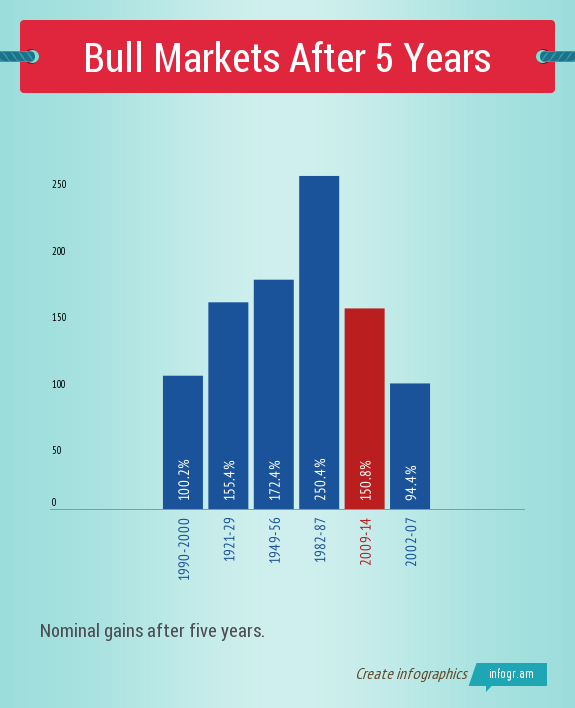 There is one other consideration to keep in mind, though: how much did marketwide valuations change during these bull market runs? To assess that, we turn again to Robert Shiller's S&P composite data for the cyclically adjusted P/E ratio, or CAPE: 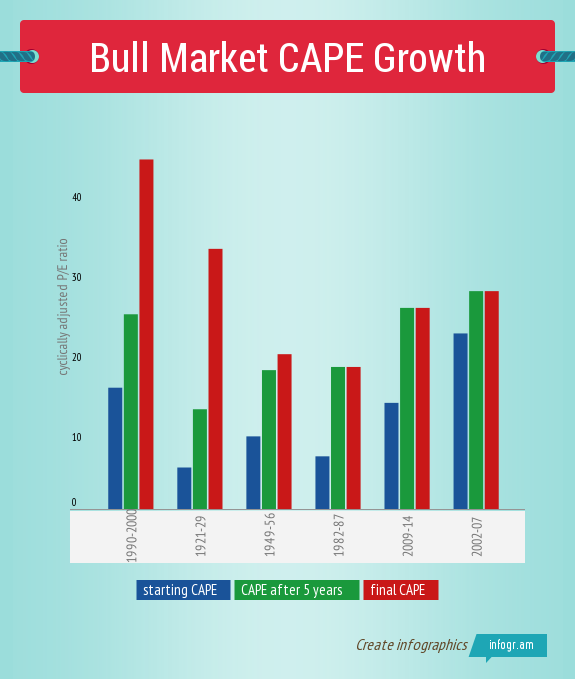 This final data point should be worth some concern, but it may not be as worrying as it might seem at first glance. I recently analyzed the ways CAPE has changed over time, both in terms of its baseline expectations and in terms of the way it's calculated, and found that while this metric may indicate some overvaluation, it's hardly as extreme as it might appear at first glance.

Modifying CAPE to use the same method of reported earnings as was used before 2001 (when a major change altered the way GAAP earnings are calculated) reduces the market's current CAPE to somewhere around 21, which is roughly in line with the CAPE valuations reached at the end of the Reagan-era and Truman-Eisenhower era bull markets. In fact, while the current bull market has seen its CAPE rise to rather high levels, its total CAPE growth -- currently holding at roughly 90% -- is well below growth of CAPE valuations seen in the first five years of the Roaring 20s (140% growth) and the Reagan years (175% growth). These bull markets began with much smaller initial CAPE valuations, to be sure, but more of their share-price growth was driven by investor optimism, in the form of valuation expansion, than we've seen during the current bull market.

History may still be against us, as there are only three longer-lasting bull markets than the one we find ourselves investing in today. But at the same time, it's important to consider that we may not want the current bull market to rampage on for too much longer without a correction -- the bulls of the 1920s and 1990s left scars on the investing landscape that took many years to heal, while shorter megabulls are more likely to represent only a temporary pause in a longer secular bull market, as was the case in 1987, 1956, and 1961.