The Dow's growth today bears eerie similarities to the first few years of the greatest bull market in American history. Will it last long enough to break the records of the Roaring '20s?

The last trading day of 2013 remains the high-water mark for the post-financial-crisis Dow Jones Industrial Average (^DJI -0.83%), which this year has fallen well below the 16,576.66 point it closed with on Dec. 31. If that proves to be the end of nearly five years of growth, it will still be one of the longest bull markets in the Dow's history.

But how does the current market stack up in history? To assess the strength of the current bull market -- including its recent swoon -- I took a look at all bull markets that lasted longer than 1,000 trading days, going all the way back to the bull market gold standard, the Roaring '20s. Because there were so many of them, I broke the analysis into two parts, the first comparing today's bull market to other markets of similar length, and the second assessing it against the longest and strongest bull markets ever seen: 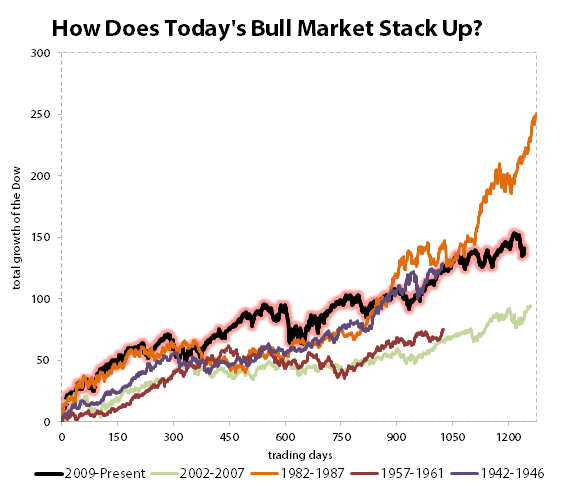 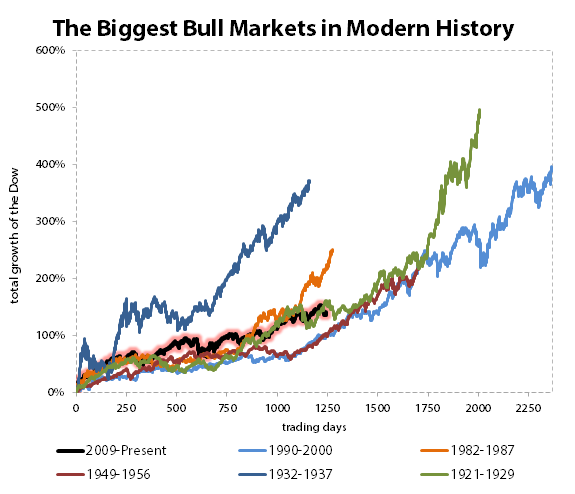 As you can see, there's nothing particularly unusual or remarkable about the Dow's current bull market. It's been stronger than the last bull market -- that's the one that led to the subprime implosion in 2008 -- since day one, but last year its gains began to trail those of the Reagan-era boom that ended (temporarily) in spectacular fashion with the Black Monday crash of 1987. It's stronger than the dot-com boom of the 1990s after the passage of a similar amount of time and has begun to neatly track the Dow's growth during the Roaring '20s. In fact, to date, the Roaring '20s bull market presents the most similar chart to our current bull market, especially over the past year: 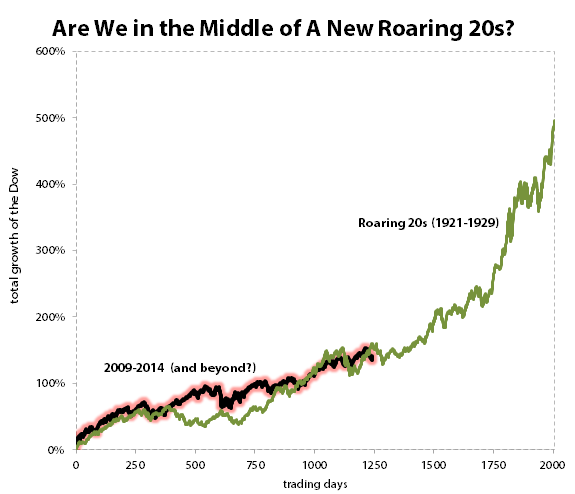 There are a few points for and against a continuation of the Dow's current bull market into a long-term historical growth pattern like that of the Roaring '20s. First, let's tick of some of the reasons why we might soon experience the greatest bull market of modern memory, besting even the gains of the dot-com era.

First, computers and the Internet are no longer "speculative," they dominate the global economy and are driven forward by trillions of dollars of business investment and development. The Roaring '20s also followed a boom in "speculative" investing, in automakers, which became dominant industrial companies despite their bubble popping in 1919. Second, millions -- or perhaps billions -- of people are now experiencing the middle-class lifestyle for the first time around the world, a phenomenon that took hold in the United States and in other industrial nations to a lesser extent following World War I. The combination of expanded purchasing power and the maturing of transformative technologies drove gains for much of the Roaring '20s, and it could do the same today.

On the other hand, the Roaring '20s were able to continue so long not necessarily because new tech took hold or because purchasing power expanded, but because financial innovation allowed for multiple bubbles to inflate well beyond the natural rate of economic expansion. While we could make the case that this could happen again, the global economy is still recovering from its last major episode of financial innovation. While markets can have short memories, the people now in charge of the global financial system have endured a trial by fire through the subprime crisis, and they're unlikely to go raving off the deep end of sanity so soon after nearly blowing the economy to smithereens.

The Roaring '20s also pushed the Dow higher for so long because the United States became a safe haven of sorts for the world's wealthy, many of whom found investing in war-ravaged Europe difficult due to the death of millions of the continent's able-bodied workers and prospective consumers. Today, the whole world is open to investment, and many developing nations now boast stronger manufacturing infrastructures -- and more well-developed national bases of technological expertise -- than America's trading partners did during the Roaring '20s. America was the world's producer during the Roaring '20s, but that's no longer true today.

Will the Dow set new records as it races into the second half of a decade-long boom, or was the end of 2013 truly the end of the bull market? We may not know for some time, but as markets have already recovered rapidly from January's losses -- we're less than 4% away from a new all-time high -- it seems quite possible that the bull market that began in 2009 still has some room to run.

Want to learn more about the Roaring '20s? Click here for a special two-part look at the unprecedented growth of the Dow and the American economy that began in 1921.