Please ensure Javascript is enabled for purposes of website accessibility
Log In Help Join The Motley Fool
Free Article Join Over 1 Million Premium Members And Get More In-Depth Stock Guidance and Research
By Alex Planes - Feb 25, 2013 at 8:18AM

A deep dive into some truly long-term bulls and bears.

Investing in a secular market can be enormously profitable or frustrating. While an ordinary bull or bear market might continue for a couple of years, a secular bull or bear can last for a large part of your working life. These long-term market cycles are less understood than their shorter counterparts (the "cyclical" bulls and bears), but they have begun to attract greater attention as the Dow Jones Industrial Average closes in on new all-time highs.

To properly discuss secular cycles, it's important first to understand how they work and what they can do to the market. Here, you'll find a wealth of information, including multiple ways to identify the change between bullish and bearish periods and a few analyses of where we stand today.

Lesson 1: What is a secular market cycle, anyway?
To understand secular markets, it helps to first understand the way inflation affects market prices. On Jan. 14, 2000, the Dow closed at what was then an all-time high of 11,723 points. Just more than 13 years later, it hovers near 14,000 points, striving to set a nominal all-time high beyond that reached in late 2007, just before the financial system fell apart.

But the Dow's nominal closing price can be deceptive. What should really matter to investors is whether they've earned any real gains over the rate of inflation. That hasn't been the case since the Dow's dot-com peak -- in real terms, the index is still about 11% lower than it was 13 years ago, as you'll see below. Click on the graph below to open a larger version with more detail: 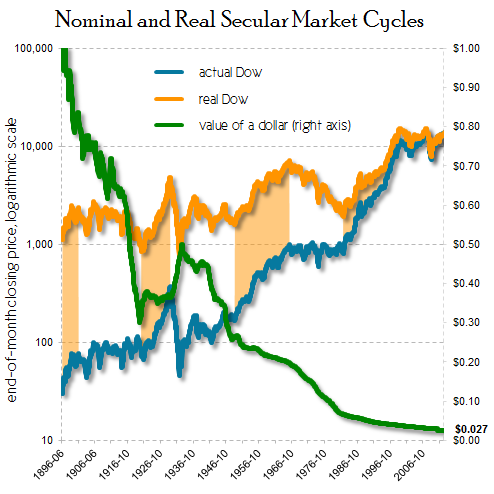 The difference between nominal and real growth is striking, but it should not be surprising to anyone with a basic understanding of how inflation works. What's most notable is how much more pronounced bearish secular trends become when laid out in real terms. The turn-of-the-century secular bear market was the longest on record for the Dow. In 241 months, the index lost 18% in nominal terms but 63% in real terms. The inflationary secular bear market of the 1970s is similar, losing 22% in nominal terms but 63% in real terms. Those terrible periods of long-term losses are more than offset by secular bull markets like the great boom of the '80s and '90s, which produced nominal gains of 1,400% that translated to a 685% gain when adjusted for inflation.

Lesson 2: What drives a secular market cycle?
We already know that secular markets cycles last a long time. The average length of all secular markets to date is 191 months, and the median length is 200 months. Nobody knows when the current secular bear market will become a secular bull, or whether that already happened in 2009. At 157 months to date, it's still the shortest of all modern secular markets, except for the spectacularly explosive secular bull of the Roaring '20s.

Why are these secular cycles so long? Some of this undoubtedly has to do with investor psychology -- particularly the way investing psychology changes from generation to generation. Two hundred months is nearly 17 years, which is about the time it takes for the children of one generation to become adults with jobs and mortgages and investment portfolios, and all that other good stuff.

A generation raised in the Great Depression returned to the market after World War II with far greater care than their parents, who rushed into stocks during the Roaring '20s. As a result, marketwide valuation, as measured by the cyclically adjusted P/E ratio (more on that later), increased much less than it had in the Roaring '20s, even though the economy actually grew at a faster rate. On the other hand, the children of those postwar investors had less fear and more faith, having grown up in an era of strong regulation and less real economic turmoil. The oil price shocks and "stagflation" of the '70s might not have been fun, but I don't think anyone would trade gas lines for bread lines -- or a higher cost of living for living on the street.

Today's psychology is difficult to discern in comparison to the shifts seen in previous generations. As one modern philosopher once said, "We have no Great War, no Great Depression." Many of the same characteristics that marked the '80s and '90s are still evident today, which could mean that today's secular bear market will be fundamentally different from the others. The Dow has only experienced four secular bear markets in its history. That's not a big sample size.

If we can't analyze the market's psychology well enough to determine its possible direction, we might at least be able to use fundamentals as our guide. The next two lessons should help us learn the shape and structure of secular cycles relative to several popular measures of prosperity.

Lesson 3: How does the economy affect secular markets?
Gains and losses don't happen in a vacuum. There are always multiple forces at work pushing a market in one direction or the other. GDP might be one proxy. Low growth should prevent the Dow from breaking out, and continued economic expansion would be likely to drive gains for an extended period. That's true, to a point. Click on the graph below to open a larger version with more detail: 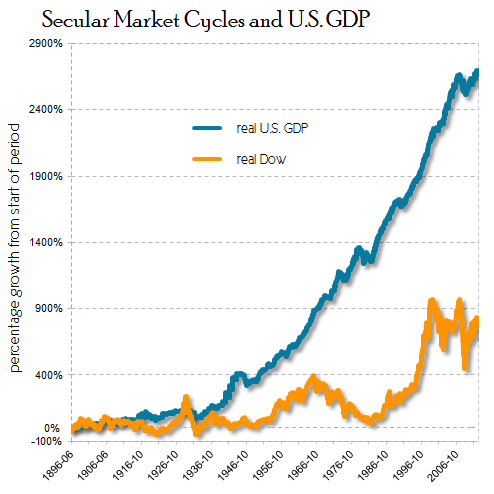 Unemployment might be a better guide. Let's take a look. Click on the graph below to open a larger version with more detail: 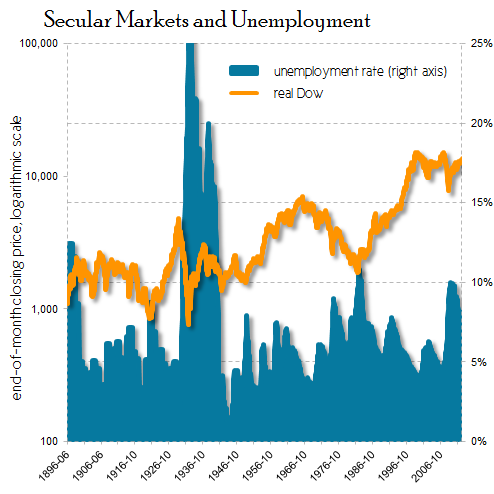 We might be getting somewhere. With the exception of the Great Depression's abnormally high unemployment spike, a trend appears to emerge where unemployment generally rises over the course of secular bear markets and falls during secular bull markets. But this analysis is still more reactive than proactive, as it's impossible to tell whether unemployment has peaked for a secular period until well after the fact.

Neither GDP nor unemployment makes a particularly good barometer of secular shifts. Corporate earnings might be a better proxy. Click on the graph below to open a larger version with more detail: 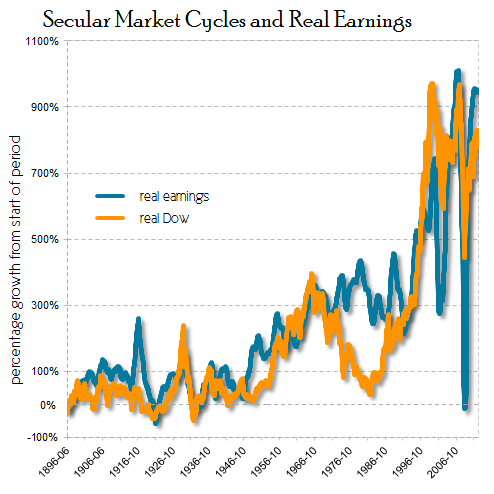 Earnings don't seem to be particularly useful. In fact, inflation-adjusted corporate earnings reached all-time records several times in the middle of secular bear markets. 2007's record earnings weren't enough to push the Dow beyond its inflation-adjusted 2000 peak, and the market soared in 1929 despite the fact that big businesses weren't making as much in real terms as they were in 1916. Changes have been made to the way earnings are reported over the years as well, which makes this a less consistent barometer than we might need.

It seems the economy isn't the best way to identify secular shifts. Let's take a look at the stocks themselves.

Lesson 4: How do stock valuations affect secular markets?
If you recall our bull market primer, you'll remember that Robert Shiller's cyclically adjusted P/E ratio, or CAPE, tends to rise during bull markets and fall during bear markets. What works in cyclical markets should also hold true for secular markets. Click on the graph below to open a larger version with more detail: 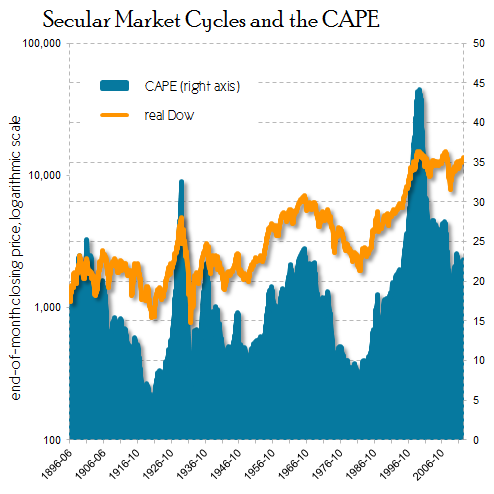 Now we're getting somewhere. The rise and fall of the CAPE, which was originally developed to track a historical S&P 500 (^GSPC -4.04%) composite, lines up quite well with the shift from secular bull to bear and back again. The total CAPE declines that occur during the three completed secular bear markets are remarkably similar -- the turn-of-the-century secular bear lost 80% of its CAPE value, the Great Depression era lost 72%, and the stagflationary '70s lost 72% as well. Meanwhile, both the Roaring '20s and the baby boomer secular bull enjoyed CAPE growth in excess of 500%.

The consistency of bearish declines should be concerning to shareholders today. The CAPE has already declined 48% from its bubble heights to the present day, and it's currently hovering around a value of 23. However, to equal the CAPE's percentage in the Great Depression and stagflationary secular bears, we'd have to fall to a final CAPE of just 12.2. Stocks might seem cheap now, but they have been -- and could be -- far cheaper still.

Putting it all together
It seems clear that the most accurate identifier of secular shifts is the CAPE. It also seems clear that clarity is difficult to gain, except in hindsight. Today's secular bear may already be a secular bull, and we won't know for sure until it crosses that inflation-adjusted threshold. On the other hand, the market could fall far from its current position after some unseen catastrophe or widespread shift in sentiment. At least you'll now be more informed about each possible future, whichever direction the Dow takes over the next week, month, year, or decade

Want to learn more about market cycles? You can find the rest of the series here: