There's much more to the market than just buying stocks.

In a general sense, every investor knows how the stock market works, and many investors know that long-term thinking is the key to success. But what happens to stocks when the madness of crowds takes hold? Smart investing is often as much psychological as fundamental, and understanding the market's psychology can be every bit as important as mastering your own. Today, the Dow Jones Industrial Average (^DJI 1.34%) is reaching for new highs. Next week, or next year, the market may take a turn for the worse. A shift in sentiment is inevitable -- but is it imminent?

In the following article series, you'll see some of the key behaviors of both bull markets and bear markets, as well as some of the major forces at work in the longer secular market cycles in which bulls and bears do battle. We'll start with the basics here and drill deeper in companion articles that analyze specific bull, bear, and secular periods. There are some fascinating lessons to be learned, whether you're just getting into investing or have years of experience. None of this is to imply that fundamental stock-analysis should be abandoned. However, it's important to remember that a change in investor attitudes can sway the performance of even the strongest stocks in ways that can't be explained through fundamental analysis.

Bull markets are typically marked by greater levels of excitement and speculation, and the tenor of news and analysis tends toward the positive side. Many pundits have looked (lowercase "F") foolish by predicting that prosperity would go on forever during a bull market or shortly after its end. Irving Fisher's claim that stocks had reached a "permanently high plateau" a month after the Roaring '20s topped out is one of the most famous examples.

The following graph contains a plot of every bull market period in the history of the Dow. Click on it to open a larger version with more detail in a new window: 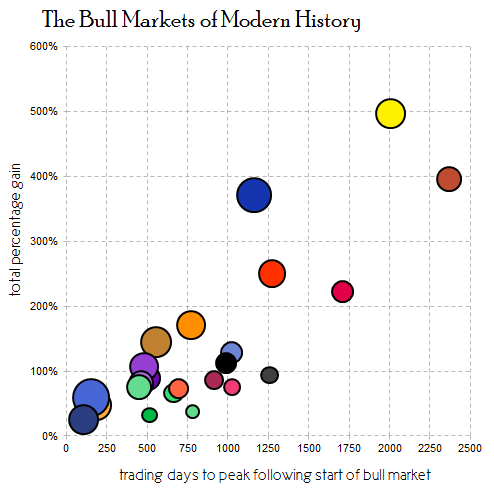 While some rare bull markets can run for nearly a decade without a significant correction, the median length of a bull market is actually slightly less than three years. In many cases, prices will double, or nearly so. The average gain in the Dow across all bull markets is 141%, and the median gain (which gives less weight to extreme and unbroken bull markets like those of the '20s and '90s) is 89%.

It's not just prices that grow during these periods. Marketwide valuations, as expressed by the 10-year cyclically adjusted P/E ratio, or CAPE, developed by Robert Shiller, show a distinct growth trend in nearly every bull market period. Click on the following graph to open a larger version with more detail: 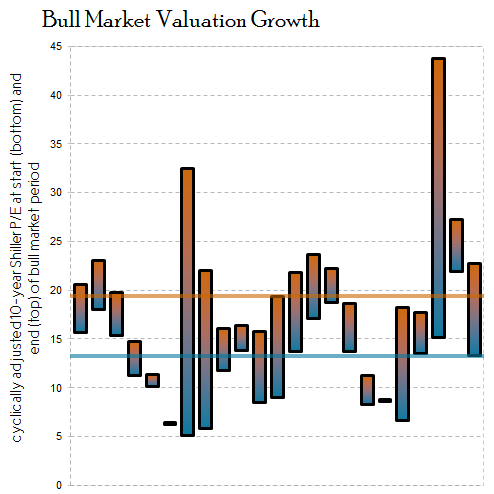 With the exception of two short, relatively shallow bull markets that took place in cyclical bear market periods (more on that later), every period of growth in the Dow has been accompanied by a marketwide trend toward higher valuations. The median growth in CAPE ratios across all bull markets is 35% from trough to peak, with a median low CAPE of 13.3 and a median final CAPE of 19.4.

For more detailed information on bull markets, including a brief analysis of each separate bullish period in the Dow's history, click here to read all about bull markets.

Lesson 2: What does a bear market look like?
A bull might be known for thrusting its enemies upward, but a bear prefers to knock foes into the dirt. Bear markets are thus known as periods of broad stock-price declines, which in nearly every case will result in a sustained period of index losses of at least 20%, typically over the course of several months or more. Bear markets, as you might expect, come with their fair share of public consternation and doomsaying. The optimism that rules the day during a bull market shifts violently into panic and fear. This negative sentiment often reaches a crescendo near the bear market's lowest point.

The following graph contains a plot of every bear market period in the history of the Dow. Click on it to open a larger version with more detail in a new window: 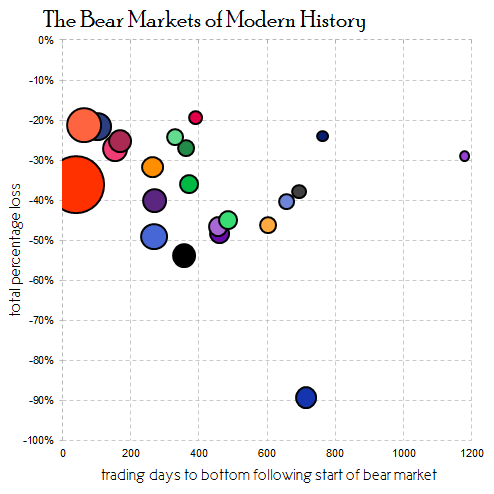 Bear markets tend to be shorter than bull markets, but they're typically more violent. While a bull market's median duration is 772 trading days, bear markets have a median duration of 367 trading days, which works out to nearly 18 months in real time (we investors enjoy our weekends off). During these periods, a bear market investor endures an average daily change in the Dow of 0.94%, compared with an average daily change of 0.76% during bull markets. That change can be either positive or negative. As a result, volatility tends to get more attention from the financial press during bear markets.

Bull markets typically enjoy CAPE growth, but a bear market will invariably suffer declining marketwide valuations. You might think this is the result of a recession undermining corporate earnings, but that's not always true, and significant earnings declines can actually hold valuations higher. A number of bear markets have occurred in spite of real marketwide earnings growth. Click the following graph to open a larger version with more detail: 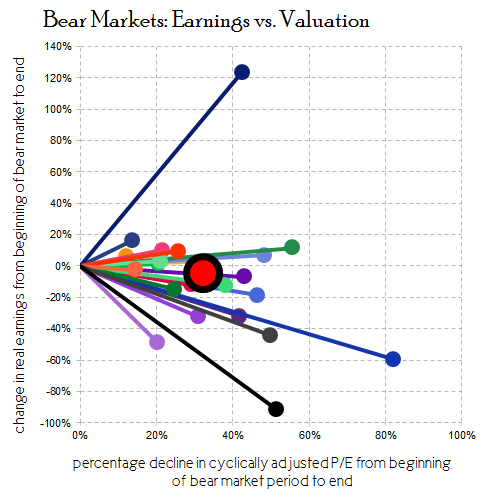 There have been bear markets on both extremes. A decline in stock prices after World War II was the result of valuation declines, not economic deterioration, as earnings increased dramatically despite a lack of buyers in the market. On the other hand, the most recent recession was by far the worst in modern history in terms of earnings declines. This had the effect of producing a lower drop in cyclically adjusted valuation than might have otherwise occurred, as the 10-year average is now skewed by several months in which barely any companies reported profits.

For more detailed information on bear markets, including a brief analysis of each separate bearish period in the Dow's history, click here to read more about bear markets.

Lesson 3: What are secular market cycles?
If bull and bear markets are ripples in the market, secular market cycles are its tsunamis. We call these ripples within secular market trends "cyclical" bull and bear markets -- which is to say that the periods we examined earlier are part of something much larger. It can be difficult to identify these periods except in hindsight, because the only way to know for sure that the secular market has changed from bearish to bullish is to discover that the market keeps reaching higher than it did at its last peak. Conversely, a switch from bull to bear tends to see a lot of movement in a certain range as the market tries and repeatedly fails to crest new highs.

The best way to determine whether a shift has occurred is to examine the inflation-adjusted value of an index, not its nominal present value. The Dow may have grown enormously since its creation in 1896, but inflation has reduced its total real gain to roughly 850%. This is actually remarkably close to the real growth of Robert Shiller's historical S&P 500 (^GSPC 2.02%) composite, which he prefers to use for CAPE and other analysis dating back to 1871. From 1896 onward, the real growth of both indexes is separated by about three percentage points. The Dow might be a more limited index, but it's not necessarily less useful.

Here's how the nominal Dow stacks up to its inflation-adjusted real counterpart, with secular bull markets shaded. Click the following graph to open a larger version with more detail: 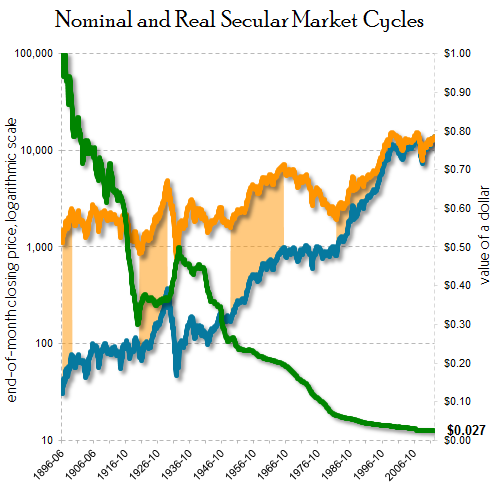 Keep in mind that the Dow's values are plotted on a logarithmic scale. While the nominal Dow begins at 39 points in our chart, adjusting for inflation brings its real value up to 1,426 points.

One thing to notice is just how long most secular market cycles are. The average length of all modern secular cycles is 194 months, and the median length is 200 months. That's a little less than 17 years -- about the amount of time needed for a new generation of investors to mature and enter the market. Children of the 1920s would have matured holding memories of a terrible depression caused by overleveraged over-speculation in the market, but children of the 1970s would have become adults having experienced rising standards of living only briefly interrupted by oil price shocks and "stagflation." This can help explain the difference in tenor between the various secular periods. The Roaring '20s doesn't look much like the more moderate postwar secular bull market, because many investors in the latter period were more conservative investors with less inclination to trust the market.

Another thing to notice is that we just haven't had that many secular market cycles. Most investors alive today have experienced six at most, though they may have experienced at least 20 cyclical bull and bear markets combined. That can make it hard to accurately identify similarities, because the sample size is so small. Do the secular behaviors of the 1950s still apply in 2013? It's impossible to know.

There's a lot more to learn about secular market cycles. For a more detailed examination, complete with plenty of graphs, click here to read "The Complete Guide to Secular Bull and Bear Market Cycles."

Lesson 4: What can you do with all of this information?
There are no hard-and-fast rules that guide bull or bear markets, whether cyclical or secular. However, there are a few basic guidelines that often hold true:

One way to assess greed and fear is the CNNMoney Fear and Greed Index, which can be a useful contrarian indicator. Remember that old Buffett adage: "Be fearful when others are greedy and greedy when others are fearful." Or, if you're a more violent sort, "Buy when there's blood in the streets."

Want to learn more about market cycles? You can find the rest of the series here: