Robert Shiller's CAPE is a widely cited metric for bearish arguments, but many investors tend to overlook CAPE's glaring flaws.

Investors are always looking for clues to the market's future. It's only natural to want to limit your downside while maximizing potential returns, but trying to time the market often ends badly -- you'll either miss out on a roaring bull market or dive after plunging stocks into deep losses. It's not easy to time a market, but there might still be ways to assess its strength and stability. As major indexes push ever higher toward record territory, one easy way to assess them is simple valuation -- the P/E ratio, or rather, the CAPE ratio: 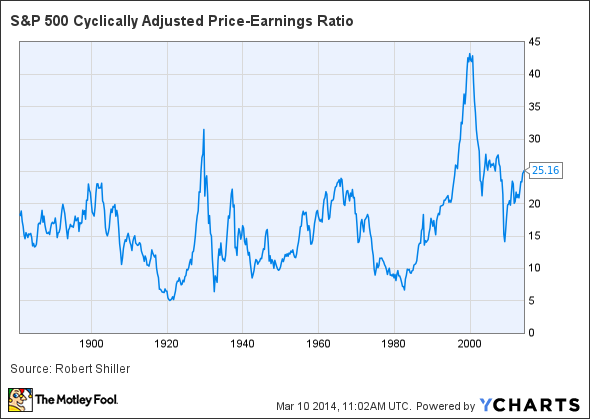 This well-known measure of marketwide valuations is the Cyclically Adjusted Price-to-Earnings Ratio, or CAPE, which averages the monthly closing P/E ratios of the entire S&P 500 (^GSPC 1.10%) for the last 10 years. Compiled by economist Robert Shiller based on data that begins in 1871, it's frequently used to indicate an overvalued market -- the current CAPE ratio of 25.16 is well above the median historical CAPE of 15.9, or the average historical CAPE of 16.5.

Shiller himself has cautioned against using the CAPE to time the market, as he views it more as a guide to future returns than an indicator of imminent crashes. That's not particularly encouraging, as a higher CAPE still implies lower future returns, and the S&P 500's present CAPE valuation is still quite a bit higher than average.

But the problem may not lie in the CAPE's unusually high valuation, but with the CAPE metric itself. After all, if the average CAPE valuation over more than a century is 16.5, then a market that spends virtually all of its time above that average beginning in the mid-1990s is either chronically overvalued or there is something wrong with our assumptions for what a "natural" average valuation ought to be.

It's important to note that today's stock market bears very little resemblance to the market of 1909, of 1929, or even of 1969. A small slice of the American population owned stocks for much of the 20th century -- barely 10% of Americans owned any shares in The Roaring '20s and only 15% owned stock by 1969. Today, surveys find that despite a marked decline from a peak of 65% ownership (reached just before the financial crisis), 52% of all Americans own stocks today, either as individual holdings in a self-directed portfolio or as part of a mutual fund or retirement account.

For our purposes, we can say that the "modern" stock market underwent two sharp breaks from its historic norms to become what it is today. The first break occurred in 1974, when the Employee Retirement Income Security Act  became law, allowing the creation of individual retirement accounts for the first time. A year later, the New York Stock Exchange ended fixed-rate trade commissions, striking the spark that allowed online stock trading to catch fire in the 1990s. Other changes to law and regulation further popularized these options, notably by expanding the tax advantages of IRAs to cover vehicles like the 401(k) plan. By the end of 2011, IRAs and defined-contribution retirement plans -- of which the 401(k) is most popular -- in the United States had swelled to include more than $8.8 trillion in total assets, which accounted for roughly 56% of the market capitalization of all companies listed on American exchanges at the time. So, what does the CAPE look like from 1974 onward? 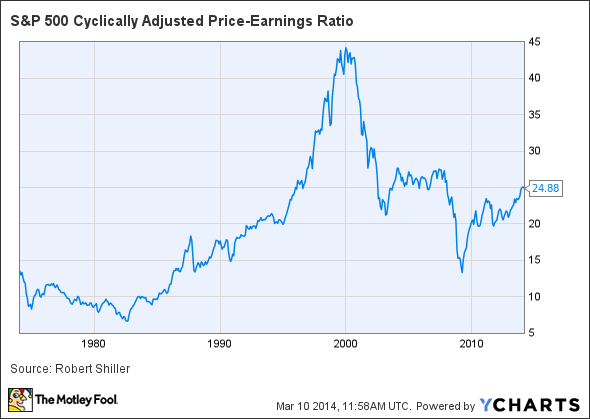 Updating our time frame to this period of broadened stock ownership gives us a new median CAPE valuation of 19.8, which is actually slightly higher than the average CAPE valuation of 19.6. By this measure, the CAPE isn't 58% overvalued, but 28% overvalued. A return to this modernized median would drop the S&P 500's price by 22%, which is relatively mild compared to the 37% crash required to bring the CAPE back into line with its century-plus median.

There are other ways in which the CAPE might be considered less than perfect for assessing market-wide valuations.

The original Jesse Livermore was a notorious short-seller known as the "Great Bear of Wall Street" who made a reputed $100 million during The Crash of 1929. The new Jesse Livermore is a pseudonymous author of the Philosophical Economics blog and has written extensively on the inconsistencies of the Shiller CAPE metric:

[Shiller's] data are taken from S&P "reported" earnings, which are formulated in accordance with Generally Accepted Accounting Principles (GAAP). But the standards of GAAP have changed significantly over the last few decades. ... In the old days, GAAP required goodwill amounts to be amortized -- deducted from earnings as an incremental non-cash expense -- over a forty year period. But in 2001, the standard changed. FAS 142 [a statement of accounting rules issued by the Financial Accounting Standards Board] was introduced, which eliminated the amortization of goodwill entirely.

Livermore uses several charts to compare GAAP reported earnings to pro forma earnings, which exclude unusual or nonrecurring transactions. These two metrics were virtually identical for S&P 500 stocks until the introduction of FAS 142:

What impact does this have on the Shiller CAPE? It's fairly significant from the turn of the 21st century onward:

Using this relatively straightforward adjustment, Livermore produces a new CAPE figure, current to the end of 2013, of 20.6, which is about 19% above its historical (1954 onward) average of 17.4. Shrinking our viewpoint to 1974 and onward might not modify this result significantly, as the S&P 500 spent much of its time from 1954 to 1974 above its historic averages.

When you change your viewpoint to examine some of the S&P's largest-weighted long-term components, you'll find that in many cases, long-run valuations (you can calculate the CAPE for individual stocks as well) are far below their average over the past two decades: 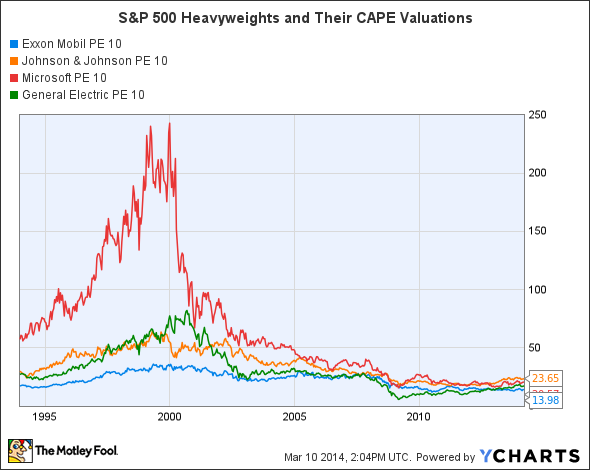 ExxonMobil (XOM 4.02%), Microsoft (MSFT 3.07%), Johnson & Johnson (JNJ -0.37%), and General Electric (GE 0.43%) are all significantly below their long-run CAPE valuations, despite operating in far different parts of the economy. All four of them have seen their CAPE valuations fall for much of the past decade, although in each case valuations have stabilized since the end of last crash. There may be a number of high-flying stocks pushing the S&P 500's aggregate CAPE ratio higher, but for investors in the index's largest components, CAPE valuations still indicate that it's one of the best times in decades to be a buyer.

The stock market may be overvalued, but the degree of overvaluation is important, as is the breadth of overvaluation across all stocks. This might not be the best time in the world to invest -- but the market's hardly stuck in the same dangerous territory of the dot-com era, or even of pre-financial-crisis times.

2022 Was the Worst Year Since 1937 for This Investing Strategy: Here's What History Says Happens Next

The S&P 500 Just Had One of Its Worst Years in History. Here's What Usually Happens Next

These Investing Lessons From 2022 Should Stick With You Forever

Has the Stock Market Hit Bottom? Here's a Better Question to Ask
397%